In my review of Nights of Cabiria, I noted that Federico Fellini grew more fantastical and whimsical with age, and he became forever less entombed in the limits of pure realism. True, and it might be assumed that with whimsy and fantasy come happiness and warmth. To some extent, they did; Nights of Cabiria ends on one of the most singularly uplifting notes in all of cinema. But whimsy does not automatically imply joy, nor a new leaf. Fellini was still an angry, tormented, complicated man; he had simply developed a new filmic vocabulary for exploring his emotions, whatever emotions they may be. New storytelling mechanisms dictated how he would explore emotions, and not what emotions he would explore. His application of Hollywood romance and Italian/ French romanticism was not always an uncomplicated acceptance, but more often a dare. Fellini would follow romanticism and melodrama to their limits and see if he could come out the other side a believer. With La Dolce Vita, melodrama is a slaughterhouse, and you unravel from the other side in shreds. END_OF_DOCUMENT_TOKEN_TO_BE_REPLACED 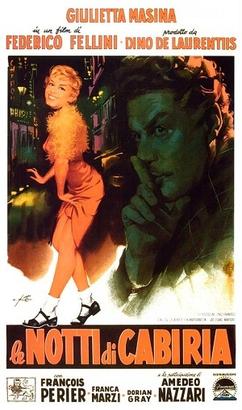 Federico Fellini, the grand master of Italian cinema, began his life behind a camera as a young lad among the neo-realists, a protege of sorts to De Sica and Rossellini and their own habits of redefining cinema forever. Fellini, like those masters of the form, sought to reject Hollywood convention and lay down a thick layer of everyday humanity with non-actors and grungier camera techniques less galvanized in Hollywood glamour and melodrama. This shift itself was a towering upheaval to the cinematic tradition, a tangible stimulant to directors everywhere to shake the foundations of film land and brace for impact.

But Fellini was not done shaking. The neo-realist movement, for him, was a jumping off point, a stepping stone for his own more whimsical, more blunted, and dare I say more challenging vision of what cinema ought to be. Beginning with the seminally shattering La Strada in 1954, Fellini married a form of realism to a carnivalesque wonder and an omnivorous desire to break with reality when it could help the emotional truth of his story at the expense of conventional logic. END_OF_DOCUMENT_TOKEN_TO_BE_REPLACED