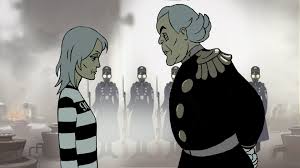 Poor The Congress. Too unapologetic to be bad, too bad to work without apology. One’s appreciation for The Congress requires a certain leap of faith, a certain acceptance of failure. It is a questionable movie, and if it was less questionable, it might just be much less worthwhile than it is in its current, unfinished state. It is a fearless attempt to develop a new cinematic lexicon for understanding stardom and the very idea of sense filtered through the human eye, and because it is so lost in its own head, it can probably never function as a normal, fully adjusted, wake-up-and-go-to-work movie. Rather than a finished film proper, it an altogether rarer, and more useful sight: a filmmaker lost in their own eternally young interpretation of the world, tempting their own mind to figure out what that world actually consists of and developing a heretofore unseen cinematic visual prism within which to decipher that world.

First we must ask: what nominal form does it take? An exceedingly metatextual form, and a playfully metatextual form, although it plays at a decidedly caustic tempo. Robin Wright plays a slightly fictionalized version of herself who is struggling to survive in the Hollywood world of contractual obligation, personality psychosis, and age tearing down the social conception of the female body once it passes the tender age of 40. Wright’s character brings along not only her physical form but her identity, including the roles she has played in the past and, most notably, her public image as a difficult, troublesome actress prone to entropic moments of mercurial disagreement.

Wright is struggling with her son (Kodi Smit-McPhee), who has Usher syndrome and is slowly losing his sight and hearing, and she is presented with a potentially alleviating offer: the world of actors and actresses is in decline, and studios (such as Miramount, a clever portmanteau of Miramax and Paramount) are genetically scanning their likenesses and personalities – as well as seemingly the personalities of the characters they played in the past – to star in films for all eternity without aging, and so they can hold full control over the actor’s image as a computer product. The actor’s image becomes a character, a fictional product controlled by the computer and the corporation; the actual human performer becomes just another person, and they must agree to never act again. Wright eventually agrees, but when she is set to resign her agreement 20 years later and is presented with a deal that will allow anyone to adopt the physical visage of her younger self, her only recourse is to speak out. And that is only the first half of Folman’s brew. Where it goes from there, you’ll have to figure out yourself.

Folman’s film is a cluster of boundless vision and bungled ideas, but it has charisma, and it has commitment. He reaffirms himself as a truly unique cinematic visionary, if a somewhat muddled one. His film tackles identity, celebrity, humanity, and freedom of choice in ways both abstractly nebulous and unnecessarily concrete. It stumbles between profoundly subtle visual gestures and exceedingly, sometimes morbidly, obvious diatribes about Folman’s chosen theme of the moment. It is a very, even deliberately confused film, but it has the courage of its convictions, especially when Folman jumps the gun and deconstructs the raw space of his geometry by reworking his world into an animated fable about aging and the obtuse, alienating ways humans – especially wealthy, famous humans – go about pursuing their immortality and their youth.

For Penn, it is a remarkably challenging, contorted role of equal parts icy sincerity, self-hate, and self-apologetic exploration, asking her to critique the Hollywood system that brought her up only to in turn critique herself for even considering the process of turning herself into a computer program, rather than simply walking away. Folman’s film does not excuse her, even though it traffics heavily in empathy for her role as a victim in a system that has turned her into an egotist. It reminds, ultimately, that whatever distress her conflict puts her through, it is still a privilege for her as a wealthy woman to have the freedom to choose to create an endlessly young vision of herself, even if it be through a computer.

But for all Wright’s marvels as an actress here, it feels like a work that could only ever “belong” – if it belongs to anyone – to Ari Folman, who has gotten ahead of himself in certain aspects of his commentary on personality and image as far as his screenplay is concerned. The earlier portions of the film, which rely too heavily on proving the science behind the visual imaging technology and on obvious monologuing about the film’s passion-of-the-moment, are unsuccessful to say the least. But, even if it never becomes a cohesive whole, Folman the visual stylist and cinematographer Michael Englert soon take over and lash out at us with pure cinema, right from the scene where Wright is herself scanned, a harsh collage of piercing white lights and terrifying black pulses that sap her of humanity and turn her into an assembly line of hashed-out angles and lines.

Beautiful it is, but championing the film for its beauty feels a little like a critic playing a spider to the fly. The film is beautiful, but not in a light, pastel-infused, gilded-Disney sense of the term. It is, instead, a resolutely, unapologetically uncomfortable, disconcerting monster. Right from the very first shot the film pays uncharacteristic attention to Robin Wright’s angular, weathered features. Opening on an exceedingly punishing close-up of her face painted in a garish, sickly yellow hue, it makes no qualms about exposing the voyeuristic way in which we both worship at the cult of the modern celebrity and then tear down any object we find in our crosshairs – any celebrity – when they don’t meet our standards for celebrity beauty, and especially, female celebrity beauty.

And the animation – Folman’s most pertinent, punishing cinematic achievement in his previous film, the incomparable Waltz with Bashir – is no prettier. It is gorgeous, mind you, but in a deliberately difficult way, rereading early ’30s Fleischer studios animation for grotesque, acidic garishness and openly invoking the nightmarish surreality of early American animation studios as a commentary on the increasing irregularity and formless non-reality of a life lived through an image in a computer. Frequently, the film overloads on psychedelia until we are merely looking at a technical showpiece and not an ambitious deconstruction of technical showpieces (a flaw that never beset Waltz with Bashir). But for much of its descent into a neon, noxious cloud of decadence and discomfort, the animation is a perfect cinematic language by which to dissect the film’s dozen-or-so chosen pet themes.

The film that serves as the vessel for Folman’s talent as an animator isn’t perfect, and frequently it isn’t necessarily even good. But we ought not denounce this sort of grandstanding, idiosyncratic filmic invention and explorative storytelling. It may not succeed on its own terms, but it moves the medium forward. In the end, cinematic progression is important. In the end, it is what makes the house of cinema a home.