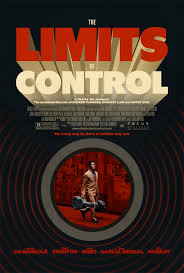 It is from time to time the case that a deliberately pretentious film snob such as myself may emphatically defend a film for its ambitions, for its aspirations to discuss cinema, or even for its accidents and failures, and casually wash away its alienating disagreeability in doing so. I am not, frankly, sure that Jim Jarmusch’s The Limits of Control applies here, although I am about to emphatically defend it for all of the above. I am not quite sure it says anything about cinema, however, so much as it says something about Jim Jarmusch, and about nothingness. Watching it is an experience in willful alienation, an auteur constructing a film for his own interest more than anyone else’s. It is a peculiar, obtuse curiosity. It is also an important one, although not necessarily for its ambitions.

Largely because, depending upon your view of the film, it may be either the very definition of “ambition” or its very antithesis, which is the central dialectic around which The Limits of Control circles. Jarmusch is just about the most willfully difficult English-language filmmaker working today, and The Limits of Control may be his most distant film. It boasts none of the playful cryptic diabolicalism of something like his masterpiece Dead Man, a disassembly of the Western genre and all fiction at a core structural level. The Western as social theater, it was, and his aesthetically sensuous films have followed suit until then. Decconstructive aesthetic, sure, but aesthetic nonetheless.

The aesthetic of The Limits of Control is punishing minimalism to the point where it arguably doesn’t even apply as aesthetic at all. It is close to anti-filmmaking, even to the point where it intentionally avoids functioning as an object in and of itself. We watch Isaach De Bankole – infusing the role of a robotic man with existential sangfroid and ice – accept a contract to do something, journey to a hotel, and converse with other people about endlessly theoretical and referential, even arbitrary topics that nominally relate to one another in only the most finicky and tentative of ways. Near the end, he makes good on his contract, but the film is much more invested in how it can avoid getting him to that point – or avoid us getting to that point – than in moving anywhere.

Specifically, it is a study in how little a film has to do to tell a story, and how films relate to other films. An experienced viewer will be aware of our protagonist’s monomaniacal goal, arguably even before the movie starts. The film was the first release of Jarmusch’s PointBlank Films, and the name seems to have been chosen solely as it exists in relation to this film; everything about the piece recalls John Boorman’s seminal 1967 crime film Point Blank. The same is true for the cinematography by Christopher Doyle (of notable relation to the reigning master of shape and color in all of cinema, Wong Kar-wai), which is as studied and literate a riff on the films of Jean Pierre-Melville as one can imagine, so much so that it refuses to take on a life of its own. It is a study in what it takes to pantomime a style, essentially, a chilly exercise in expression.

Even more than in Dead Man, this film’s version of Spain exists more as an abstract theatrical showpiece or a set than a physical space (there are literal cues that it is a work of art, and implicitly, a presentational commentary on the fact that we are watching a piece of art rather than a reality). Limits is beautiful on its own terms, but the effect of its beauty is largely driven by the relation of that beauty to the beauty of other films, and deliberately European films at that (Melville, again, and Point Blank). We are meant to read the beauty through the prism of the idea of what films like this are supposed to represent – the existential crisis of an assassin, largely – so that the film itself doesn’t have to meaningfully tell us that we are watching a film about an assassin. All it has to do is show us people watching, walking, and waiting, and we are meant to do the rest.

Which is where the minimalism comes in, and what ultimately makes it work, unlike so many other lo-fi indies that utilize minimalism to convey naturalism or realism for the sake of gussying up a story in “seriousness”. Unlike those films which use minimalism for the sake of story, The Limits of Control adopts minimalism for a study in minimalism as a deconstruction of minimalism. There is no narrative – only our main character waiting, and occasionally meeting with a contract who converses with him, frequently wielding the same dialogue as the previous conversations in a study in repetition and a filmic self-commentary. (Tilda Swinton shows up in a conspicuously false blonde wig and namechecks an Orson Welles film in which she might have been a character). More than anything, Limits is a study in how much energy a film can draw from referencing other films; it is a study in how audiences define the meaning of an object, in this case Jarmusch’s film, through the prism of other similar objects, a study in how no film can truly “stand alone” because audiences will always relate it implicitly to other similar works. So much so that, for someone who isn’t aware of those other films, The Limits of Control is an arbitrary, nihilist, probably useless creation.

Other moments approach self-satire, such as the frequent incursions by Paz de la Huerta, who is exclusively naked throughout the entire film, tempting our protagonist in a wholly artificial manner, showing up more like a dream he witnessed in an old French film than an actual being in this film (her introduction is a literal-minded recreation of a famous scene from Godard’s Contempt). The film makes a point of photographing her with a plastic sheen, making her whole existence look fake, something clarified when she wears a transparent plastic overcoat that might as well blend in with her skin. Certainly, Doyle and Jarmusch are sensitive to the needs of space, sound, and color, and their film plays out like an experiment in all of the above, taking the droll humor of Dead Man and dusting it up even further until the whole film feels intentionally parched. It is an odyssey of the driest variety, with De Bankole’s rectangular, heavily-lined head a marker of his rectangular, heavily-lined identity (repetition, by the way, is a structural member of Jarmusch’s party, and a similar element of explorative satire about the limits of proper storytelling and this sort of chilly Melville-inspired non-narrative).

In the end, the name tells us all. The Limits of Control is nothing less than a study in the limits of filmmaking and directorial control over a subject, a study in how little a director can do for his “film” for it to qualify as a film at all, a study in how much that director can rest their film on the shoulders of other films. And a meditation on the idea of waiting for action, a meditation on how narrative is defined in the moments between events, rather than the events themselves. Certainly, it isn’t for everyone, and not necessarily even for the most pretentious of cinema snobs. But, as Jarmusch seems to know, the journey is sometimes more rewarding than the destination. Or maybe it isn’t rewarding at all. Thus is the fundamental dichotomy of The Limits of Control, but anyone with an interest in cinema should see it.