Ernest and Celestline is a children’s film, and damn proud of it. Light, frothy, and bolstered by the elegant simplicity of a storybook brought to life by watercolor and sketchbook, it has absolutely no airs, and yet it exists with its head in the clouds. The story is note-perfect in its simplicity: a bear, Ernest, and a mouse, Celestine, are both outcasts – Ernest a poor loner who lives on the outskirts of his society and Celestine a young, seemingly orphaned dreamer who dares to interpret bears through a lens of whimsy rather than fear. The two meet up and form a friendship, become a furry, feral Bonnie and Clyde, and discover a home in the process.

Yet even phrases like “discover a home” undersell this French-Belgian production’s low-key beauty and eternal innocence. It’s tempting to compare it to Miyazaki’s My Neighbor Totoro, and the hushed tones, warm colors, barely-there narrative, and show-not-tell character of this film have studied their Miyazaki well. But Ernest and Celestine’s  heavily lined, barely composed animation adds a new layer of near-impressionism and feathery fairy-dust to the material. If it is a story of two characters “discovering a home”, it has the simple charisma and lackadaisical  spunk of two characters hanging out.

And what a lovely hang out session it is, drawing out compassion and and care from the simple pleasures of childlike glee and lazy, scrappy time with friends and family. The narrative does move on from here, for instance to a number of hashed-and-etched nightmares and a rather lovely climax in a bifurcated courtroom session that cleverly delineates the similarities in the two cultures. But a film of “story” this is not, positioning itself instead as a lower-key Winnie the Pooh, characters drawn in simple broad strokes, on the inside and the out, as if by children, and the film has the undying spirit only a child could. Not that the film doesn’t know consequence, but it pairs it down to its most leisurely base level with the direct truth of a child’s fable.

The real star of the film, however, is the purity of the look, like a half-finished sketchbook colored in with thoughts and inclinations more than determinations and demands. Throughout the film, many frames feature color only in the center, with the idea of the scene bleeding out into bare lines and white space around the edges. The effect is not only lovely on an aesthetic level, but highly pointed for the purpose of the mood; it centers in on the emotional “truth” of a scene and quite literally boils sequences down to their bare essentials of form and emotion. It approximates the way a child thinking directly of a moment or idea might hold to it without even thinking of the rough edges around the side.

At its heights, it is a style that leads to supreme emotional directness – for instance a late-film sequence where our two heroes run up to each other and hug, the outside colors around them draining out to frame the two characters with nothing but white around them. It has the effect of pure beauty, the two characters at the center of the frame and nothing around them. For in that moment, when Ernest and Celestine meet up again, nothing around them matters one bit. The film’s visual style, with motion being colored in temporally through intuition and emotional affect rather than realism, explores and recreates feeling and how it relates to space and time. Again, simple and beautifully elegant, but with heartstrings set to pull and technique and subject in perfect unison. Ernest and Celestine is a little film, but it has a big, wide-eyed imagination, and a crystal clear heart. 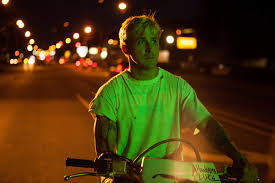 The Place Beyond the Pines

A tripartite examination of consequence, choice, and social determinism, The Place Beyond the Pines is Derek Cianfrance’s personal statement against the norms of individualist storytelling. Taking up the bifurcated, time-shifting story of Blue Valentine (along with one of that films’ stars for what is by a country mile this follow-up’s best segment) and running with it, Cianfrance intentionally stretches out and sacrifices a narrative center. The first portion of the heavily episodic story looks at local motorbike showman turned criminal Luke Glanton (Ryan Gosling) struggling to do whatever he can to provide for a son he discovers too late. The second follows a police officer, Avery Cross (Bradley Cooper), who crosses paths with Glanton at an unfortunate moment for both and has mixed feelings about his actions at the time. The finale jumps forward in time and splits the difference between Luke’s son Jason (Dane DeHaan) and Avery’s offspring AJ (Emory Cohen).

Yet it’s less a story of individuals than in community as manifested in specific ciphers, and if Cianfrance has an aesthetic, this humanist blanketing approach to widely drawing in every character he can may be it. That, plus no small dose of particularly anguished, brittle melodrama, but more on that in a bit.

Although it makes certain stipulations for propriety’s sake, The Place Beyond the Pines largely stands by its storytelling mechanics, even when they become slightly ungainly as this Cerberus of a product smashes and burns toward its conclusion. The opening forty-or-so minutes are the film’s best storytelling, being tight and form-fitting and tempering Cianfrance’s penchant for over-reaching manipulation in quietly plaintive hushes, a few moments of bravura directing (the showstopping car chase and the more haunting one-shot opening in particular), and star Ryan Gosling’s unmatched skill for powerful non-acting and picking roles that need an absolutely expert non-actor to grow on you. The early portions aren’t great  cinema, but they are watchful, heightened cinema and on their own terms highly successful as low-key character-focused drama.

As the film moves forward, things threaten to go off the rails. The middle segment, the film’s longest and would-be centerpiece, is a little less assured, losing some of the social-realist poetry of the earlier bits and trading them in for the kind of semi-bro crime drama we’ve seen far too frequently over the past few years, the kind all invested in dudely dudes loosing their soul for power and the sort of film not particularly invested in taking up an actual perspective on this trade-off. It’s in the final segments however where things truly lose their way. Counter-intuitively, and fortunately or unfortunately depending on your perspective, the film goes awry precisely because Cianfrance seems most impassioned toward the end. Perhaps it is for the best that he cares most here, seeing as how the story of two boys coming to terms with their fathers’ sins is the focal point of his narrative form. But it simply does not work as drama, free-wheeling back and forth between sloppy, low-key storytelling, raving melodrama, and forced and unearned symmetry to cram Cianfrance’s story back into place in some particularly labored ways. It is a man so committed to his vision he forgot to stop and see if good taste told him to rush forward or slow down.

This final segment, incidentally, is the perfect metaphor for the film: contradictory, singular, a bit mad, and not wholly effective in the final analysis even as it is completely and entirely the film it absolutely wants to be at every step of the way. It has too much dead weight to function as a proper narrative, but it is ambitious and its inconsistencies and sloppiness seems to be part and parcel with an actual personal vision and sense of purpose slightly unhinged rather than a hack wallowing around in the doldrums of tepidity. If it doesn’t all come together in the end, it is through no fault of Cianfrance not trying. He needs some refinement, and a better editor, but no one can say he isn’t constantly committed to himself and serving as a check to frail, ho-hum cinema in the process.