Or: a couple of short reviews I had penned and linked together in one of my patented “just made up on the spot” combinations, namely that they are both products of 2005, they are both depressingly cynical and nihilistic modern reflections of the long history of their respective genres, and they, respectively, fit into the genres I’ve covered in the past couple months: the western and film noir. Again, don’t think too much about why I posted these films together. Just enjoy the ride. 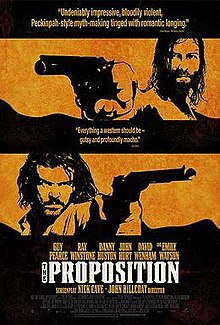 The significant resurgence of the Western genre since about 2005 (for reasons I’m not entirely sure of) is one of the few truly surprisingly revelations from the cinematic world to be found this past decade. It’s all the more notable particularly because the Westerns themselves have taken so many different forms, from pure, effervescent myth-making, to black-hearted heaving gasps of grimy moral decay, to slowly gliding, almost Impressionist location tapestries where characters serve merely as extensions of the environment, to plain ol’ rootin-tootin shoot em’ up character studies.

One of the first, and among the absolute best, in this trend was John Hillcoat’s rusty nail mauling of the gaping, open wound flesh wound of Australian history, The Proposition. It wouldn’t emerge the best Western over the past ten years (my vote would probably go to the sensuous The Assassination of Jesse James by the Coward Robert Ford), but it’s within earshot of the title. Considering the film’s swaggering aimlessness and rough-around-the-edges decay, it may even graze that ear.

John Hillcoat’s coming-out party as a  masterfully psychotic director (aided significantly by his close working relationship to musician and now subversive screenwriter Nick Cave) is a jarring, disconcerting film that couldn’t have but been birthed by the very muck of the history of Australia it represents. It manages to be both terrifyingly earthy and grounded as well as surreal, episodically monotonous, and chillingly moody. It draws out a specifically neo-colonialist fervor like few other modern works and proceeds to disembowel it, even as it essays a hellish netherworld of impenetrable loneliness and crimson-soaked malaise more applicable to dreams than reality. The film knows not the idea of cheerful color – its world is grainy, grimy, incorrigible, and eternally brown. Even the blood can’t retain its purity; it mixes with mud almost immediately upon hitting the ground, as well as the almost-as-thick dust kicked up in the air before-hand and galvanizing everything it touches. It’s as if the dust is the Earth rising up in the air, grasping anything and taking hold so that it can return it to the muck from whence it came. It’s a land of rugged masculinity and whiskey-soaked justice revealed as pointless, pitiful egotism and wasteful wheel-spinning, an anti-Western of horrifying potency and dreamlike poetry.

Especially in a late scene framing a pristine “civilized” picket fence in contrast to the rugged decay of the outback and revealing the similarities between both, the film bears strong echoes to The Searchers in its exploration of racial double standards and the blood-soaked lies of civilization. Make no mistake: this is as bleak and nihilist as the genre, which was long ago implicitly constructed to legitimize the American Dream, can get. It is not for those who find nihilism too oppressive or unethical. It not only explores nihilism but universalizes it: it shows the Western isn’t an American dream, but a colonialist one shared by the entire Western World, and it isn’t a dream, but a nightmare.

Rian Johnson’s feature film debut centers a classic film noir in a modern-day high school, but it’s no gimmick, nor is it a parody. This is as stone-cold noir as it gets, armed to the teeth with slanted, frigid camera-work, icily cold characters, and caustic, brittle dialogue. It has a nihilist streak a mile long. This isn’t noir by mocking it (The Long Goodbye) or paying homage to it and reading it past itself (Chinatown; both of these are better films, before anyone asks) but by testing it and finding its limits. Brick transposes the firm and proud artifice of noir to a more realist setting, and in doing so it unearths the scary, unnerving necessity of artifice for humans to survive in any reality, especially a modern one.

More specifically, the film posits that the modern high school is less a reality than a hell-scape of nightmarish human distance, with kids not only setting up facades as noirish “types” to fit in, but those types having subsumed themselves into the characters of the kids so that nothing else but the cold, caustic, mocking bitterness of the type remains. It doesn’t so much criticize them though as see a world which has nothing left for them but this cold callousness. Within, it captures the spirit long held as truth deep down in the noir core: when the world is crashing down on you, nihilism may not only be acceptable but in fact moral. This isn’t a particularly justifiable claim itself, as far as morality goes, but it is cinematically riveting in the spirit of the great genre riffs.

I could go into plot and character specifics, but they are so mythically archetypal that doing so would seem to miss the forest for the trees. Brick’s import is its overpowering atmosphere and sense of menace, not a twist of the plot or a character of surprising depth, even if the film has both tucked deep within its charcoal shadows. The film’s evocation of a modern society where humans have nothing left but to pretend to be the film characters that inhabit our dreams and nightmares is soul-crushing. It implies, with no irony, that just as noir really does speak a certain truth about mankind, humanity is as quick to subsume itself under layers of artifice, to hide – behind layers of prosthetic movie-speak and life-by-proxy –  the anxious fact that there’s nothing left underneath.

In this regard, it’s as much a high school film as a noir, and it explores points other modern teen films that flaunt their deconstructionist bents have made with a lame wink time and time again. Only, it takes those films, smacks any semblance of a smug smile off their face, and replaces it with steely, unnerved blank state that would be soul-deep if there was a soul to see underneath.

High praise, but this isn’t a truly towering film – it doesn’t, unlike Chinatown, peel back the layers of cynicism to something more caustically humanist. And insofar as people may take the film as an endorsement of modern society’s fascination with standoffish cynicism, irony, and cool rather than human warmth, it’s also bad morality (although this film’s attitude toward its events is far more nuanced – it’s not an endorsement of such cynicism so much as it is a scary reflection of its place in modern society, and the fact that, for all its difficulties, such murderous cynicism has come to arouse us whether we like it or not)  But, even if it has questionable implications, the other question remains: is it good filmmaking? Yes. The whole affair positively howls with dark energy.