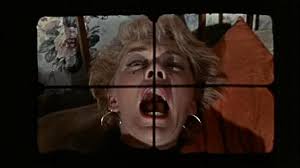 Like The Night of the Hunter, Peeping Tom essentially ended its director’s career (although Charles Laughton was not of the same caliber as Peeping Tom’s Michael Powell, easily one of the most respected British filmmakers ever). And like The Night of the Hunter, that fact has unfortunately overshadowed the quality of the film underneath, for both happen to be among the truly great social nightmares of our time. This 1960 masterpiece is an excruciating descent into the mind of a killer and an unnerving look into the secrets people keep behind closed doors. It is also ultimately, an act of filmic deconstruction aimed squarely at the cinematic gaze. Peeping Tom is not only effective due to its ahead-of-its-time first-person murder sequences (the film’s proto-slasher killer films his victims as he kills them with the pointed edge of his camera tripod), but it also begs hair-raising questions about the nature of voyeurism and contains one of the creepiest film performances ever in Carl Boehm’s Mark Lewis, easily on par with Anthony Perkin’s all-time classic interpretation of Norman Bates in Psycho, released in the same year. Still, for all its spellbinding strengths, it is so often overlooked. Perhaps it is for the best, for it leaves Peeping Tom always lying in wait, always looking on from behind, always leering and breathing heavily and skulking about around the edges. Maybe that is where it belongs; approaching it head-on is a tall, demanding order. But few tasks are more rewarding.

Michael Powell wasn’t known for directing horror movies, but his earlier films, most notably The Red Shoes and Black Narcissus, are graced with the language of nightmares.  Both are horrific in their own descent into the surreal, garish realities of oppression and obsession. Powell was known for his softly oppressive use of explosive color to construct over-the-top, hyper-realized sensationalist visual schemes that brought locations, characters, and the tension, deceit, loss, and all the other factors that makeup humanity to life – he constructed anti-realistic films that dance in a world of abstracted emotions, as hauntingly nightmarish as they were oneiric and dream-spun. He saw in color the intangibles: the redness of lust and temptation, the darkness of loss, a sickly green decay, all floating around in the air around his characters which they couldn’t see but which they could feel.

Powell made the conceptual and intellectual gnawingly immediate by revealing it to us in everyday tangibles, most of all location. His films were intentionally theatrical and stagey, filmed with bright, artificial, passionate colors that simultaneously masked and gave life to the hidden nuances of the emotions bottled within. This was intentional; it emphasized the performative artifice of everyday public life, contrasted with the repressed private it and his colors inevitably bled into it. Here the location isn’t the geography-of-the-mind mountain-top monastery in colonial Tibet of Black Narcissus. It’s whatever wanders through the lens of a camera as a reflection of a particular human’s own repressed private childhood, blood-curdlingly manifested in his obsession with film.

The film’s protagonist is Mark Lewis (Carl Boehm), an asocial, lonely man who works by day at a film studio and takes his camera home by night to film his own actions: murder. He pretends to rent a room in his father’s old house so that the other tenants don’t ask for him as the landlord, even though he serves that role as well. He prefers to be alone, spending his time watching old videos. The subject of those videos: himself, as a child, when his father, a famous psychologist who was rewarded for his work, psychologically tortured Mark and captured his fear on camera. Lewis is clearly damaged from this experience, left a social outcast who wants nothing to with humanity. Except that he wants to control them, not through a pulpit or a gavel or a board of directors, but through a camera. He wants to tell them what to do, as his father did, not by literally stating it but by making them feel it, by making them feel fear so he can entrap it on his camera and, perhaps, hopefully, achieve the recognition his father had found.

Peeping Tom, like most of Powell’s other films (which were co-written and directed with Emeric Pressburger, although this one is Powell’s solo affair), is about obsession. He explored Britain’s obsession over a hundreds of years grudge with America in A Matter of Life and Death by rendering glorious life an impassioned rainbow and Heaven a dreary, stagey, monochrome bureaucracy ruled over by international wounds rendered foolishly artificial and mockingly wasteful. He explored the Western world’s obsession over superiority and moralism forcing itself onto the rest of the world through neocolonialism in Black Narcissus by rendering the elitist morality of Western nuns to control the non-Western world a self-destructive impulse doomed to fail in a landscape-of-the-mind, Tibet, the Westerners never bothered to see as a real place or try to understand in the first place. But the closest film to Peeping Tom is undoubtedly his earlier exploration of the daily dialectic of art as humanity’s savior and humanity’s downfall: The Red Shoes. The film dealt with ballet and was, if psychosexually traumatic, also grand-standingly baroque in its exploration of art.

Peeping Tom is far less kind in its depiction of the relationship between art and human suffering. The film, released the same year as Psycho, takes an even more nihilistic axe to the at-the-time increasingly large and filled-to-bursting heads of the “film director” or auteur, none-too-subtly reflecting on their oppressive, abusive nature far more viscerally and challengingly than even Hitchcock ever did in his famously baleful, self-lacerating late ’50s films. If the visual metaphor of Mark filming his victims’ scream as he gashes them to death with his tripod isn’t garish enough, his day-job working under a director who abusively stages false horror for audiences is sure to do the trick.

And I mean “garish” as a compliment, as the film’s commanding, vigorous non-subtlety in favor of almost-operatic visuals and a soundscape so blood-curdling it could scrape off paint is undoubtedly narrative film at its most challenging and confrontational. This is not a film for the faint of heart, nor is it interested in masking its psychoanalytic Grand Guignol; it does everything but state that directors are the products of troubled personal lives all-but forcing them to turn to a movie camera to produce false and artificial emotions to fill-up a false world they lack in the realities of day-to-day life. Or even worse, to make that false world “real” by acting upon their filmic desires, no longer feigning realism but taking it as Mark does. The end result is a gloriously enrapturing and unnervingly decadent fantasy of monstrous, monomaniacal color, funneling all of Powell’s previous visual skill into the more explicit realm of humanity’s nightmares, or in this case a director’s nightmares.

Within, Powell rather stunningly takes no prisoners in tackling perhaps the ultimate question of the cinema: what it means to ask for “realism” in film. Mark’s effort throughout the film is part of his lifelong quest to produce “real” horror, to take the falsity of film and make it honest in the only way he knows how. As depicted here, we would never in a million years actually want realism – merely the semblance of it, but we lie to ourselves and say we want the real thing without seriously considering the fundamental tension in the idea. The film pursues the logical extent of the claim among directors for “realism” in film and the oppressive lengths they will go to in order to achieve it, reminding what happens when audiences beckon on for realism of emotion and directors find themselves prey to the audience’s gaze.

Meanwhile, if this film does seek some empathy for its main character as a victim of other power-hungry fear-mongers, it is also a rather stunning indictment of the modern male and male obsession, especially as it overlaps with filmic power structures. Psycho emphasizes this as well, but it is less potent, less elemental there than it is here. Hitchcock famously tackled this subject most fulfillingly in Vertigo, but he was perhaps too beset by the studio system, as well as his own implication in using and abusing women in his films for inciting fear, to truly produce something that matches Powell’s melancholic mania. Hitch, although he circles it in Rear Window and many other films, was never this forthright or demanding in his critique of a character who uses the cinema to assert his dominance onto women.

As Roger Ebert notes, Martin Scorsese once said that with 8 ½ and Peeping Tom we had all we could ever need to know about directing. If so, Peeping Tom is the scarier, more abusive, soul-deadening negative mirror-image of the more conflicted and often hauntedly-joyous Fellini film. This is a coal-black fable about the dark side of cinema and viewership, the sense of helplessness those in front of the camera feel before an audience who must interpret them and make of them what they will, and how those behind the camera will stop at nothing to win that favor. It is one of the definitive filmic self-critiques, a bile-spewing dissection of the landscape of cinema which strives not for “realism” but a contorted, empty, pathological world it underlines with garish blood-red strokes. Powell was not a horror film director, but oh yes, Powell directed horrors. And this is not only his most personal horror confession but a deeply disturbed manifesto to the power of filmmaking, for good and evil.