Edited because sometimes I can be a lame white critic who doesn’t know as much about Japanese culture as I should.

With 13 Assassins, Takashi Miike, long-renowned for his excessively violent explorations into grisly, highly presentational Jackson Pollock blood splattering by way of horror, approximates growing up. But he isn’t above a little gleeful violence while he’s at it. To this extent, he absolutely has his cake and devours it too, combining two filmmaking styles into one, sometimes uneasily, but knowingly so: the stately, moody, quiet feeling of mid-century Japanese samurai-Shakespeare and the modern stylistic kitsch of kinetic energy-above-logic action pictures. That we will not expect the two together, Miike bets his top dollar. In fact, he intentionally distances the two styles, all-but formally announcing the film as a work of two parts, one subdued and one that hits with the force of a tornado. It’s an exercise in formal style and genre more than it is a narrative, but when a film is this well made sometimes a pesky narrative getting in the way is just one more obstacle to be avoided. END_OF_DOCUMENT_TOKEN_TO_BE_REPLACED

* This post will cover Jee-Woon’s three most recent films, being that they are the ones I have seen as well as the ones which fit most nicely into my admittedly arbitrary cut-off date for reviews of “newish” films posted without some sort of larger organizing theme.

The Good, the Bad, the Weird 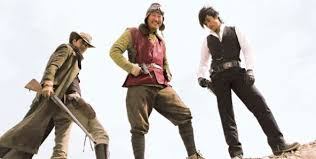 And here is where we go off the rails, and right from the beginning no less. Kim Jee-woon has always been messier than his fellow South Korean mad scientists Bong Joon-ho and Chan Wook-park, a point he makes no bones about hiding. His films are also messy with less of a pinpoint purpose and to much less subversive results – if Joon-ho and Wook-park are madman auteurs, Jee-Woon is a mad craftsman. If the former is a bit more satisfying in the end, both are lacking in today’s world (perhaps the latter even more than the former), and they’re both entirely welcome. END_OF_DOCUMENT_TOKEN_TO_BE_REPLACED

Kiss Me Deadly, released in 1955, is one of the last great classic period film noirs, but it wasn’t often acknowledged as such originally. It was fought by politicians and “moral” figures at the time of its release, seen as the kind of film dangerous teenage types went to see in hopes of engendering social subversion. And this concern, about the danger it posed to accepted, conservative social mores, was valid: not only is this a lurid and exploitative film, but it has the gall to elevate these qualities to high art and use them to reflect on the luridness and exploitation perhaps intrinsic to human nature. END_OF_DOCUMENT_TOKEN_TO_BE_REPLACED

Unforgiven is about as gutsy and ravaged a film as you’ll find from a mainstream American director, a work which not only deconstructs a genre of film but the filmmaker’s entire career. It’s seeped in merciless violence, but as much a violence which occurred decades before the film begins as any violence which occurs from first reel to denouement. It rolls over the arid hills of the American West, bathed in a dark, ominous red of the blood done in the past but which refuses to be forgotten. With Unforgiven, Eastwood not only tears down the violent core of America’s past, but he has a few choice words for the gaze we place upon violence in modern society. We’re fascinated with it. And Eastwood, a man whose career was built on celluloid violence, knows this well. He runs us through the wringer with quiet, elegiac visual poetry which provides us with a dreamy, mythic Western landscape and that turns out to be a nightmare clinging us to our past. This is cinema of implication, with Eastwood questioning whether we can ever break from the horror-show of the Western genre and underlining his question in blood-red strokes. END_OF_DOCUMENT_TOKEN_TO_BE_REPLACED

Australia’s great lost film, Wake in Fright, is a movie of untold wonders that might have been better left untold. Released in 1971, the film is mesmerizing but was nearly lost to the muck from whence it came, fitting considering its bleak, cynical worldview of perpetual loss and emptiness. It’s easy to see why it failed to find DVD or VHS distribution until the 2010s, nearly forty years after its release – this is about as far from a “feel-good” mainstream film as you’ll find. It’s not an easy film to sit through, the kind that not only depicts horrors of all variety but dares us to keep watching and then scares us for our own complicity in the activities it depicts. Wake in Fright marries realism to the land of nightmares as it gives us a vision of modern maleness and male-run civilization as a bandage stretched thin over past wounds still left to fester elsewhere in the world, forgotten by others. It’s a necessary film, an important social statement, but most people would probably rather not have to hear it. Wake in Fright is the purest form of lonely oblivion, an eternally mangled wail into the darkness of blinding light. It is cinematic ungodliness. END_OF_DOCUMENT_TOKEN_TO_BE_REPLACED