Martin Scorsese’s lived-in film adaptation of The Band’s legendary, star-studded farewell concert, cheekily titled “The Last Waltz”, is wholly at odds with the fundamental logic of the conventional concert film, and it is all the more fascinating for it. At the eve of their dissolution, Scorsese chose to film the Band warts and all.  He captures, more than anything, their own distance from the music they no longer necessarily want to call home. You can feel his love for the energy of raw music, yet he uses this energy to capture a fundamental malaise. His camera becomes their most knowing fan, giving the film a live, human physicality even as it deals in the deadened decay of men too tired to care anymore. The Rolling Stones’ documentary Gimme Shelter, itself fairly stunning, is haunting for the way a single tragedy intervened and permeated the celluloid of the whole film. Here, however, we come to understand something more deadening: the perpetual tension of joy and melancholy of life on the road, something a tragedy wouldn’t so much break-up as become one small portion of. On this tension between the lively and the embalmed, the film presents a fascinating vision of humanity and performance equaled by few films. END_OF_DOCUMENT_TOKEN_TO_BE_REPLACED 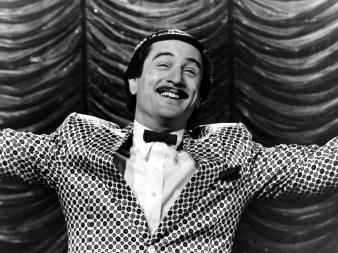 The King of Comedy is famously Martin Scorsese’s misunderstood picture, the one that had the great misfortune of being a follow-up to a film that did nothing more significant than simply be the best work of the 1980s while capturing like no other film the spirit of the 1970s all in one fell swoop. In other words: a follow-up to Raging Bull. No big deal. And if that wasn’t enough, if for no other reason than to fulfill his masochistic desire to invite negative comparisons to his other films, Scorsese went and made The King of Comedy with that previous genre defining film’s star too. Audiences didn’t take to the film, although it has recently been re-evaluated by critics, if not the movie-going public. Perhaps audiences were right to shun it – it’s creepy, unnerving, and it directly mocks the entire entertainment-audience relationship. In its own way, it’s as nihilist as any film the director ever made. Only, unlike his crime films (although this, truly, is a crime film if ever there was one), The King of Comedy was marketed as, and masquerades as, a loopy, giddy comedy. It’s a profoundly uncomfortable, unfathomable film. At least superficially, it’s perhaps the director’s lightest production (excepting maybe the recent Hugo), the kind we’re supposed to get into and fall in love with for its quirky amusements and revelatory lunacy. Turns out Scorsese had something else in mind. END_OF_DOCUMENT_TOKEN_TO_BE_REPLACED