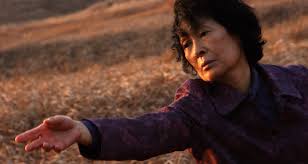 What a gleefully macabre noir masquerading as neo-realist drama this is. From Bong Joon-ho, the director of The Host and the astoundingly underrated Memories of Murder, comes a film that manages to both swaggeringly eviscerate expectations by shifting gears every thirty minutes while also remaining so confident and thoroughly quiet about its gusto that it flows like butter. This film is dark and dreary, with a wonderfully droll sense of humor, and it brings new life to detective conventions by casting a middle-aged mother (Hye-Ja played by Kim Hye-Ja) as a detective with a personal stake in the crime. It’s a true pitch-black pleasure. END_OF_DOCUMENT_TOKEN_TO_BE_REPLACED

Snowpiercer is the last of the big three South Korean directors’ English-language cross-over attempts.  Of course, by “big three”, I don’t mean to say these three, Park Chan-wook, Kim Jee-woon, and Bong Joon-ho, are the three best South Korean directors working today (I couldn’t by definition claim that). But they are undoubtedly the three with the most foreign attention shined their way. Chan-wook and Jee-woon went simple with their English-language endeavors, creating the deliciously naughty psychological horror Stoker and the terrifically-fleshy and well-directed by hum-drum Schwarzenegger vehicle The Last Stand respectively (seriously, it’s a display of the director’s talent that it shines through in a script so unfitting and as positively lame as that film’s). Joon-ho’s film took a bit longer to release and aims a bit higher. But lofty narrative ambitions don’t always benefit a film without a script to back it up (thus The Raid, for its elegant, brutal simplicity, was a much better film than the still-good Raid 2). It’s a good thing then that Joon-ho decided to jettison narrative sense or substance mid-way through the film. As for what he replaced them with? It’s much more depraved, much giddier, and above all, much more wonderfully off-the-wall indeed. It’s a study in contained chaos, and like the best of the South Korean New Wave, madness is never far around the corner.