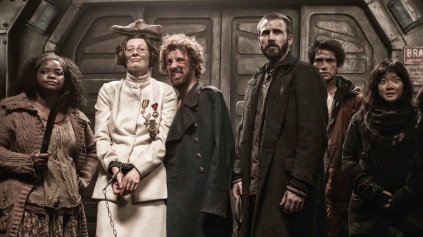 Snowpiercer is the last of the big three South Korean directors’ English-language cross-over attempts.  Of course, by “big three”, I don’t mean to say these three, Park Chan-wook, Kim Jee-woon, and Bong Joon-ho, are the three best South Korean directors working today (I couldn’t by definition claim that). But they are undoubtedly the three with the most foreign attention shined their way. Chan-wook and Jee-woon went simple with their English-language endeavors, creating the deliciously naughty psychological horror Stoker and the terrifically-fleshy and well-directed by hum-drum Schwarzenegger vehicle The Last Stand respectively (seriously, it’s a display of the director’s talent that it shines through in a script so unfitting and as positively lame as that film’s). Joon-ho’s film took a bit longer to release and aims a bit higher. But lofty narrative ambitions don’t always benefit a film without a script to back it up (thus The Raid, for its elegant, brutal simplicity, was a much better film than the still-good Raid 2). It’s a good thing then that Joon-ho decided to jettison narrative sense or substance mid-way through the film. As for what he replaced them with? It’s much more depraved, much giddier, and above all, much more wonderfully off-the-wall indeed. It’s a study in contained chaos, and like the best of the South Korean New Wave, madness is never far around the corner.

So where do we begin? Curtis (Chris Evans, donning beard and low lying beanie to convey that he’s “seen some things, man”) and the younger Edgar (Jamie Bell) and the older Gilliam (John Hurt) are impoverished passengers who make their home on the back of a train. But this isn’t just any train: it’s the Snowpiercer, a train constantly shooting around the Earth and holding all that remains of humanity after a failed global warming experiment froze the Earth 18 years ago. Although most of humanity is long gone, the train manages to create that most human thing with aplomb: class division, with the elites occupying the well-equipped front and the impoverished, grimy back. Then one day Curtis sets his sights on rebellion, as others have done before him. Only he has a better plan than anyone before him.

With all that going on, you’d be excused for thinking Snowpiercer is a serious commentary on class relations. It isn’t. Bong Joon-ho has something else in mind: a balls-out lunatic-fringe thrill ride and a directorial extravaganza that revels in a strange and potentially off-putting middle-ground between class parable and warbled kitsch. Certainly, the film begins as a class parable, a microcosm of society in a train if you will, and it roughly follows this outline throughout, developing sympathy for the plight of the underclass and hatred for the elite– but all the details are filled in with aplomb as dangerous wild man action auteur-ism. This is not a nuanced narrative about class. It’s as blunt as blunt gets, and it’s gloriously anarchic and giddily left-field for the fact that it’s just out to have fun on its own ambitions than aim for anything more textually compelling.

In the middle of this all, the director’s kinetic style centers the film more than anything predicated on narrative. A mid-film smorgesboard of violence erupts out of nowhere and melds BDSM medieval warriors, night-vision horror, and a literally fiery light-and-dark interplay and cathartic violence that binds visual poetry to neo-realism. Later on, a scene in a bath-house is composed yet chaotic and wonderfully suspenseful. Meanwhile, Joon-ho’s camerawork and set design creates an un-easy world that  marries realism to surreal non-sense. Sure, the shots of outside frost are too clean and inviting – like something out of a commercial or a music video – but they’re a small part of a film that concentrates on practical effects.

Best of all though is Joon-ho’s gallows humour, admittedly unsurprising when considering his penchant for finding laughs in dark places in his previous films. Most notably, Tilda Swinton’s connivingly villainous antagonist is a wonderfully over-the-top pastiche of Margaret Thatcher-style creepy, affected charm, and shallow self-legitimacy, overbite and all. The portrayal is out of a cartoon, not a serious film confronting politics, but it’s wonderfully affecting and the film is so committed to its aesthetic it’s easy enough to accept and follow along. Elsewhere, the later portion of the film has the lower-class characters move through the upper-class carts, including a garden, a pool, a sushi bar, a rave, and an aquarium, looking on in disbelief and dry anger all the while. Best of all if a mid-film venture to a train car housing an elementary school, a scene straight out of Sam Raimi’s particular style of disconcerting comedy. It’s wonderfully droll, as the kids revel in indoctrination and uncanny joy while wearing masks straight out of The Wicker Man, before things erupt in a pinpoint fury of violence.

Joon-ho’s gonzo, unfazed craftsmanship extends until the end. Let no one say he doesn’t have the courage of his convictions. The film throws in twists and turns toward the conclusion that register to different extents, but its nihilist end-game ultimately wins over on the force of its commitment. I have not seen a piece of pop entertainment with an ending this anarchic since Cabin in the Woods, except while that film continually felt the need to point out its cleverness via self-conscious dialogue, this one simply goes for broke and brings you along for the ride. Even the last-minute Big Emotional Scene, which shouldn’t work at all, gets carried along on the sheer force of Joon-ho’s endearing kitchen-sink-included filmic invention (even if it, rather unfortunately, is completely indefensible and even morally reprehensible as nihilist “all humans are savages and any political action will only make things worse” politics go).

The film’s ending scene has young Yona and Timmy donning winter coats and staring enigmatically at a polar bear outside the train. The implications are multitudinous: life exists outside the train, the world may be warming, the two, if they survive, may repopulate the world with time, and as the children of the primary minority characters in the film they may create a fundamentally mixed-race world absent any of the class or race divisions the film vaguely explores, or they may just die. Like most of the film, it doesn’t make a lick of sense, but it’s effective, affecting, and in its own rock ‘n’ roll way, loonily auteur-like. This film has a vision – a zany, borderline incoherent one – but it’s that vision which hurtles the film forward with the kinetic nonstop momentum of its titular vehicle. We may pause occasionally to look rather bemused, but it’s all too thrillingly kinetic and endearingly off-kilter for it to last. It rattles us into submission, trucking along like a dementedly episodic pinball machine Cinema of Attractions piece in the guise of a political thriller. This is a film genuinely in love with its own existence and having a blast while doing it.  Director Bong Joon-ho has gone English-language, but he’s also managed to create maybe the first successful live-action anime-style production yet. It’s silly, but it’s proud of it, warts and all.