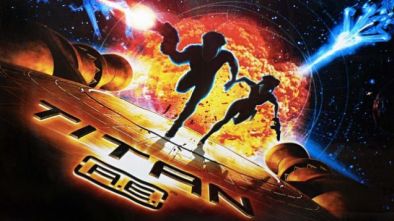 Years later, even if it isn’t always effective filmmaking, it is plainly apparent that Don Bluth’s second film with Fox Animation was never given its due process. Hired to best Disney at their own game with 1997’s Anastasia, Bluth had a one-film hot streak under his belt when he fearlessly jumped into the animation deep end with its follow-up, 2000’s Titan AE. His arrival at that point, the world now on his shoulders, was a two-decade-long torrid affair with the powers that be. After originally rising through Disney’s ranks in the ‘70s, when the company was in a downhill slide, he absconded in the ‘80s in belief that he could outdo them. His dream of besting his once-master was briefly given feral life, but Disney’s ‘90s renaissance was too much for him to handle, ultimately resulting in screwing himself over in the early ‘90s in a desperate craze to keep up with his former masters resulting in failure after failure. His career was over, until Fox Animation ceremoniously afforded him one more shot to best his former bosses (admittedly, he was the only one in history that had accomplished this goal before, so one can see why he was the natural candidate). Anastasia triumphed commercially just as Disney was beginning to falter itself, and the stage was set for Bluth to return to investigating the crevices of animation rather than simply aping his former masters as he did with Anastasia.

In this case, though, playing it safe and steady with Anastasia was a recipe for success. As for Titan AE, an uncouth, rebellious excavation of uncommon animation realms? Unheard-of box office failure, and an instant censoring of Bluth’s renewed animation career, sedating and killing it amidst the dead-heat of a rampage after it lost its footing and toppled over on the back of its sheer ambition. Bluth’s vision was a space-faring adventure that mixed-and-matched not only styles but analog and digital realms in adventurous ways. However, with the 3D computer animation field less than adept (at the time) at marrying to cel-styled, flat, traditional animation, the prudence of Bluth’s imagination was not a corollary to its fascination.

The story isn’t a slugabed, at least. It’s not exactly mirthful, but there’s a spidery ricocheting moxie to the film’s piratical story that exhibits a willingness, even a conviction, on Bluth’s part to flex his animation muscles in the direction of mid-century pulp fiction. After a hasty escape from an imploding planet Earth, the film flash-forwards fifteen years to young Cale (Matt Damon), one of the escapees, who is absolved of his daily doldrums by a space captain Joseph Korso (Bill Pullman) and his navigator Akima (Drew Barrymore). As these things tend to go, they entrust Cale with saving the galaxy and creating a new Earth to unite the now fractured, homeless, space-faring human race. Apparently, his now-deceased father inscribed the remnants of the map to locate the Titan Project, a nebulous human-saving something or other, into Cale’s body. Destiny and all that prevails.

Which is superficially one of those noble, gorgeous dry-bone stories that is too willing to pontificate and suffuse its primal essence in a space haze of philosophy, thankfully something that Bluth’s more classical film proves not to be. Within its heart lies a less cosmically-minded, more low-to-the-ground space adventure in the Star Wars mold with an eye for invention and an ear for endearing recklessness. Which is for the best; the script, by Ben Edlund, John McCormick, and Joss Whedon (yes him, fresh off of the disastrous likes of Alien Resurrection) is faintly anonymous and often disastrous when it dalliances with character depth. Better to leave them anonymous blocks and static types personified by the animation rather than drift off into the rogue realm of breathing actual character life and portent into people who really don’t deserve it.

Unfortunately, from there, the film frequently nosedives into near-fatal realms, both from its ambition and its lack-thereof. Failures abound, from the milquetoast, whitebread vocal performances for all of its human characters (Damon, Pullman, and Barrymore are exerting about as little effort as humanly possible), to the nadir-humping impossibility of the anachronistic score of early ‘00s butt rock, all sub-nu metal and vague Limp Bizkit knock-offs, in space no less!. The real struggles, however, are in the animation realm, where the film dives into a swirling cognitive dissonance of irreconcilable self-sabotage as that which ultimately saves the film also ignites a fire it can’t escape from.

On one hand, Bluth’s heir-to-Disney’s-throne cel-styled animation is often divine, all spindled movement and characterization through sheer visuality (Korso’s non-human crew, kangaroo-esque Stith (Janeane Garofalo), space turtle Grune (John Leguizamo), and supercilious sidekick Preed (Nathan Lane) are the highlights of the film on all fronts, from animation to voice acting to characterization). The broadness of Bluth’s fluxional style, more comfortable in non-realistic realms, is at home in these characters. But the humans are a grimier, depressing lot aiming for a realism that only thaws the characters out of their expressiveness. The main characters are reduced to nominally more subtle facial expressions that are not abetted at all by a script without an ounce of material to fill-in those expressions with actual meaning and life. The anthropomorphized characters, clearly Bluth’s collective muse, shuttle past the script’s deficiencies on a rocket of sheer cartoon physicality that the human characters – relying on a non-listening script for maturity and depth – completely avoid.

The human nomads, though, aren’t the film’s real poisoned apple here. No, that would be the film’s endearing but chilly and misguided attempt to rocket past technology and place 2D characters on 3D CG planes, the fruits of which are a junkyard dog of a film that is constantly buckling underneath the slurry of visual styles. Rather than fascinating counterpoints, the dimensions become heated adversaries, with the flat characters floating roughly in tandem with 3D technology surfaces that never connect with the people nominally standing on them. The villainous Drej, computerized space aliens, work because they are meant to be invasive forces in the film, so their ungainly, non-normative depiction is justified in the screenplay. But the rest of it? A film searching for a style, throttling between multiple ones, and ultimately forgetting to rise up from the briny depths of its animation to come up for air.