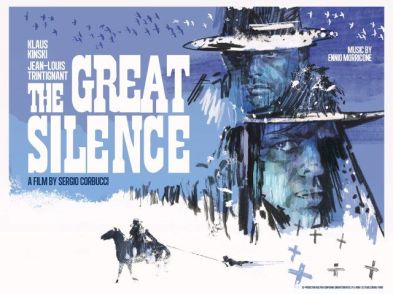 In honor of the half-century anniversary of the epochal years of 1968 and 1969, I meant to propose a little series of reviews commemorating the films of those years last summer, particularly with all the academic conferences and articles trying to rekindle the lost spirit of ’68 or otherwise to dissect it. I didn’t get around to it at the time, but with the era lulled to sleep last month by Quentin Tarantino’s phenomenal Once Upon a time in Hollywood, now seems as good a time as any to start! I apologize that I’m a year late to officially celebrate the 50th of some of these films, but a great film doesn’t need a deadline to be remembered.

For American audiences, perhaps the paradigmatic revisionist Western is Robert Altman’s McCabe and Ms. Miller, a mournful and melancholy elegy with which Sergio Corbucci’s The Great Silence shares its cruel disposition toward and critique of the state-sanctioned monopoly capitalism at the heart of American myths of bootstrap individualism. Both implode the notion of the wandering soul thriving on and conquering the landscape in service of personal achievement. McCabe is arguably the great American Western, a murky moral tapestry of uncertain desires and unfixed figures barely convincing themselves that their tenuous relationships constitute a frontier “town”. Compared to McCabe, most so-called “revisionist” Westerns seem like trivial twists on conservative formulas passing themselves off as revolutionary signposts of a new cinematic future.

But if McCabe is a weary lament, The Great Silence, one of the great forgotten Westerns, is a sorrowful and brutal dirge. To my mind, it is the only Western from the era which can truly huddle up under McCabe’s fire, particularly because it’s the only one which knows how frail, fragile, and dubious any fire of hope in the old West truly is. The Great Silence is a morose, poetically wayward counterpoint to that other Sergio’s more famous, more flamboyant Italiannette abstraction of the American experience. Like McCabe, it both takes seriously the wayward lives of the nomadically unsettled – and the kinds of new conscious born on the frontier – while questioning – and in Corbucci’s polemical case, absolutely desecrating –the American outlaw mythology where lone heroes brandish a form of individually-legitimated personal justice that stands apart from and above the state. The Great Silence’s protagonist opposes state-sanctioned violence, but there is no sense that is above or beyond it morally so much as circumstantially on the other side of it.

Both films begin the same way though: an opening credits sequence where a forlorn, near-silent hero trudges through an inhospitable limbo of snow and a tangle of forestry en route to a necessarily temporary destination. In both films, the camera seems to never grant safe access to the ostensible hero. Both figures seem destined for elimination, not only from the way the narrative fatalistically crawls toward desperate conclusions but the fact that both figures constantly seem like they could evaporate into the snow itself. They travel phantom-like through a world that both birthed them – and which they embody – but which can’t ever give them home and must excise them entirely as lone-wolf capitalization gives way to corporate capitalism. (One of the interesting features of American mythology is that both serve as the others’ less respectable shadowy mirror-image depending on the situation, but they often travel in tandem).

In Altman’s film, McCabe’s infamous muttering subverts the “strong silent” dignity of the Western hero who need not speak his way out of a problem or share his opinion – need not participate in the social bartering and negotiation that defines democracy – because he already “knows” the ways of righteousness. Rather than his silence as a testament to a prefigured status as totemic icon to goodness, McCabe mumbles and stumbles his way through the film because, as we soon learn, he really doesn’t know what he’s talking about. But The Great Silence’s protagonist, Silenzio (Jean-Louis Trintignant), is more vulnerable still, his muteness emblematic not of his personal assurance but of the trauma he carries with him in his past.

The tragedy was perpetrated by current corrupt banker Pollicut (Luigi Pistilli), who killed both Silenzio’s parents and disfigured young Silenzio so he couldn’t tell the tale years ago. Now in winter of 1899, and on the eve of a famously torrid blizzard, Pollicut has hired government-sanctioned bounty hunter Loco (Klaus Kinski, deliciously supercilious) and tasked him with murdering outlaws and Western explorers to pave the way for a more respectable West. Which is to say, one with nuclear family values underwritten by monopolistic interests and state control. Drawing us emphatically to the entanglement of capitalist oppression, imperial conquest of the West, and the mythic personas that launder both as hospitable fiction, The Great Silence is perhaps the most explicitly radical Western of the era. The depiction of the mountain-living family of “outlaws” Loco is sent to kill suggests that they must be terminated less because of any violence than because of their seemingly undomesticated communal living arrangement, one that deliberately rejects the pull of civility and its enforced paternalism and is perceived as a threat to the social order.

Corbucci famously made The Great Silence with the murders of Malcolm X and Che Guevara on the mind, and the film laments the passing of a particularly hopeful era of potentially radical outsiders (the ‘60s) while also figuratively calling attention to that era’s predecessors and priors, the utopian dreams discarded across the landscape of American history. The film ultimately suggests that while the 1960s may have stewed a particularly spirited revolutionary impulse in the US, the ebb and flow of radicalism, and the material interests of the powers that be to repress, is a tale as old as time, one which we are perhaps doomed to replay ad infinitum.

The Great Silence certainly doesn’t offer any comfort, in that regard, nor any moral centers. The nominal sheriff is a hapless, self-styled respectable type and nothing more. And Silenzio, for his part, kills indiscriminately, provided, of course, he tempts his opponent into drawing their gun first so that he can claim self-defense. Totally obliterating any supposition that the hero would only act when he genuinely needs to, the film instead proposes that Silenzio is as willing as any to manipulate the contours of the law for his own devices. And there’s no moral elevation on his side; we’re made to understand that, while Silenzio is vehemently against the bankers of the world, there’s no sense that he has any moral convictions that might lead him to inaugurate a new world either.

What Corbuccio does offer, instead, is a pugnacious, fringe-dwelling, downright nasty interplay of visual, aural, and psychological textures, from the desolate, totally forbidding purgatory of senseless violence that is Snow Hill, Utah (and America) to the vaguely loopy logic by which the story unfolds as a tragicomic series of mounting bodies dragged upward and glimpsed through windows, abandoned severed arms pulled up out of snow, and lost souls nearly forgetting how horrid the world around them can be before the body count rises again to remind them. (Not to mention the film dabbling in the quasi-comic absurdity of occasional exorbitance, as in a positively gluttonous sequence of a man eating which had to have influenced Antonia Bird’s Ravenous. Or, for another fascinating quirk, try Silenzio’s very outre, and minorly Freudian habit of shooting off the thumbs of those he doesn’t kill so they can’t wield a gun against him, inflicting the punishment not of death but the inability to wield a consummately phallic technological extension against him.)

The Great Silence also prefigures Altman’s later emphasis on shooting scenes through and from windows and doorways, drawing us to the act of perception, and thus the mediation of perspectives (both ours and the characters), and of generally rescinding any stable or definitive point of view). This somewhat inverts The Searchers’ famous positioning of the moral hero in a doorway, figuratively between two discreet worlds, one of which he doesn’t have access to even as we, the audience, understand a relatively clear and unambiguous separation between both that we have access to. Such theatrical perfection is unsustainable in Corbucci’s vision, a far more feral world and one not beholden to classical divisions and architectural separations. After all, in Ford’s vision, John Wayne’s external wanderer must violently sacrifice himself in the name of an otherwise peaceful transition to what is assumed to be a domesticated, civilized world of private homes. Corbucci’s vision understands this civilizing process as one which violently decimates other ways of life, such as the outlaw family, victims of the government’s violent enforcement of internal-external divisions which Ford proposes are merely part of a natural civilizing process.

Oftentimes, the revisionary West is simply an expansion of a prior given; it incorporates previously excluded figures (racial minorities, women, etc) into a dominant style that had previously denied their admittance. Corbucci’s cinema rejects this assumption. It doesn’t see the past as a resolvable form of social expulsion which it, in turn, “revises”, but instead as a more fundamental form of social dispossession, one which cannot be ameliorated through representational counter-narrative. Thus, the film is skeptical that its own radical inclusion of an African-American woman, Pauline (Vonetta McGee), as Silenzio’s love interest and an agent of her own, is, in fact, a form of radicalism in reality. Rather than lionizing itself for this inclusion, it asks that any claims to “empower” marginalized figures on screen by “granting” them agency should be met with more than a modicum of skepticism in a world that is emphatically inhospitable to claims of “agency” that remain un-coopted by liberal rationalist thought-forms.

Corbucci isn’t interested in black women pulling themselves up by their bootstraps, in other words. Alternately, the film muses, with a pessimism that denounces social exclusion more fundamentally, America may be so inextricably oppressive and inhospitable to human compassion that it might as well be burnt to the ground. The severity of Corbucci’s violence is a kind of provocation, a wish for a world otherwise, but The Great Silence is Western cinema at its most hopeless.