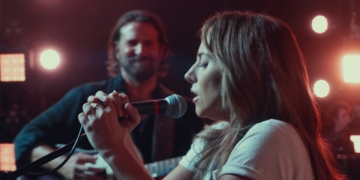 The protagonists of the 2018 version of the oft-adapted A Star is Born may be the rugged, ragged country singer Jackson Maine (Bradley Cooper) and the younger rising pop star Ally (Lady Gaga). But the film’s voice undeniably belongs to another character, Jackson’s older half-brother, played with a typically phenomenal mixture of world-weary cynicism and weathered wit by Sam Elliot. Essentially the film’s viewpoint, Elliot’s character rebukes criticisms about its remake status by explicitly and perhaps charitably thematizing the value of playing within formulas and dusting off older routines in an early line of dialogue. As if the film is commenting on itself, this traveling soul seems to know, more than his younger brother who still believes in a more singular notion of originality, that there are limits to self-fashioning, and that all selves are cobbled together piecemeal out of influences far and wide. Elliot’s itinerant would-be cowboy reiterates what prior American wanderers Whitman and Emerson understood as the tragic possibility of realizing that you live in a world where all you can truly do is quote creatively.

Elliot’s character thus not only provides Cooper his voice but gifts his movie its thesis, not to mention its point of view. And, of course, its mildly self-congratulatory excuse as well, the film’s way of avoiding the challenge of more overt experimentation while committing to the belief that all experimentation is itself a similar form of play within existing structures. Of course, the film is correct in suggesting that creativity really is just skillful reconsideration of forebears. But that doesn’t necessarily let the film off the hook for, well, not doing much in the way of genuine reconsideration.

Elliot’s voice is the film’s in a second sense as well: Cooper’s protagonist sounds like Sam Elliot looks, and the gravelly hoarseness of both performances is also part of its relative fascination, as well as its thematic commentary. Another line of dialogue seems to acknowledge that Cooper’s character chose to model his voice off of Elliot to achieve some simulacrum of “authenticity,” suggesting that Maine’s swaggering machismo is a performance, a kind of costume meant to articulate an American creed. The film suggests that no one is really born a rambling man; through a combination of social circumstance and personal will, they become one, even at the expense of other, perhaps more humane and generous, versions of self.

As far as it goes, the film’s self-commentary is both a source of welcome internal reflection and, at times, a wearying and perhaps too obvious attempt to insulate itself from criticism. The film doesn’t really need to acknowledge that it “knows” it’s unoriginal, especially because it generally earns its unoriginality the old-fashioned, non-metatextual way; by simply working as a story, one which enacts and embodies the creative manipulation of self it clearly wishes to thematize. The line from Elliot that “explains” to us is poetically luminous in his voice, but as written, it’s also too cute by half, literalizing the film’s status as a remake and preemptively fending off criticism. Self-awareness does not excuse lapses into triviality or melodrama.

For this reason, the film tends to work best when it isn’t stressing notions of authenticity and originality that are transcendently singular so much as ones which are Emersonian, preferring not the autonomy of unmediated, “pure” newness but the necessity of quoting and interpretive play, the value of scribbling in the margins of previous sources and drawing from resources dating back through cinematic time. We’re still watching a fairly schematic rise-fall story, but there are impressive wrinkles. Compared to the earlier adaptations, especially the abysmal ‘70s take on the material, Cooper’s version is decidedly more critical of the aged, weathered figure’s paternalistic appreciation of the younger insouciant, all without diminishing their genuine affection for each other. Nor dismissing the frankly astonishing chemistry Cooper and Gaga have together. (The latter chemistry, in fact, tends to harm the film when the characters are away from the other). Likewise, the screenplay throughout intimates a few more self-reflective realities about Jackson’s obviously constructed star persona, suggesting a mixture of fable-like yearning (the characters’ fantasies, desires, and dreams) and hoarse, whiskey-soaked realism.

A little bit, in other words, like Cooper’s work with the two self-effacing auteurs, Clint Eastwood and David O. Russell, who have guided his dramatic career, thus far. At times, A Star is Born feels too conspicuously like what those two directors, both influenced by strains of classical Hollywood cinema (the pragmatic romanticism of Frank Capra for O. Russell and the clipped, ascetic anti-visionary pragmatism of Anthony Mann for Eastwood), would create if they worked together on a film. But A Star is Born does play the textures off of one another, suggesting their frictions while not losing sight of their search for common ground. (By which I mean that the film searches for common ground between the two styles and that it embodies the spirit of the classical Hollywood romance, a tradition both directors are well-schooled in, and one which Stanley Cavell so famously reminds us was all about the search for common ground: emphasizing  the way in which romantic partners establish difference while also working toward unity in an interpersonal democratic tension that, for Cavell, modeled a kind of romantic vision of the American polity).

None of this makes A Star is Born a coup de cinema, but the film is skillful and quietly stylistically creative in its own way, more so than one might expect from a director with no experience behind the camera. Even the film’s most obvious stylistic feature – it’s nearly domineering emphasis on close-ups – isn’t as obviously a failure of vision as in other films where actors step behind the camera only to find themselves generally disinterested in mobilizing the camera as a genuine perspective on the action so much as a neutral window onto actors who inevitably carry the burden of thematizing the drama. Cooper’s general focus on close-ups certainly seems to suggest the camera as a neutral window initially. But what initially looks like Cooper the director’s inability to do anything but fawn over his own rugged visage and his costar’s beautiful countenance eventually suggests Jackson’s own egotism, the character’s inability to move beyond their two faces, the camera closing out a world he has already blinkered off.

Which is to say: rather than exposing the actor’s egotism, it reveals a canny director’s awareness of his character’s self-centeredness. Rather than the director’s failure to consider the outside world, it reveals his character’s hesitance to do the same. Cooper’s all too obviously actor-hewn favoritism for faces over cinematic geography and cartography becomes a way of suggesting perspective, rather than a lapse of perspective. That’s probably the most interesting aspect of Cooper’s film, that and cinematographer Matthew Libatique’s occasionally creative play with neon-tinged, nearly non-representational color flares. As for the rest, from the hang-dog tropes to the fairly-indifferent songs (except the great “Maybe It’s Time,” despite how obviously it’s written by Jason Isbell), well they don’t help matters much. It’s perhaps the cruel irony of the film that it both oversells and underserves itself when it comes to its perceived “originality”. Despite its assumptions to the contrary, this A Star is Born isn’t actually just the same old song and dance. But, in order to legitimize these quiet but provocative interventions in form and content, it can’t but launder them in an overdose of rock ‘n’ roll (and country) classicism, as though in order to creatively play with its dusted-off old school threads, it must also bask in their authoritarian comfort and do so unquestioningly.