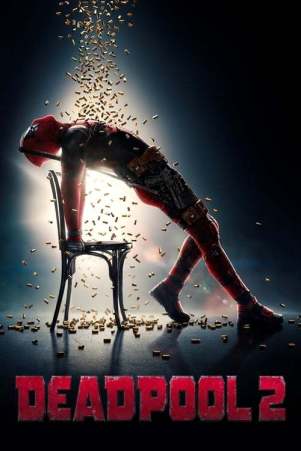 Quite like Avengers: Infinity War, Deadpool 2 traffics in inside-baseball references rather than genuine emotion. It simply treats the insider knowledge required to fully appreciate it as an indication of its impish wit rather than solemn, magisterial weight, but both are essentially, cynically, committed to walling themselves off from criticism with the defense that their critics just “don’t get it”. For Avengers, it’s that you aren’t sufficiently committed to the franchise to “get” its “developments on” (read: regurgitations of) earlier films in its cinematic universe. For Deadpool 2, it’s that you don’t “get” how self-parodic Deadpool 2 is; like any good ironic film, it treats every moment both as sincere narrative event and parody of the same, ensuring that no can capably attack it for fear of being accused of just missing the point.

That’s lame, as it always has been. The least that can be said in Deadpool 2’s favor, however, is that while it is no less self-absorbed than Infinity War, or any MCU film for that matter, it is also very self-amused. Its personal rubric for success is its dialectic of self-appreciation and self-flagellation (quite a fitting duality for the sado-masochistic title character). Of course, its amusement is limited to fairly obvious satire. I’ve heard it compared to the works of Paul Verhoeven (and the film clearly relishes these comparisons as superlatives) but Deadpool’s simultaneously comic and solemn fracas fails the Verhoeven poker-face test whereby the blankness of the expression (Verhoeven’s refusal to admit his satire explicitly) refracts many potential tonal and narrative realities based on the audience’s inclination. In comparison, Deadpool 2 is quite clear that it aspires to be both a serious superhero film and a satire of one, a Janus-face rather than Verhoeven’s delicious death-mask that obfuscates emotions rather than inviting them.

Again, lame, as it always is. But plenty of it does work, if on a more limited scale, especially when the film is freely-roving, wandering around with an associative logic that kindles the tiniest iota of what the surrealist’s used to call derive – errantly traversing spaces with no inhibitions, experimentally viewing the world around you rather than moving from or toward places with aspirations toward linear development and/or eventual conclusion. Sure, Deadpool could never truly catalyze the kind of sublime ephemerality and constantly-mutating consciousness of surrealism in its purest form back in its heyday, but the thought counts. Deadpool 2 is an amusingly scatterbrained affair, vacillating wildly between saccharine sincerity and ill-tempered mischief. It peaks (very) early in a Dolly Parton-assisted sequence which reimagines the title character as the hardest working stiff this side of Osaka, Sicily, and Biloxi. That, and then the title credits, a spot-on take-down of the perverse sexism and gun-fetishism still evident in James Bond (circa 1960 or 2018), already elevate this sequel above the first film in my book.

From there, it’s downhill, although not always the hills you might imagine. Most surprising about Deadpool 2 may be its frequently disarming sincerity, its refusal to completely cave-itself in underneath the rubble of irony. When his wife Vanessa (Morena Baccarin) is killed, Deadpool (aka Wade Wilson, played by Ryan Reynolds) doubles-down on work commitments and joins the X-Men, brand-synergy refigured as a kind of personal therapy. Accompanied by chaperone Colossus (Stefan Kapicic) and his protégé Negasonic Teenage Warhead (Brianna Hildebrand) Deadpool then takes on his first mission: trying to save young, frustrated mutant Russell (Julian Dennison) from a mutant “conversion camp,” a narrative crux which clearly updates the X-Men’s (self-acknowledged) tired metaphor for racism in the ‘60s to its mid ‘90s incarnation as a metaphor for LGBT rights. That would be easy enough, if only time-jumping mercenary Cable (Josh Brolin) wasn’t out to kill Russell before he metastasizes into one of the most murderous mutants in history.

Along the way, we meet many more characters as Deadpool 2 mocks superhero cinema’s self-imposed need to keep up with the proverbial Joneses as Deadpool throws in every C-grade hero one can imagine to form the gender-neutral X-Force. The latter joke pays dividends in a truly morbid sequence that also tellingly mocks Deadpool himself for thinking he can reconcile his cheerfully indiscriminate ethos with the pat-liberal, faux-inclusive demands of blockbuster cinema. The idea that a superhero film from a multi-billion dollar corporation can do anything more than pay lip-service to diversity is savagely dismantled here.

Other jokes are less hemmed-in by the demands of superhero cinema – which is to say, less convinced that they need any reference point at all in the Marvel Universe at all – and in these moments, Deadpool 2 genuinely uncouples itself from reference and gives into its latent absurdism. At its best, Deadpool 2 has the sheer freefall magnetism of a screwball routine, the welcome sensation of the frictive push-pull between a story and its structurally unsound reality giving out from under us as the hero dares us to reconcile that internal competition. The fairly obvious and welcome inspiration for Reynolds’ Deadpool (Reynolds is a thousand times less forced than in the previous film) is Bugs Bunny, and the protagonist certainly has that “ain’t I a stinker” devilishness. Plus, director David Leitch, although certainly no Chuck Jones, cultivates a more acerbic, playful visual dexterousness than the prior film’s Tim Miller ever could. He uses the frame space both as a commentator on the action and a genuine perspective rather than simply a canvas for killing.

The film suffers, ultimately, from its desire to be both a moral vacuum and an underdog with a heart of gold, and the whiplash between drama and comedy is violently unsettling at times, and mostly banalizing at others. The whole film is kind of like that, torn between (or thriving on the friction between, if you’re generous) sincere narrative momentum and clear and irrevocable attempts to derail those very advances at every turn. The manna which drives Deadpool 2 is odd, and often self-contradictory, the film sidewinding into deeply unafraid melodrama as often as it is willing to demean and dismantle its very attempts at sobriety. On balance, I don’t know that the film’s self-awareness about the excessive melodrama necessarily validates the air the melodrama takes up. It ultimately traps the film in a self-hating feedback loop in the superhero machine rather than acknowledging its much sweeter heart beneath all the arsenic. Still, as long as Deadpool is Looney Tunes to Marvel’s Disney, the franchise will continue to raise enough of a ruckus, setting up enough pitchforks below the asses of the bigger competitor franchises, to entertain, if never to spellbind.