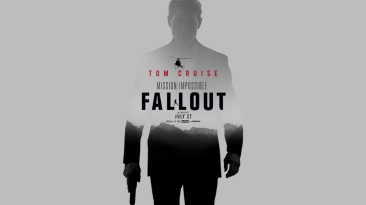 If the “set-piece” as a concept ultimately drives the latest in the surprisingly durable and, more surprisingly, quite malleable Mission Impossible genre, Mission Impossible: Fallout unfortunately is not quite as dexterous with its operatic set-pieces as its predecessor Rogue Nation, entry five in the franchise, nor as deliciously droll in its elastic, Looney Tunes momentum as Ghost Protocol, number four and two films before this new 2018 offering. That fourth film in the franchise legitimized the whole affair after fifteen years of mucking about in Cruise’s dimming star power and alternately playing sub-Bond and super-XXX, much as I do admire Brian De Palma’s truly egomaniacal, knotty inversions of Cold War memory lane in the franchise originator. If Brad Bird’s entry was a course-correct, allowing the franchise to finally stand tall only by turning its legs to string, asking it to wobble around in a spontaneous, comic fracas, the fifth entry, the first from Fallout director Christopher McQuarrie, gilded it in a peculiar mixture of avant-garde classicism. Each set-piece recalibrates the film, ricocheting it around to many alternate registers while simultaneously assimilating ballet, underwater dance, and pop-art alike into its combustible cocktail.

For the most part, Fallout doesn’t really play as well as those films. Instead, it replaces the many fascinating little veins of a franchise discovering itself anew, trying on alternate costumes by the episode, with one giant muscle, pressurized and impelled toward satisfying and satiating our Pavlovian lust for watching a sufficiently self-conscious star manage to punish himself while lionizing his own ego. The earlier films roused unique personalities. Comparatively, this new one awakens mostly its own excessiveness, its undying quest to reach the top of the blockbuster mountain at any cost, constantly evoking a sense of supreme instability in its action, like any character could fall to their doom at a moment’s notice. At the same time, unlike, say, Mad Max: Fury Road with its carnivalesque mania, this new film never shifts emotional registers or welcomes any tonal precarity; while the characters might fall, we’re always quite confident that the film will just keep rising until it reaches its own predefined apex.

And, frankly, its attempts to incline otherwise are only ever distractions. Particularly curious is the film’s routine reminders of Hunt’s faux-precariously positioned morality, far less successfully explored than his physical precarity. Fallout’s frequent intimations of the relativism and moral ambiguity of international espionage and feints toward realpolitik are nothing more than fashionably deep accessories the film shears away whenever it gets the opportunity, these suggestions of doubt quite unable to withstand the size, scope, and punishment of the action which routinely obliterates and collapses any real sense of moral equivocation.

Forgive the tone of the first few paragraphs, but there are flaws aplenty in this sixth Mission Impossible film, earning rave reviews the likes of which have only greeted Mad Max: Fury Road this decade. Most notably, the screenplay’s ham-fisted attempt to advance and texture the series, to shade in the crayon scribble, backfires mightily, sacrificing the confidence of a fully-earned visual feast for sketchy character building that is awkward and, honestly, unearned, Especially in comparison to Brad Bird’s delicious work reimagining team dynamics and deconstructing iconographic personas through motion and kinesis rather than dialogue. Comparatively, one late-appearing character’s specious return fulfills the most leaden Screenwriter’s 101 Guide to “narrative consequence,” and badly hamstrings and otherwise tightly-coiled cross-cutting climax which thrives on the tangible anxieties of its stars, one of whom is seemingly threatening his life.  (There’s also some shifty business with Ethan’s character and the relative merits of his inaugural decision in the movie, all of which the film seems to think is a genuine theme rather than simply a moment).

At the same time, Mission Impossible: Fallout is often so enrapturing that noticing its failings is rather more a display of due diligence than a serious critique. And although the action in Fallout sometimes lacks its own persona compared to Ghost Protocol, Cruise certainly has cultivated his. In rare moments of flustered knowing, such as a bedeviled head tilt amid a jerky, uneasy rousing from a particularly brutal punch in the middle of a bathroom brawl, the star shades his megawatt charisma with an invocation of self-conscious curiosity about his own position in this narrative, cinematic universe, and in Hollywood. And, more importantly, these little surreptitious moments reveal Cruise as a commentator, not simply a cipher; he becomes not simply an action hero but a Chaplin-esque vision of the spontaneous reactor, a combustion engine who intakes the world’s chaos and propels it back outward as sheer hurtling motion. He cuts a heroic figure, but also the sly gait of a man who acknowledges the absurdity of a centrifugal world and churns it at his own risk into frenetic ripples of sheer cinematic delirium. Although the film is always hurtling along, Cruise introduces a self-skepticism, daring to hold up a conjured world of truly unsupportable momentum and encouraging us to revel in the absurdity of his plight.

As Ethan Hunt, Cruise is once-again in the fulcrum around which the plot turns. After making a decision to save the life of his friend Luther (Ving Rhames) that results in the temporary loss of three atomic bombs, Hunt is tasked by a CIA head honcho played by Angela Bassett with recovering them in a complicated ruse which itself entails Hunt pretending to be the terrorist John Lark planning to purchase them. Along for the ride are old pal Benji (Simon Pegg), Luther, and a particularly unamused CIA hired gun played by Henry Cavill, and franchise player Ilsa Faust (Rebecca Ferguson) gets roped in to when the plan sidewinds into a rescue mission, the object of which is no less than the villain of the previous film.

Fallout’s plot certainly manages the tricky, turbulent task of coiling and unraveling as it trucks along, tipping its hat to the ‘40s noirs which evoked a vision of Europe as a psychological conundrum, all swivels and turnabouts which rhyme with this film’s constantly compounding carousel of action. But, while those films often served as a funeral for an illusion of moral certainty which corroded along with various physical edifices of modernity with the war, Mission Impossible: Fallout is far more direct, and, admittedly, essentially disinterested in the wages of psychological and psychic turmoil. Instead, this film wears its appetite for destruction on its sleeve, and a different, more literal kind of destruction at that. It worshipfully pummels Cruise like fetish object in a love-hate relationship, and although Cavill’s droll performance sizzles with a kind of wooden whimsy, Cruise – and the visual razor wire around him – really is the centerpiece here. Befitting the film’s combustible aura, the copious set-pieces really evoke not action in a narrative sense but spectacle out of the cinema of attractions school: imagining new spaces enlivened by a cinematic poetry of the moment. Even if they lack the slippery animated glee of Brad Bird, the film makes up for its relative dearth of personality through its, and Cruise’s, sheer physical conviction.

Which, in this case, is entirely fine, albeit only because of its truly monumental pressure the film exerts throughout. It’s a perpetual motion machine a la Mad Max: Fury Road, albeit with only that film’s seismic girth, not its deliciously disreputable attitude, its will to fissure the pop landscape with cutting brushstrokes unleashing psychic pressures, political concerns, and cartoon electricity alike. A cotton-candy piston that film was, but this new one is too aesthetically limited to earn the comparison. It still rollicks though, and when it has you enveloped – which is almost the entire time – it’s essentially impossible to argue with McQuarrie’s truly impeccable framing, let alone franchise anchor Tom Cruise’s body-quaking commitment to nearly severing himself limb from limb.

Of course, the franchise is still relatively dedicated to the principle that watching Tom Cruise running is the greatest joy to be found in life, but Fallout deserves credit for at least re-galvanizing this apparently foundational cinematic impulse with its astonishingly brutal action, orchestrating goliaths which also pummel the bones, even if they don’t shiv your consciousness. The cast and crew obviously delight in the dialectic of creation and destruction when they dismantle a pristine white bathroom with the violent, spasmodic gusto of a drip-painting artist.

There’s also a positively apocalyptic HALO jump staged like an opening of the gates of hell, not to mention a combination car/motorcycle chase which mutates the labyrinthine streets of Paris into a combination obstacle course and a constantly refracting kaleidoscope of possible routes and warping routines. None of these roads are likely to trace the contours of the self or inadvertently open-up new tributaries of knowledge. But, watching Cruise nearly kill himself on them time and time again while dexterously slipping and sliding through sidewinding streets and endlessly circular roundabouts, the film mounts an extraordinarily capable case, if only for two hours, for other, more superficial paths we all can take.