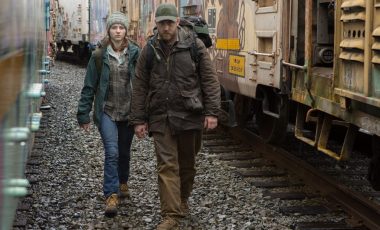 Somehow both graver and more innocent than Winter’s Bone, Debra Granik’s follow-up to her career-making film (although, how it speaks to the treatment of female directors vs. actresses that we think of what that film did for Jennifer Lawrence relative to Granik) is at once more restful, compassionate even, and yet vastly more traumatic, locating major tragedy in the most minor-key of moments. Lacking that film’s bet-hedging semi-hicksploitation which feigned genuine dramatic ambiguity and equivocation while still gifting audiences the pacifying pleasures of a clearly-marked hero, Leave No Trace is a truly Herculean drama precisely because it resists any of the monolithic or totalizing compulsions the adjective “Herculean” might suggest, moral-mapping most of all. It is an extraordinarily gentle film, almost oneiric, albeit suffused with potent undertows of melancholy, like a dream-spun fable that mushrooms into a grave-like shroud.

Yet it is, crucially, gentle in two ways, the second even rarer and more rewarding than the already-worthwhile first. Most obviously, it resists villainy, shunning any vision of the world predicated on Manichean drama and sign-posted character traits and gradations of value from hero to villain. Leave No Trace possesses no malcontents or negative actors, still a radical feat even 130+ years into the medium. But the film’s quieter triumph is its gentle expectations for its characters, not only in their morality but in the weight they must bear. Specifically, she does not bear down on her characters with the false-solemnity and universal-broadness of forced allegory. Instead, Granik frees them up to emphasize their own warring consciousnesses, their uncertainties which do not easily slide into perfect allegorical or archetypal holes. And they radiate not only their own doubts, but they intimate Granik’s own simultaneous concerns about her relationship to mainstream society and how to best compromise “outsider” and “insider” spirits. Not to mention how to even reconcile what those terms represent in a constantly fluctuating world where characters aren’t acting out of a conscious desire to “fit in” or “rebel” as concepts but simply trying to survive as best they can in their own fractured idioms.

At the same time, I could flip the implicit expectation in my phrasing and note that not only is Granik’s mind embodied in her characters, but they do not subsist within her mind, or to any typographical or symbolic weight. They exhibit too many personal failings and skepticisms, far too much particularity, to comfortably settle into the narrow chains of “symbol”. Granik’s film, in essence, is gentle enough not to shuttle its characters into narrow narrative corridors or position them as thematic conduits; rather, the people she films and imagines radiate cosmic implication through the unforced charisma of their private terrors and unstated needs. Their specificity and particularity radiates generality and universality. Based on the novel My Abandonment by Peter Rock, Granik’s film follows Will (Ben Foster) and daughter Tom (Tomasin McKenzie) who live off the grid, as Tom increasingly warms to the value of wider communities and a less hermetic existence. But the film’s attitude toward this pas de deux is never schematic; we never arrive at the conclusion that Will “represents” Granik’s skepticism about mainstream society filtered against its natural opposite in Tom’s combating desires to please her father and to “fit in”.

Instead, this film, dense with implication yet gracefully feather-light in craft, evokes a more elegiac Hunt for the Wilderpeople, or The Revenant stripped of the cloying, adolescent symbolism and needlessly tendentious displays of masturbatory craft. Comparatively, Leave No Trace is a vastly deeper film, exposing human doubts and miscommunications with serene potency and without, a la The Revenant, any obviously-manicured need to prove itself or validate its budget and film-shoot but flaunting its laborious craft and the sheer girth and masculine showmanship of its effortful production. Although Granik sneaks her hand into the expressionist cookie jar she more openly pilfered from for Winter’s Bone, her dominant milieu is more impressionistic this time out, and her drama far less signposted for us. This is the highest and rarest caliber of humanist cinema, a trancelike drama that reveals not only in its characters’ sentences but their expressions and perceptions, their hesitations and the way they convey, or do not convey, meaning to others.

Even more heroically, Leave No Trace boasts in Granik’s and Anne Rossellini’s screenplay a truly empathetic ethos, a drama predicated not on moral gradations between characters but on characters who all fundamentally behave compassionately and attempt to accommodate the needs of others, but whose desires and aspirations sometimes remain at perpendicular angles. As if the central pairing wasn’t enough, Granik’s film also traces the contours of an interpersonal relationship without myopically reducing her world to the private drama of two people, nor to the public theater of these two characters lost amidst others who view them with a mixture of skepticism, curiosity, and understanding. As the film opens up, deepens, and allows new reservoirs of feeling and perspective, we increasingly explore alternative perspectives, few of which are judgmental toward Will and Tom and even fewer are judged by Granik and Rossellini.

But it doesn’t willfully or abstractly withhold judgment either in instances where doing so would only ennoble the film with an artsy air of endless equivocation and relativism. Although accommodating whispers of political strife and wider concerns about the efficacy of living off the grid at possible harm to others, Granik’s film is mostly non-judgmental, but it is more accurate to say that it reserves judgment until it acknowledges its existence in a world where judgments simply exist. It refuses to willfully preclude any judgments, in other words, or to treat all decisions as equal, but nor does it rush to any decisions, or to anything mind you. This is a deliberate film, often foreboding in atmosphere and roving in its consciousness but never in a hurry to make a point or showily transgress cinematic convention.

It’s also a formal paradox: frosted and clipped, but also radiant, even cozy, evoking the simultaneously comforting and inhospitable quality of both nature and the various more populated spaces Tom and Will are forced into. All the while, the spellbound Leave No Trace also manages a feat of world-building vastly more elemental, peculiar, and particular than many a science fiction or fantasy film, inductively sketching portraits of various communities equally alien and homespun to us. In its most inspired formal element, the film metronomically establishes, through rhyming shots the recall Ozu at his most sublimely thoughtful and un-insistent, a resting, balanced sense of rhythm and ritual that suggests both the comfort of routine and the anxiety of having to maintain routine so as to continue living by one’s principles, imbuing the film and its characters with attitudes that are simultaneously close-to-the-vest and endlessly curious about their environs.

Curious about spaces which, I might add, Granik and cinematographer Michael McDonough also set us adrift in to ponder, avoiding any easy metaphorical shorthand which would relegate nature to a purely psychological mirror for Will and Tom’s vacillating minds. This Pacific Northwest is neither friend nor foe, neither a false refuge nor a doormat with open-arms. There is also no sense, Antonioni-like, that it exists at a willful remove from alienated modern souls that use it unthinkingly, or assume ownership over it, or simply phantasmically wander through it as a backdrop for one of Pauline Kael’s soul-sick Europe parties. Those frames would liberate nature from us while still casting it as our prisoner, as a more beguiling, less openly confrontational fiend (compared to, say, a Herzog film) that silently ponders our souls and exists for the express purpose of revealing what ails us. That’s no slight to Herzog or Antonioni, who have each directed many feature films on par with and better than Leave No Trace. But comparatively, there is a sense that Granik’s nature floats free, not as some vast metaphorical unknowable but simply as itself. Which is to say, as all of the above, as many multiphonic possibilities and perils and confrontations and abodes, as a space which cannot be reconciled with our interpretation of it.

Thus does Granik’s film suffuse with sublimated rage and anger without any of the visual conniption and aural recklessness that most films would turn to in order to bear their souls, but none of this restraint even counteracts the film’s unvarnished, shambolic aura that cuts through any sense of transcendence with the unfocused, wonderfully messy spirit of plain-spoken, everyday earth. Although there are undertones of mythic odyssey a la Winter’s Bone, this is a more realist production, one less overtly manacled to any higher purpose or sense in which Tom and Will must encapsulate the human condition rather than simply reverberate at their own registers. And what registers, especially when they’re bouncing off one another.  Through Foster’s knowingly passive and McKenzie’s defiantly submissive and hesitantly searching performances, the film evokes years of undying compassion between father and daughter, but beyond that, it provokes a sensibility of fundamental togetherness that almost precedes consciousness, as though these characters have spent so much time together that they work in harmony at a reflexive level.

Which makes it all the more disruptive and tragic when their mutually-wearying effort shows through, when we realize how Tom grows frustrated with Will’s hermetic nature and Will shades his compassion with a cautiousness about what freedoms Tom should enjoy. Even then, the film valiantly resists any and all nice-guy-sheds-outer-layer-to-reveal-authoritarian-dad stereotypes, forgoing easy gendered-readings for a more reflective exploration of how parents, particularly male parents, almost silently debate with their children while even more silently commanding them even as they exhibit not one hint of maliciousness. From parent and child, to outsider and insider, to rural and urban, the film peruses many valences of ownership and many dualisms of independence and dependence in many simultaneous flavors, suggesting the way in which Tom’s off-the-grid existence manifests in his desire to latch onto the only manifestations of power and companionship he has left.

And all of this without even hinting at the unstressed question of mental illness and the way in which mainstream society punishes Tom, whose condition results from post-traumatic stress disorder from his military days, for wanting to live a marginal life outside of society’s control. That sounds Machiavellian, but this is no anti-government screed; as with every theme that crosses the film’s perspective, Granik treats this issue with a humble empathy, an eye for supportive but confused and sometimes offhandedly, even unknowingly, dismissive government officials genuinely trying to do right by Tom and Will. The drama, as in the best character-focused art, effuses from competing but not superior or inferior conceptions of “right” adopted by each character. And characters who aren’t even sure what right is, or who haven’t the time to sufficiently consider it. Thus, trough Tom and Will, the film evokes not merely a quiet inter-character rapport but an intra-character rapport for each character, weaving a tale of loss, mourning, and unexpected pleasure, all emotions constantly shadowed and chased by others, playing out in mixed company, and never completely-decided-upon, all while enveloping new registers of doubt and missed connection by the minute.

1 thought on “Review: Leave No Trace”