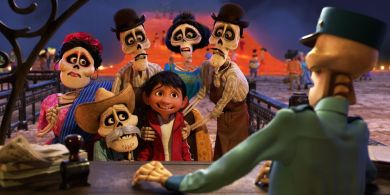 The big story with Coco is the film’s endearing expression of Mexican cultural forms. But the even bigger story, to my mind, should be how disturbingly assimilable these norms are to the way Pixar always tells stories. Someone, of course, will make the case that it’s “positive” that society can tell normative stories which happen to be inhabited with Mexican cultural forms that do not really challenge mainstream styles, that Mexican culture can be “normal”. But if Coco is a case of integration rather than mere assimilation, it also relegates Mexican culture as a passenger. The culture gilds this particular film nicely, but what does it say that it’s a “major” achievement for a film studio to make the same film they’ve been making for years, only now with Mexican culture along for the ride? I’m tempted to write off this kind of film as a nice moral achievement or “good on social issues” without actually being all that much of a film. Except I’m not entirely sure this is a moral achievement.

Predictably, Pixar’s Coco is always lovely looking, although it is only intermittently lovely. Coco is pleasant, and if you think like me, that is both and neither a positive or/nor a negative. The rough outline, and Coco is a rough outline, although how I do wish it was rougher, is that 12 year old Miguel (Anthony Gonzalez) only wants to follow his dream of being a guitar player in the mode of his idol Ernesto de la Cruz (Benjamin Bratt), who hails from the same home town. However, his family demands that Miguel be a shoemaker like the rest of them because a woman in the family, Imelda (Alanna Ubach), was abandoned by a musician and left to raise a child on her own. Ultimately, Miguel’s methods for pursuing music land him in the Land of the Dead, where he meets many of his ancestors and discovers that this realm’s prestige of sorts is the memory of the living. When a dead ancestor’s family forgets them, the relative disappears from even the Land of the Dead. One such subject is Hector (Gael Garcia Bernal), a shanty-town resident who promises Miguel that he can return him to the land of the living before sunrise and who himself is destitute because he is almost entirely forgotten by his relatives, whoever they may be.

The thematic continuity of Coco not only links to but expands or darkens the family fetish Pixar has been running hard on for the past near-decade. Coco doesn’t exactly complicate these regulation-approved themes of family, themes which, by this point, feel somewhat administrative in the Pixar canon – compulsory, ancillary, obligatory concerns to check the boxes of rather than questions to massage. But it does galvanize the theme of family with a malevolent undercurrent, a desperate bid to be remembered lest you fade from any corporeal existence entirely. Insofar as Coco does animate rather than merely depict Mexican culture, it is only once the film dares plunge into the memory of death and resurrect the demised with a wandering camera and a fiery, vigorous visual palette. At its intermittent best, Coco ignites the screen with not only a mirthfully-felt passion for Mexican culture but ignites the screen as a fertile region of cinematic exploration and adventure, a realm of not only sound and color but mystique and genuine wonder.

Coco also imagines the city of the dead as a living location, a world defined by, enlivened with, and limited through the same political, social, and economic norms which energize the living world.  It’s a burial ground for women and men who won’t stay dead, a revivified transmission from the deceased from director Lee Unkrich that, ironically, breathes life into the dead only insofar as it banalizes the living with the timeless but ossified style of Pixar, its blend of perfectionist craftsmanship and the casualty of that craftsmanship: a stultifying disinclination to gratify or fulfill any personal vision, any eccentricity which might be misconstrued as imperfect. The underworld itself is a wonderfully unfathomable metropolis, a work of day-glo beauty populated with discombobulated skeletal figures, less cadavers and more living toys indebted to the patchwork, bag-of-bones contortions of classical animation. But rather than the delicious guilt of personal exploration – being guilty of following stray digressions to its hearts contents, pulling apart its story in service of personal fancy and imagination – Coco is culpable of a much more criminal offense: letting the machinations of plot get in the way of its imagination.

Culpable on two counts no less. Firstly, the lightness of the film’s flow, its will to explore and unfasten itself to its hearts content, its ability to deal with the town of the undead in any capacity beyond backdrop, continually falters underneath the narrow corridor of submitting to the rules of story. Secondly, the emphasis on tradition and family also seems more conservative with each passing year, and a late film twist unduly implies that memory should be conditioned on traditional biological lines in implicitly problematic ways. Contrasted with the will to imagine an alternative family of two male friends and a female child that populates, say, Monster’s Inc, Coco’s ability to co-tangle Mexican culture with family in only conservative ways feels like a case of managing progressivism played out in the most depressing of corporate registers.

Cultural specificity aside, Coco does not explore the rapturous beauty of being introduced to a new culture like, even, say, Disney’s The Three Caballeros from 75 years ago. That film understood a culture as a genuinely revitalizing, cathartic experience, a stark potentiality which destabilized the core of the structure of cinema rather than merely being an addendum to be pasted on, a compulsory complement of images, sounds, and facts which comfortably slide into conventional narrative, moral, and stylistic structures. Which, quality aside, is what Coco amounts to. It’s earnest, genuine, and heartfelt – to use everyone’s favorite semi-meaningless film terms – but it does treat Mexican culture as an essentially passive set of norms to apply merely within the Pixar movie structure, right up to the hectic, final-third chase narrative-devolution.

Moments in Coco – Miguel gleefully strumming away on his guitar, effervescently enraptured by motion, sound, color, and possibility as external narrative fades away – do disrupt the propellant of story altogether. But the rest of the film suggests culture as an attachment, an acquiescent accessory to a Pixar narrative style that is more and more impacted and unmovable by the film. Having experimented with nearly every film through the ‘00s, they’ve treated their success story as a throne to laze around on, their legitimacy proven as they rehash old standards and apply their calcified, in-house style to new would-be classics. Coco is an endearing movie, but it is maybe a little too timid, tame, and sanded-down to truly plumb the morbid potentiality imbedded with the story, let alone the starling implications of the concept.