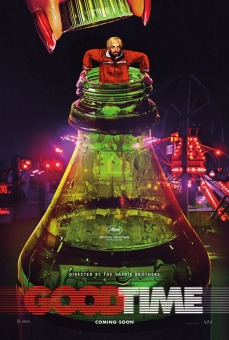 Let me rhapsodize Good Time’s achievements. Its fringe-dwelling camera and elliptical, schizophrenic editing mechanics construe cinema as visual mental collapse while somehow also suggesting that the protagonist isn’t thoughtful enough to have a collapse. All the while, it captures New York as analog-fed nightmare and white-hot horror-show, a backdrop equally viable for a demented, damaged fairy tale and traumatic study in delusional psychosis. Meanwhile, main star Robert Pattinson continues to shed actorly skin, playing a human reptile not as a lounge lizard but as hostile, unthinking, entitled, and deliberately vague 21st century American man who feels bruised by the world and thus treats people of other races as scabs to pick at. Simultaneous breakthrough and breakdown, the beauty of Josh and Bennie Safdie’s Good Time is that it exists simultaneously, and violently, in the middle of a perpetual plunge into a self-destructive stupor and as a continual deferral of realization, a displacement of the epitome or acme of that plunge so that we receive no comeuppance or catharsis, right up until the terrifyingly arbitrary conclusion. Whether or not this film is the initiation of a hopefully long-running new voice in cinema, right now, in 2017, it feels like a wonderfully tempestuous first molotov of a genuinely insurgent cinematic perspective.

In other words, Good Time is astonishing, truly, a frazzled and calamitous affront to stable or structurally-sound cinema. It brims with transitive energies and itinerant interests that warp and mutate by the minute but nonetheless violently coalesce into a harried, impulsive tilt-a-whirl of reckless decision and troubled indecision centered around the kind of insinuating modern male who radiates negative-energy discipline. He talks others into seeing things his way through conversations which occupy the perpetual tipping point between convincing and coercion. The subject this time out is Constantine Nikas (Robert Pattinson) who opens the film with a misjudged statement of principles when he barges into a therapy session and “rescues” his brother Nick (Ben Safdie). Connie is disgusted at the possibility that “the system” could offer Nick something that Constantine himself could not. Almost immediately convincing Nick to participate in an extraordinarily tenuous robbery, Constantine is soon on the run and searching for bail money for Nick who is captured almost immediately. Thus begins a lightning rod of a film, a gloriously unpracticed and wonderfully, disturbingly irresponsible black mirror imaging of male id. It feels like the bastardized negative-copy image of this year’s indie darling Lady Bird, also of the modern Mumblecore school of rough-hewn, unvarnished, even unfinished cinema.

On purely aesthetic terms, Good Time is the find of 2017, bar none. Uprooting and lashing into the back of Martin Scorsese’s under-appreciated After Hours, the Safdie Brothers cage-rattle certainty and fray the nerves with a film that unfolds in a constant state of navigation and uncertainty. It stumbles through a spiraling, staggering downward trajectory of fragile antics. And it culminates in a quasi-mythological descent into an almost-literal carnival-esque Hades that both mocks and fulfills Connie’s self-fashioned heroism, his personal self-image as a downtrodden David fighting an impenetrable systemic Goliath, or as a misbegotten, bloodied-up Orpheus ready to go to hell and back for his brother.  Cassavetean close-ups on Connie pointedly struggle mightily to locate any sensibility of compassion or understanding brewing beneath his furrowed brow and nerve-fraying bluntness. But the Safdies also rope in stylistic touchstones that Cassavetes might have cowered at. Oneohtrix Point Never’s electronic score incorporates record-hiss hums and stray, from-nowhere aural vibes accompanying warping, psychotropic images of severe 21st century destabilization. And the very-Cassavetean ever-improvised and rapidly-unfettering camerawork is in turn polluted by a sea-sick assault of heavy colors that seem to splay across the screen as if corrupting the certainty of any image.

As if formally jangling the nerves disobeying all assumptions about professional cinema wasn’t enough, Good Time is a diagnosis of interpersonal relations that rivals any of the year and, if I may be so bold, almost surpasses Get Out’s already-elegant observations on race in the 21st century. Throughout Good Time, Connie’s scuzzy, flailing, rawhide persona routinely interferes with the best laid plans – or simply the resting patterns – of others. And because Connie’s quest takes him through New York’s back alleys and hidden destinations, much of his prey are racial minorities, immigrants in particular. Connie never directly attacks any of these figures, nor even positions himself as the antagonist of them. But his hedonistic haze of entitled masculinity and self-victimhood allows him to cast himself as one of the fellow disaffected – or at best a neutral party – rather than a beneficiary of oppression. By film’s end, this blinker allows himself to play on the police’s gung-ho assumptions about African immigrants to escape a situation which he himself has instigated at the grave cost of others.

In the most striking example of the film’s ruminations – so momentary and of-the-moment that they feel more like gut-shivs than theses – on interactions among the various spectrums of marginalized New Yorkers, Connie more or less invites himself into – ie invades – the personal space, the apartment, of a Haitian immigrant family. The grandmother asleep for the night, Connie strikes up an intermittent, uncomfortable, fleeting friendship with her teenage granddaughter who bonds with Connie over their shared hatred of the police as the designated bruisers and abusers of working class New Yorkers. But Good Time twists the knife in further by conditioning this impromptu racial-bonding on the back of Connie’s essential imprisonment of the girl and her grandmother, his disinclination to even consider the fact that he is a stowaway  in their apartment holding them hostage beneath his belief that he – unlike the police – is not out “to get” anyone. A typical white male, he simply sucks up other, more marginalized figures into his personal centrifuge, letting himself off the hook because he does not actively intend to hurt anyone.

Because these conflicts are periphery and often unstated, because they do not present themselves as conflicts between diametric adversaries, Good Time is abnormally fluent in the enigmas of contemporary racism and masculinity, both contaminated with a façade of “having-overcome” and progress that afflicts a peculiar elusiveness upon various forms of modern oppression. But that’s Good Time’s game, operating against the grain of binary oppositions and either-or’s to reconstruct how Connie can be “oppressed” by the police as an Eastern European immigrant while mobilizing this oppression as a way to hinder and disrupt other minorities under a façade of communal commiseration.

But Good Time, in all its registers, deals in a currency of elusiveness. It’s an always mutating, renegade virus of modern malaise weaponized against us, the audience. It’s a film riddled with venom-soaked observations on humanity even as it enlists copious unorthodox formal gestures to broach feelings and perceptions that cohere only as an ecstatic, uncorked anxiety attack of color and sound. It’s a riot of shape and form where every stylistic truth is untenable, every moment seditious to the film as it has been experienced thus far, the mark of a cinematic mind on the move. As a result, the prospect of “narrative” as we usually define it, already raised to a fever pitch with the Safdies’ formal knives stabbing into the story’s back, encounters its mortal enemy: the crackling energy of continual displacement, all in service of the film exploring other embryonic energies usually costumed in other, more normative films as “mistakes”, “off-shoots”, “tangents”, all enemies of order. Always skittering about through mini-narratives that coalesce thematically even as they seem to be delaying the question of Connie rescuing his brother, the film remains threateningly ambiguous about its attitude toward Connie and his story right down to the concluding concussion of an image.

And when I write “ambiguous”, I mean that Good Time imagines valences of ambiguity beyond what most films could be capable of. I haven’t even mentioned how the film weaponized two variants of modernism, fangs drawn, both dueling for control: psychological interiority exteriorized – each formal gesture registering as a refraction of Connie’s unsettled, volatile mental state – and a roving sense of instability that searches elsewhere in the film beyond Connie, beyond character, rendering him a psychologically-empty blank canvas, a void of nothingness who can’t even think enough for the film to imagine a coherent psychology for him. He tellingly cannot imagine the mental states of the other minorities he meets, even if he thinks he can. Good Time does not simply dislocate cinematic conventions. Within the bounds of non-avant-garde cinema, it fundamentally breaks down narrative structures into a near-unrecognizable mass of competing neurons and violent temperaments, a portrait of modernity as a purgatorial skirmish of visual activity and human confusion, a haywire fracas to and from nowhere. Toxically addled and neurotically charged, it not only vandalizes narrative norms with a sacrilegious glee but inflicts a premeditated crime on America. It uncovers a deep, unabating national psychic trauma in the process of casting the nation as a bundle of fractious electrons, particles which not only collide against one another but collapse underneath an incessant systemic disinterest in any form of social amelioration or aid.