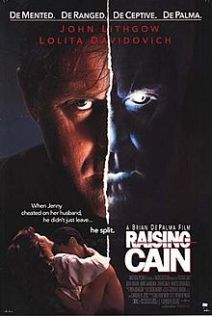 I know I should stop beating the dead horse of The Untouchables (it just doesn’t kick enough to truly live), but, Raising Cain? Now we’re talking. Five years after The Untouchables, and De Palma is back where he belongs: up to no good. Vigorously so, at that. Taking a sabbatical from tent-pole films (to be resumed soon enough with Carlito’s Way and, of course, Mission Impossible), Cain is a full-throated, fully-equipped expressionistic cluster-bomb of De Palma’s stylistic slipperiness, throwing his outre configurations of canted, dubious-perspective angles at us like a self-propagating fire. Avoiding any pretense of a sympathetic protagonist or a moral opponent for main character Dr. Nix (John Lithgow), Raising Cain lives up to its riotous name and then some.

I’ve heard Cain referred to as a labyrinth, but a horror-show, mirror-filled fun-house might be a better comparison for this film where the main obstructions to your escape are the polymorphous versions of your own self splayed out before you. This barbarically spirited film is drowning in ideas about perspective and one’s sense of identity, demanding that De Palma’s cinema serve as vessel for a refractory explosion of multiple personalities and uncertain selves. Nix, suffering from multiple personality disorder, is hell-bent on working with one of his more murderous personas to kidnap children in service of his experiments on personality development in youths, experiments which double as nefarious channels for discovering just what exactly his father was doing to him all those years ago.

It’s tosh, but it’s De Palma tosh, which means that the border between high class and low class is excitingly porous and frighteningly indeterminate. After succumbing to directorial developmental arrest when he went corporate in the late ‘80s, Raising Cain is a kind of hellbound homecoming for him, informed by the director’s fearless sense for examining incongruities in human desire. No longer fatigued by the cleanliness of making A-pictures, this nasty-minded morbid curiosity is inescapably the work of a filmmaker Dr. Frankenstein feeling the lightning shocking the tips of his hair right upwards again.  True, it isn’t as truly fretful in its stylistically avant-garde qualities as De Palma’s most devilish witch’s brews from the ‘70s (it isn’t avant-garde at all in fact). But Raising Cain’s canted angles and forced, misshapen shot arrangements are symptomatic of De Palma’s undying fixation on the terrifyingly conditional nature of perspective, both directorial and otherwise.

De Palma deploys his trademark vertiginous tracking shots with more psychic verve and thematic vitality than in the few films he made before here, bigger box office aspirations all. Rather than using long takes to follow the typical pathway of transfixing his camera on his characters – capturing their virile motion and capitalistic agency by awarding their capacity to command the space around them –  De Palma instead subverts the tenuous relationship between character and camera. During the most substantial long-shot, for instance, one character struggles to move in harmony with the camera’s seemingly preordained movement, as though she cannot take directions from a camera that De Palma seems self-reflexively aware dominates his actors but does not naturally do so. The characters and performers must submit to its will, but De Palma forces us to realize that they must work for it, that he is constricting them, that the director is a parasite and a mutualistic partner. He marks the directorial-character dialectic as an embattled and collapse-able relationship rather than a natural one.

In a Hitchcockian sense (I know, but this is De Palma, so Hitch is lurking somewhere), the tension between character and camera is also emblematic of the film’s inquiry into the psychological and social prisons we are trapped in and the human will to break free. As if that wasn’t enough, the camerawork triples as a premonition and parody of the Sorkin-esque walk-and-talks that would be all the rage by the end of the decade.

Plus, John Lithgow was made for De Palma movies. (The prior year’s Denzel Washington-fronted Ricochet is a De Palma acolyte if ever there was one, and that film’s vile Lithgow performance seems like an acrid appetizer for Cain). Partaking in an especially fraught variation on the kind of performance James McAvoy would win raves for playing a quarter-century later in Split, Lithgow unleashes multiple sides of his psychic energy for a performative study in the fraught relationship between body and mind, as well as the equally conditional connection between the self we believe ourselves to be and the self that others see. The camera, in typically De Palma-esque mode, negotiates the liminal abyss between both.

Filmmakers like David Fincher have made careers out of wishing they could lunge into dubious perspective like De Palma or make films like Raising Cain. But unlike De Palma, they’re far too pretentious and cold-blooded to acknowledge the fire they’re playing with or emulate the self-reflective cunning and self-emasculation on display here. They make the mistake of assuming a serious tone is tantamount to maturity, while De Palma’s depraved comic momentum is just gravely serious.