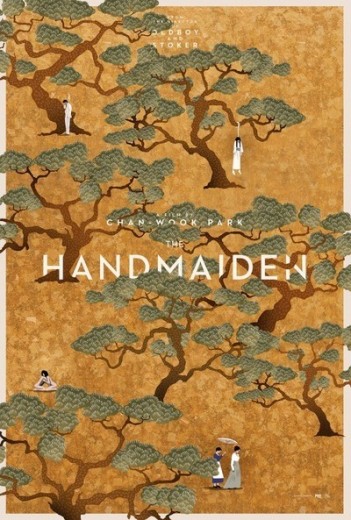 Park Chan-wook’s endlessly, even mercilessly fastidious and picky aesthetic sensibilities – ornate and obsessive in equal measure  – have never served him better than in The Handmaiden. His formalist techniques, often constricting and repressive of the emotional juices of his films, are wonderful mimetics for a screenplay which very much attends to questions of constriction and choking alienation. Set almost entirely in a Japanese-controlled mansion occupied by Koreans, not to mention in a male-dominated culture tenated by women, The Handmaiden’s mise-en-scene and blocking compound the pristine ritualistic motions of the characters who cannot break-out of their socially-structured, performative identities without incessant observation and admonishment.

Each moment must be policed, and Chan-wook’s style submits accordingly. The note-perfect symmetry and rigidly-lined geometry of the frames constitute the strangulating mood of the characters and their stored-away emotions. The geometry of space Chan-wook so ably attunes to also serves as a material enforcer of various hegemonies – paternalistic, national – that seem to make everyone a servant to someone. The layout of the screen decodes the architecture of the mind. And, while The Handmaiden’s unyielding, inelastic set-design and severe, inhospitable aura owe something to Ozu and Bergman, respectively, its indecent disposition and lecherous eye for deviance and perversion are unmistakably born out of Chan-wook’s own inky heart.

The Handmaiden is ice-cold, basically, but unlike some of the director’s earlier films where austerity was simply an art-house affectation, the style of The Handmaiden is also adjacent to questions of frigid social moorings, as well as the scored roots and thorny lesions that blister out of those moorings. Perhaps the style is even too line-of-best-fit for the material, since The Handmaiden intermittently succumbs to its sheer perfection: give a particularly adventurous film student the same script, and their aspirations would probably look a lot like Chan-wook’s achievement. Which is not to say that the student would come anywhere near The Handmaiden’s success executing on its Siberian atmosphere. But there’s something to be said against the way the film’s technique is merely a note-perfect distillation of its content, never a counterpoint or comment on that content. Even though the style fits the content like a glove, the constricting formalism of complete and totalitarian visual order is a slippery slope from embodying the themes of the film to simply emblematizing the filmmaker’s ego and own failure to let in the very air of liberation and freedom of movement he resents society for denying from the women at the center of the film. In other words, one might say that The Handmaiden is, frankly, too good for its own good.

The Handmaiden’s sheer illustrative refinement could, and may sometimes, become its own worst enemy, basically. We must ask whether the film’s unerringly symmetrical order decodes the male characters’ insecurities masked by their own masculine order, or whether the reverse is true. Might the male characters, instead, serve as proxies for Park Chan-wook, a Hitchcockian filmmaker afraid of letting go or revealing anything other than complete and totalizing mastery of the world he has created? Can the film’s prism for unlocking the repressions of society become its own prison?

On balance, The Handmaiden slips past its formal sternness like an assassin, basking in the negative visual and emotional space Chan-wook wields so well, using that emotional emptiness to sneak up on us and stab us with a seductive, scintillatingly subdued atmosphere of sexual hunger and carnal cravings. Chan-wook’s camera slithers around the corridors of the mansion, a monument to plastic superiority fashioned by a wealthy Count as though searching for the secretive satchels of passion his film so desperately needs to avoid a Fincherian fate of icy-malevolence, technical craft in service of nothingness. But Chan-wook is too canny a filmmaker to let his work pivot toward a plastic, opiated prettiness designed to woo the art-house crowd with its superficial aesthetics. The film is essentially aware that its mesmeric aesthetic perfection, its very visual voluptuousness, is emotionally confining. To only fetishize it – as Chan-wook, obviously smitten with his own skill and consummate craft, does at times – would be fatal to his film.  A story about liberation and emancipation from enslaving social and sexual mores – a return to the beauty of the flesh and the soul rather than the material world – The Handmaiden cannot only be a slave to its own beauty and, as a corollary, to the worldview it wishes to repel.

To cope, The Handmaiden plants seeds of spontaneity through personal expression, flooding with sparkles of emotional rapture and glee, little iconoclastic particles like the undeniably fleshy crunch of a peach being devoured on a smash-cut to the exploitation-influenced framing of the infamous lesbian sex scenes. On the latter, among The Handmaiden’s greatest rebellions is refusing only to treat its women as ornaments in a Hitchcockian cage or a stylistic prism. It does treat them that way initially – again, a mimetic of the world they live in. But it also re-equates them to their agency in both mental and bodily terms, even in ways as simple as the camera stopping the pitiless advance of narrative to observe the fluctuating emotional registers and vestigial longings dueling in the women’s minds, foregrounding them as emotional and conscious beings rather than pliable playthings in a story, mere totems to a wider allegory about repression.

The crowning achievements of this dialectic of liberation and imprisonment, and the dueling acmes of the film’s bubbling attitude of boiling sexual vigor, are its two lesbian sex scenes. Well, its one sex scene, perceived twice, the embodiment the film’s distaff duality: puritanical at first and then emancipatory in its licentiousness, chaste and then feral. But it might be the brief attempted heterosexual sex scene toward the end that registers most deeply as a masterclass in foregrounding the conflicted emotions of the woman rather than the feelings of the man. The camera, lingering on her puzzled and frankly bored countenance, tips its glass to her and what her face knows to be true that the man is hopelessly unaware of. The Handmaiden understands the agency of the oppressed mind that is aware of the world, cognizant of their current situation, in ways their oppressor never could be.

Who are the subjects of the film whose passions are both acquiescent to social codes and allowed moments of genuine mental and physical escape? One is Hideko (Cho Jin-woong), a Korean woman held semi-hostage – as most woman have been throughout history via norms of social propriety and the ensconcing of women to the private sphere – by her uncle. The other is Nam Sook-hee (Kim Tae-ri), Hideko’s newest in a line of personal maids, who develops and sensuous affection for Hideko that is very much requited. The trouble is that Nam also happens to be in disguise, and her true identity is a partner to a con-man, posing as Count Fujiwara come to woo and marry Hideko, to recommit her personal fortune to himself, and then have her committed to an insane asylum.

Now, them’s the throngs of a potboiler right there, and Chan-wook obviously wants us to understand that his mind is not entirely in the library thrumming through scores of Victorian novels (which were no doubt the inspiration for Sarah Waters’ novel The Fingersmith, upon which the film is based). Chan-wook has also versed himself in, at minimum, the glossary of film noir, Noh theater, Gothic horror, and ‘70s Japanese sexploitation romances, and the vitality stewing in that particular cauldron is combustible enough to enrapture the screen from beginning to end. The book was set in England, but the film hustles out of the parlor and into the bedroom, and, more importantly, navigates the European-to-Japanese pivot from a concern about class (in most of the purple-prose classics Waters draws from) to a fascination with the way nationality is, perhaps, more deeply entrenched in the far Eastern world, particularly in the early half of the Twentieth-century. But, these themes aside, The Handmaiden, is as, if not more, intrigued with the perversions of sexual theater among these men and women for whom erotica is both a release and an open-air oubliette itself. Thematically complex it may be, but The Handmaiden is plainly aware that much of its appeal is its undercurrent of sexual teasing, its phalanx of suggestive glances, its sadomasochistic streak, and its pangs and urges of desire.

Marquis de Sade and Yasujiro Ozu were ostensibly polar opposites – one abusive, lecherous, prurient, and aggressive and the other observant, placid, sensitive, and perceptive – but leave it to a filmmaker like Park Chan-Wook to create some bizarre compound-narrative out of them, by way of Rashomon. Other hard-and-fast opposites blur as well, even beyond the film’s unique ability to be a repellent and an aphrodisiac in simultaneity. Relationships, and the power dynamics underneath them, occupy multiple registers, particularly the central one between the two women. Nam is Hideko’s only friend, the only one who interacts with her on personal rather than national or gendered terms. But Nam also delights in letting Nam don her material possessions, to achieve a counterfeit-version of the class that Hideko so obviously disdains. For Nam, conversely, she too understands Hideko as an object, a “doll” for her to dress up and play with, to sculpt as she sees fit, reversing or at least confusing and problematizing the power dynamics between them. In turn, this liquidity is exacerbated by Nam’s double-identity, acquiescent to Hideko but also empowered by her ability to deceive Hideko subcutaneously. Power plays out in many, sometimes paradoxical ways, it seems, and romance is not transcendent – a volcano of effervescence capable of negating time, space, and social conflict – but mired in the tangles of the various roles and selves we occupy in the world.

And everything thus far only brings us to the halfway mark, at which time the film radically reorients itself not around a plot twist so much as an altercation with an alternate mood, a rereading of the same material that exposes its multiple valences and the interpretive subjectivity of any moment. The whole film is promiscuous about its atmosphere like that, sliding between registers like an alley cat but never arbitrarily so or for the mere purpose of shaking up ossified routines. Insubordinate to many dictums of storytelling and tone, its category crises concerning the main characters (what is their sexuality, etc) are omens for a much wider desire to upset cinematic composure and disassemble emotional monoliths. One of the film’s central conceits is to claw away the romantic kinship exhibited early on and to reveal the various brutalities – both corporeal and mental – that underwrite social codes, but it also uses this revision to recast the sumptuous romance – chaste but still formal – in an increasingly frenzied, disheveled, sweatily physical register. The film’s most sensational achievement is to compound the sensationalized and the coolly distant by repeating scenes not with an eye for narrative re-revelation – as most films would aspire to – but for renewed emotional registers.

What does this mean? Scenes are restaged from multiple slightly anomalous or incompatible states of mind that privilege altering perspectives, re-rerouting our feelings about who is in power, how they are in power, and how the word power might even be deployed to discuss people at all. The replete usage of literal perspective shots clue us into an interplay of gazes in more than one way. Not only can any single scene be framed through different personal lexicons, but each person’s gaze can mean multiple things depending on the way we, the audience, gaze at their gaze.  The Handmaiden is deeply invested in the irregularities of competing perceptions, oftentimes perceptions we were not even aware were competing in the first place. And, ultimately, not only who holds court over who but what court might even mean is a constantly pliable source of emotional and thematic energy the film mines throughout.