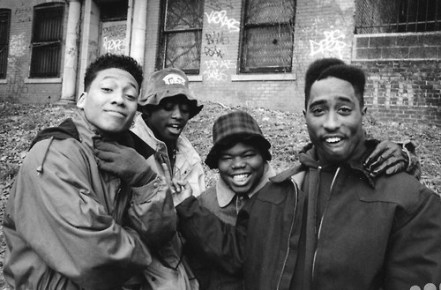 This review written on the occasion of the release of All Eyez on Me and Juice’s twenty-fifth anniversary.

Ernest R. Dickerson begins his directorial debut with the kind of concert opener that establishes imaginative kinship with his prior-collaborator Spike Lee, who Dickerson lensed Do the Right Thing and other films for. A sketchy psychedelic swirl opens up a portal to a spinning record, a marker of four-on-the-floor movement to stoke palpable creative juices, as the credits boom into place over the movement. But as the film hustles along and reveals its true register, hinting at the tiny particles of existential angst lingering beneath and structuring the free-wheeling days of its characters, the incessant and inevitable circular motion of the record takes on a much darker resonance. Unceasing and perpetual, the non-linear movement of the musical artifact increasingly registers as an emblem of life in simultaneous movement and stasis. The characters in the film – four high-school teens in the inner-city – are always on the move, always plunging into some new venture or searching for an opportunity to make money, but the labyrinthine inner-city streets are less prisms of opportunity than prisons. These boys know how to make moves, but they don’t seem to be able to go anywhere.

Right after the intro credits, the film continues its record-skipping attitude, hopping between the four main characters by way of introduction:  quasi-protagonist Q (Omar Epps), who scratches records on the streets of Harlem and is uncertain about his opportunities, Raheem (Khalil Kain), the most mature and a middle-man for the group’s more fiery characters, Steel (Jermaine Hopkins), who brandishes a boom-box everywhere he goes, and Bishop (Tupac Shakur), who is the hungriest and the most willing to act on his rage. The film that contains them bears some imaginative kinship not only with Lee’s New York films but with Martin Scorsese’s, and not only in their shared greasy, rough-and-tumble exterior. Juice is also, like those inimitable predecessors so ingrained in our cultural imagination of New York, a conscious dive into the moral architecture of inner-city life and the combustible cocktail of camaraderie, braggadocio, desire, guilt, suspiciousness, and spite that constantly boils both interpersonally – between characters – and intra-personally – within each character’s mind – threatening to explode more with each passing moment, each rogue glance.

Mostly, Juice is a slice-of-life story in the Do the Right Thing register, detailing the heightened temperatures of street-life, but Juice flares to a spark in the film’s breakout character, Bishop. Played astoundingly by Shakur with equal parts fiery vitality and fiendishly frigid assurance, he wears his stone-cold eyes like signifiers of his no-backing-down charisma and as emblems that he can see behind the confident surfaces of his friends, surfaces that he is nonetheless the most emblematic of himself. He’s a volatile, unbalanced figure, a lightning-rod through which Juice harnesses the energy of the characters’ collective cognitive dissonance about their own actions.

Early on, Bishop signals his ambitions – and to some extent, his Shakespearean aspirations – by watching the gangster classic White Heat, professing his understanding that a world where he sees no human opportunities leaves only his desire to turn himself into an American myth. When he actualizes those desires mid-way through the film, Juice descends into a shadow-laden and noirish nightmare-world of darting eyes and shaken souls that visualizes how Dickerson, as well as his characters, are not only part of African-American life, but are being subjected to the horrors of the American tradition. Like Cody Jarrett in that 1949 classic, Bishop is a vicious character, but like James Cagney, Shakur sees beyond the stereotypes of black male-ness and into the bruised vulnerability, misunderstood fear, and stress that only filter outwards as violence.

The rhythms of Juice are dialectical and conflicted, an unsettling mixture of gung-ho action and apprehensive trepidation with characters that both lunge into verbal, moral, and physical combat and lay bare their frustrations with the system that put them in the fight in the first place. Their anxious, even squirrelly, movements also hint their skepticism about whether they will really survive. The dialogue also keys into how their shared language – like any group’s  – is both a weapon and a shield, a way of shoring up one’s personality by adhering to a collective dialect that splits the difference between displays of fraternal affection and put-downs of searing, record-hiss mutiny. Mostly though, Juice opens up about a toxic atmosphere where people neither want to fight nor can fully resist it, an uncertain, antsy rhythm where characters are not defined as totalities or unilateral beings. For instance, Juice has an eye for strategic contradictions in its scripting, such as when the characters secretly and non-confrontationally rob a record store only to refuse to participate in a violent robbery – one they are essentially handed keys to – in the next scene. The film does not allow us to essentialize these men.

A work of almost classical no-nonsense poetry and melodramatic emotion – with all the stylistic exertion, moral anxiety, and incendiary attitude that implies – Juice is also a film Sweetback helmer Melvin Van Peebles could have directed. Which is to say,  is at least cognizant of the history of Blaxploitation cinema, which means many things. Among them, that it is as interested in the cutting confrontations between African-Americans as it is in their interfamilial community. The film’s interest in the former can both signal the film’s ear that the black community isn’t a monolith, affording its black characters an alterity that is an unaccustomed and invasive spirit acting against a glut of films that totalize the black population.

But an emphasis on disagreements between black characters can also suggest a problematic fixation shared by many black-starring films (but typically white-controlled, produced, written, and directed ones) to use black characters to criticize other black characters, perhaps to partially appease white audiences’ need to feel legitimized in their own secret criticisms of black people. A central failing of melodrama – why many films dealing with social crises are partially hamstrung – is that the individualist moorings of film favor an emphasis on people – symptoms of inequality  –  rather than the syndrome, the base, the core: institutions. This is a problem Juice doesn’t overcome, and – without giving too much away – Dickerson’s extraordinary cinematographic carving of Shakur in the back-third of the film does complete the transformation from uncertain black male into full-blown slasher villain, which might have more toxic ethical implications than the film thinks it does.

But the maybe-incurable inability of any work of art to explore the tangled web of social inequality does not disable talented artists like Dickerson from cutting into social inequality with their art, and neither should it hinder appreciation of that art. Juice is abnormally adept at understanding how battle between people is waged as much in bitter rhetorical questions, penetrating monologues, and shiv-like passive-aggressive put-downs as physical attacks. Both a film of social rot and collective liveliness, its aura of tragic inevitability and untreatable in-opportunity stills the soul with its awareness of people who emanate danger but are in reality sculpted by wider social energies and imprisoned in oppressive, consuming forces.

With the mind of men as its subject, Juice also understands – and drives home in its conclusion, especially the superior alternate-ending – how a plunge into an oppressive atmosphere may only be a propellant for further advances into the center of hell. This is particularly the case when, as Bishop at one point notes, the inability to control your life can steer you toward exercising what you do have: partial jurisdiction over your death. Ultimately, it is a story about the prison of masculinity, about the corrosive casualties of defining life as a masculine quest for self-actualization and a capitalistic venture for power at any cost. It is also a story about how black men – denied power and the capacity to self-actualize in any other way – attempt to assimilate into this myth, to embody this classical American ideal emblazoned in the films Bishop adores and models himself after.

However, race problematizes the film’s moral quotient, since Juice is complicit in demonizing black males for engaging in these bids for power. The film, partially because of its boots-on-the-ground style and partially because white audiences wouldn’t want to hear it, cannot make the necessary jump to take a step back and explore how society pushes black men specifically to co-opt these masculine compulsions and then demonizes them for it. Thus is the peril of genre cinema, aiming more the gut than the head. Because of this moral diminishment as well as some its hidebound genre tropes, Juice is not a great film. But it is a reminder that African-American-directed cinema starring African-Americans and about African-Americans has never been and will never be a spent force.