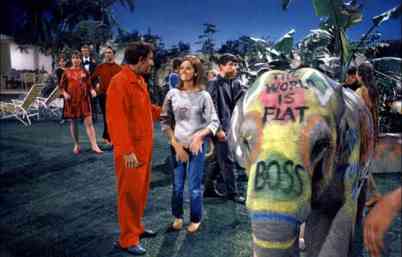 Blake Edwards does Jacques Tati in this natural evolution (or devolution, if you prefer) of the unwinding chaos of The Pink Panther and A Shot in the Dark. Toying with the perception of physical space and middle-century domesticity, The Party begins with a simple premise – an Indian actor adrift and misconstrued in a bourgeois Hollywood party – and stokes into a case for pandemonium as an ultimate liberation. If his fellow Brit Richard Lester was uniquely keyed into the beats of Beat and the menace of Mod, Edwards’ film seems to find a mantra for life in visual bedlam. Charting a path from lone Indian infection in a white person’s world to full-bore mansion pandemic, Edwards not only massages an ethnic minority’s failure to assimilate into virtue but ignites it to demolish the implicit codes, customs, rituals, and aesthetics of the Western bourgeoisie.

Even charitably, this is a dangerous prospect for a white director to tackle, rather more-so because of the demonstrably uncomfortable prelude. Hrundi Bakshi (Peter Sellers) is a misfit Indian actor who unwittingly sabotages a probably racist feature film production, ironically implying that the actual participation of colonized subjects in the project of cultural colonization is fatal. Or, if I am being less charitable, that Indians simply do not fit in to white society or that they are, essentially, incompetent. I do not truthfully know how to defend that opening, but by exploding the set, Sellers’ character dismantles white America’s Orientalist frame for colonizing the East through cinema. A dangerous prospect for a white director to tackle, again, but Edwards and Sellers move forward intrepidly anyway.

The film then actualizes this framework in its narrative, or lack thereof. The rest of the film is a relatively-real-time ritzy (all-white) party with Bakshi invited accidentally, trying to find a home in an unknown world. Far from a mere shaggy-dog story about a fish out of water, The Party marks a key missing link between Tati’s judiciously constructed panoramas of absurdist life and the tragicomic entropy of Robert Altman’s films.  Emancipating the frame from Western Hollywood clarity, Edwards’ leisurely, lazy-day camera deploys the ubiquitous ‘60s wide-screen not for organized girth – showcasing the mastery of the domineering director, a la Cecil B Demille – but for disorganization, commotion, upheaval. He creates a diaphanous and fluid screen with a camera that wanders around people-watching, taking in the jubilee of life, glimpsing people who are whispers in the periphery. Rather than panting through a narrative, The Party takes the time to notice the rituals of the upper-class. And, of course, to disrupt them.

Rather than sketching a path of progress – finding harmony in sewing up loose ends –  Edwards revels in demolition of the very scaffolding of the Hollywood film. Which means that the entire film has the texture of an outward – but not a downward – spiral, not into oblivion, but into life itself. The Party takes the characters up from passivity through spontaneity and free-form nonsense, exactly the aspects of life so classically denied to racial minorities via their oppression. Bakshi’s presence throws them out of their tidy rituals and into taking in the madness of existence. They become reacquainted with their bodies, their capacity for upheaval, for the unpoliced movement of emancipatory chaos.

And for Bakshi, The Party is not only an exploration of the stultifying impossibility of dissociating from the self in order to assimilate into white society. Instead, the film is a critique of the way Hollywood films about minorities so often coopt the narrative structure of most films about white achievement. These films, for instance Guess Who’s Coming to Dinner released less than a year prior to Edwards’ film, validate white generosity by incorporating non-whites into the aspirational equation, arguing that the American achievement narrative of capitalistic opportunity is openly accommodating to all races and is the de facto way minorities should define success. Rather than “fitting in”, which a great many American films insidiously position as the ultimate goal for racial minorities, The Party is about transformation, about Bakshi reintroducing the uptight American collective to a human soul, to inviting them to participate in the jazz principle of self-expression. His frustration at his inability to acquiesce metastasizes into a refusal to acquiesce. The house party ignites into a whirlpool of self-expression – Renoir gone haywire – and the world finds itself at last. More importantly, nothing Bakshi does is “for” the white characters; he is a character of himself, angry with the stifling party around him and eventually, finally, disinterested in following the rules of decorum.

In a totally killer Outkast song, “Rosa Parks”, the ATLiens’ gleefully and provocatively play with history by inverting that great namesake civil rights icon’s plea for racial equality, her demand to sit in the front of a bus, an area sanctioned for white passengers only, into a call to arms. Regardless of what the duo meant, their desire for everyone to move to the back of the bus connotes not so much racial equality as racial difference. Outkast doesn’t ask for equal rights. They veer off to the left, zig-zaging in search of a new course in the name of pride, asserting their own rules, creating a superior space where no one sits at all. An unknowing revolutionary and an agent of chaos, disassembling the regulations of bourgeois being, Bakshi similarly charts an expedition from failed performance – trying to be white, more or less – to imbibing in his personality on his terms. The white guests patronize him and pat him on the back like a child, smirking at his odd-fellow strangeness. But he turns his identity on them, and although the film has an air of ethnic infection – otherwise sane white people undone by catching the “Other” bug – the film is salvaged by its unquestionably positive treatment of this transformation and, secondly, by the more generally humanistic treatment of Bakshi as an everyman outsider in an artificial culture that, increasingly, seems like the exotic one throughout.

Bakshi, basically, becomes the subject of the film, not the object, and it becomes his gaze on the denatured Westerners, rather than the conventional alternative, that shapes the moral discourse of the film. Even the aforementioned introduction – Bakshi hopelessly incompetent filming a scene – is upturned immediately when Bakshi ruminatively plays his sitar in a lugubrious haze over the opening credits, locating a lone moment of clarity in his expressive cultural artistry before the film descends into always-migratory disorder.