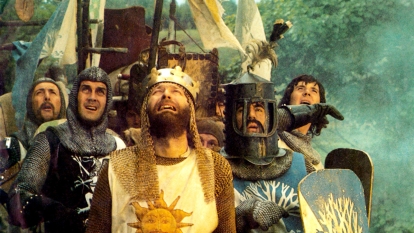 Referring to Guy Ritchie’s rather trivial take on the Matter of Britain, here are the three most interesting filmed versions of the tale.

A million and one of us can hone in on a panoply of specific moments, turning critique of Monty Python and the Holy Grail into appreciation of Monty Python and the Holy Grail as well, not incidentally, an exercise in masturbatory self-congratulation. After all, the titular creators were sketch-artists and not narrative dramatists, so it goes without saying that Monty Python and the Holy Grail is a loosely-strung together hodgepodge of semi-connected and often contradictory, incommensurable pieces. But it’s the broad swath that impresses most, the keen eye for the scatter-brained nature of myths like Arthur that always seem to be trangentially reinterpreting themselves but not moving forward, struggling to plaster up the plot-holes in an essentially fuzzy and incomplete tale striving for the hazy appearance of sense. (The same, incidentally, is true of religion, which would be the Python’s next target). As a critique of the nature of sanding down the oddities and curiosities of a badly taped-together myth in order to approximate a precise narrative, Holy Grail actually makes a nice double-feature with the previous year’s Lancelot du Lac, the only other cinematic adaptation of the tale openly attuned to the fact that myths and legends only pretend to flow easily to hide the aporias and accidents that construct their very fabrics.

The chief difference, of course, is that Bresson’s film accused the nature of myth-making by radically divesting it of any grandeur and grandstanding, while the Pythons introduce exactly this kind of suspect, macho chauvinism, male honor, national pride, and religious piety, only to assault these notions with deviation and contaminate them with their own slippery logic. Simply put, Holy Grail consigns the myth to the realm of children’s theater, a kind of national indoctrination mechanism complicit in conservative notions of morality and binary ethical distinctions. Bresson took morality out of the question, while the Pythons force morality up against its own limits, running characters around in increasingly tangential verbal circles as they stagger around their own personal defenses for the social propriety they blindly commit to. Not entirely partisan, this even extends to leftists in an early moment where a duo of peasants lose themselves to the kind of automatic rhetoric that can infect people of any political platform.

There are obvious antecedents for nearly everything in Holy Grail in the Python’s epochal TV series Flying Circus, but as with the more free-flowing and porous sequences of the show, the loose-limbed cohabitation of skits – the way moments suddenly stumble into other sequences they were nominally cordoned off from – is itself an expression of narrative promiscuity, a refusal to adhere to governing rules about how genres and scenes are supposed to be compartmentalized away from one another to preserve their integrity. Well, Monty Python elevated not preserving integrity into a mantra, tackling not only the social scripts we live by but the unofficial edicts of televisual and cinematic structures. With television, the “rule” for the sketch show was  –  broadly – separation, discreet slivers of mini-narratives hermetically separated so as to not distort the boundaries between genres, characters, etc. So, naturally, the Python’s unsealed the separations, colonizing certain skits with the leftovers or unfinished businesses of previous skits showing up where they forbidden. The Spanish Inquisition skit is probably most famous on this accord, gamely reintroducing the Inquisitors in unrelated sketches as they struggle to complete their task. Within, the Pythons commented on the commodification of time, each TV sketch a bite-size chunk of story that demanded conflict and resolution within a mere minute or two. (This logic of set-up-and-pay-off even infects most jokes). By trailing off, diffusing the pay-off into non-existence or relegating it to well after the skit ended and a new problem had been established, the Pythons mocked the arbitrariness of media that defines time capitalistically in terms of conflict surpassed by triumph, catharsis, and success.

With cinema, however, conventional logic dictates not discreet bite-sized chunks but a total cohesiveness of narrative, so the Python’s film rebuts by feigning clarity only to digress as the narrative grows increasingly protean. Loose-ends unspool outwards and diffuse into a calamity rather than centripetally hurtling inwards toward a mounting volcano of catharsis, concision, and conclusion. The Pythons stitch – using particularly sharp needles and knotted yarn –  a quiltwork of interference and interruption, taking the vaulting ambition of King Arthur (Graham Chapman) and his many knights and undercutting them with the stench of aberrance. A flotilla of deus ex machinas conjured forth from Terry Gilliam’s hand lead to conflict resolution not through the knights’ agency but random happenstance, effectively massacring the kind of Byronic self-growth afforded to these knights of the round table, and any norm of masculine virility by proxy. The film focuses not on the knights’ achievements but their disconnects, false starts, hang-ups, and the coincidences and twists of fate – and convenient storytelling ellipses – that channel them toward any meaningful definition of success.  This vibrantly disruptive and endlessly transgressive tone – coopting tools from both Termite Terrace and Luis Bunuel – is the alien attitude the Pythons bring to a tale as old as time. But the real coup is what they reveal about how their tangential narrative is ultimately not so much a metamorphosis of the original tale so much as a full blossoming of its inherently specious, elliptical construction. Basically, the Matter of Britain was a non-history just standing on one leg waiting to be toppled, and the Pythons just nudge it over. Say no more.

But the infernal cunning of the overall structure is not a slight to the individual sketches so much as a testament to the Python’s vision beyond those sketches. Each individual bit is inspired in its own right as well. It’s just that it’s difficult to arrest the restless spirit of the film long enough to fully hone in on any one skit, especially since the film traffics in the ephemerality of logic, consequence, and purpose such that what matters one minute is suddenly worthless the next. Still, the highlight reel is enormous. The “Nights Who Say Ni” pokes fun at the antediluvian and draconian tasks that often pop up as displays of masculine prowess in these tales. The “Witch Trial” takes on circular logic and then legitimizes it with an infuriating pay-off. The coconut bit cheekily shivs the ribs of filmic sound designers.

Again though, the sketches themselves have been poured-over and tamed for decades now, especially by the film’s semi-insufferable fan-base. But that legion doesn’t lie so much as overlook the real pleasures of the overall flow beyond the specific segments. The infamous ending – great misconduct against set-up-and-pay-off conventions – offers us reprieve but, crucially, no resolution for anything that has happened up to that point. But the tone of that conclusion is merely the period on a film whose vitality is derived from its rambling compound-complex sentence structure. The pernicious commodification of time one finds in any kind of self-actualizing narrative structure which defines moments by their achievement of a goal becomes putty in the Python’s hands. Rather than progress, we have delay, rather than cause-effect, we have circumstance and arbitrariness, and rather than conclusion, we have a final moment that is an existential drop-off. Imprisoned by the conservative confines of the encounter with centuries-old myth, they give us a story that wonderfully collapses under the weight of its fraudulence, laying the sketchwork-construction of myths bare. It’s totally, gloriously, gleefully amateurish (although, I admit, the misty cinematography is a nice head-tilt to Bergman). And it effectively accosts the Matter of Britain, dressing it up as Sunday school amateur hour. The film’s biting, acerbic absurdity has been slightly denatured through the pacification that inevitably accompanies canonization, but Monty Python and the Holy Grail is still an inspiring shamble of funny business.