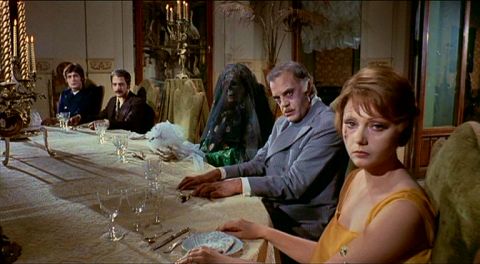 Dreamlike – and as lush as Mario Bava’s visual resplendence ever got – Lisa and the Devil is the half-crazed tipping point between the director’s earlier, Hitchcock-indebted slashers and the artistically emancipated deranged pop-art flourishes of his ward Dario Argento. Released in 1973 – and heavily recut two years later for American audiences to cash in on the Exorcist craze – Lisa is evidence not to paint Bava with the wide brush of obligatory pastiche, as though he was always performing his own idea of what a Bava film was supposed to be. Never stagnant, his films all reveal their personal eccentricities and oddities, the markers of a restless consciousness at work. A tragically comic fun-house reflection of existential panic, Lisa and the Devil recollects Alain Resnais’ Last Year at Marienbad to bridge the high and low art divide as Lisa (Elke Sommers) finds herself lost not only amidst Spanish corridors but time and space themselves.

Seeking refuge with in a faded manse owned by Alida Valli with fellow guests Sylvia Koscina and Eduardo Fajardo (as a rich couple), Gabriele Tinti (as their chauffeur), and Alessio Orano (the Valli character’s vaguely necrophiliac son), they are all under the watchful eye of Telly Savalas, who shows up as butler, a lollypop sucker, a mannequin-maker, and Gothic fresco. Or maybe they are all one in the same. Savalas, ever-capable of relishing any line given to him, massages every word into the slithering playthings of a demonic figure. Two years later, he would take the same persona two degrees north in personality and turn this suave-sinister cocktail into the slightly less evil Kojak’s quasi-slithering insinuations. His performance here practically feels like a dress rehearsal for a lost Halloween episode featuring that character. His consummate erotic pull is present as ever, but the film relies on his ice-cold demeanor to hose down – and stoke forward – the hootenanny of frenzied hot flashes that Bava’s vivid, savory visual manifestations conjure.

Even within Bava’s outre vernacular, this film is a different dialect all together. With the editing slowly unwinding into abstraction whilst paradoxically coiling around the neck, the film locks into a reverie for an indeterminate past. Questions of lost time solidify as stopped or staggered clocks. Each moment feels essentially present – as if disconnected from prior images, speaking to us as its own echo chamber or dream state – and lost in the past, as though every image isn’t quite fully formed, everything operating at a fuzzy, not-quite-filled-in murk of indeterminacy. We seldom know where we’re headed, or where we’ve been. It creates an otherworldly state of mind, producing a half-experienced, trancelike conundrum stitched together out of vague figments of the past and present, plunging us into an impossible place fraught with psychic scarring, so much so that we don’t even know whose psyche we’re talking about. It’s a broken stop-watch of a film.

The film obviously resonates with the same year’s British-but-Italy-set Don’t Look Now, a similar fresco of people pretending to be in motion but truly – as in a painting – trapped in a fixed state of being, wracked with torment and slowly bound-up in the collage of imagery permeating around them. The characters become inanimate, walking puppets playing out an oft-repeated and cyclical theater with no agency to alter the course of their destinies. Paradoxically, the set design implies a menacing life, as though massaging the characters into their positions in this carnival of terrors. Roeg-esque editing associates – and confounds – person and plaster, consistently placing one where the other once stood until the difference between human and furniture is horrifyingly negligible, climaxing in a tableaux of corpses aligned at a dining table that murderously parodies the aristocratic excess Bava is both in love with and deeply petrified of. It’s beautiful, but only as a conduit to the scalding-hot ugliness of the world. Murder becomes auto-erotic asphyxia, the audience aroused by the director’s sensual ravishment until Bava turns on us and aesthetically overstimulates us.  The luscious sensory overload mutates into an onslaught overtaking normal time and space until our airway longs for the quotidian pleasures of a less opulent existence.

The fractious canvas Bava paints reveals an aesthetic sensualist, even a hedonist, as well as a feverish moralist whose visual wit and playful gaze stabs into its sensory pleasures with a withering awareness of its own fragility and emptiness. Of course, lest viewers call nihilism on Bava, the self-contradiction so immanent to his work – enamored with and repelled by opulence – is also a positive statement to the power of cinema to invoke ambivalence and conflict, to dip us into the murk of the unknown that lies within us. Decades later, blood still courses through Bava’s veins despite – maybe because of – scores of degenerate horror films trying and failing to match him for deliriously unhinged disreputability. The fears Lisa and the Devil provokes remind us not of Friday the 13th but the horror movies of the soul that more respectable European directors were wringing out of middle-century social anomie around this time.  The euro-elegant plastically feels like a Visconti set piece in horror drag, with the decadence set to kill. If Antonioni were in town, Lisa and the Devil might be a lascivious L’avventura or a blood-soaked Blow-Up. People endlessly analyze Bava through the siren call of Hitchcock, but this Grand Guignol honors American cinema only by twisting it with a particularly giddy twitch of the death nerve. It traps Hollywood genre cinema deep in the throes of the dark continent known as European cinematic modernism.