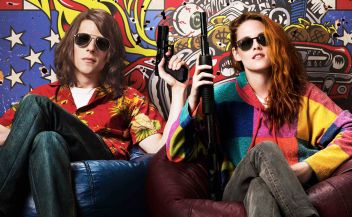 Tipping the addled, agitated, and affronting aesthetics of the Bourne films over the edge into quasi-parody, American Ultra furnishes its very filmic form with the spasmodic, alternately jittery and slackened emotional register of its panic-stricken main character Mike (Jesse Eisenberg). A deactivated hitman for the CIA who brings new meaning to the word sleeper agent, Mike’s daily life upgrades ephemera to a principle of being. Once he is targeted for elimination, the style of the film, noticing flickers of comic minutiae amidst the murder, effectively sells the overlooked mayhem of everyday life. Obviously, the most overt such gesture in the film is its ribbing at the potential weaponization of any domesticated object, finding hidden, albeit brutal, purpose for objects through acts of mental reconsideration. Although favoring the path of most-violent resistance when it comes to reanimating everyday bric-a-brac with alternative imaginative potential, there’s an endearingly ambling sense of cribbing outlines from other (action) films and then scribbling them in haphazardly, spicing them up with unkempt anti-grace in the process.

The thickets of its tonal schizophrenia prove bountiful for writer Max Landis and director Nima Nourizadeh initially, both of whom privilege the split between the slower-than-saunter pot-head rhythms of everyday life and the animated violence with the characters scurrying around like weasels. There’s a ramshackle, handicraft spirit here, more vigorous than, say, The Long Kiss Goodnight which carries the same conceit less elegantly (or maybe too elegantly and monolithically to nail the wonky personality the idea calls for). Flutters of dementoid whimsy spurt like blood, most amusingly an impromptu conversation about fantasy football in a hazy hideaway of sorts.

American Ultra is at its best when it doesn’t quarantine emotions off into sealed containers. There’s a slippery, even slipshod cartoon brawl in a black-lit, super-saturated room that half-abstracts the characters into the cartoon characters they so desperately beckon to be, and the scene is both caustically funny and incessantly brutal. Although the film is keen enough to name-check Daffy Duck, the real cartoon ignition here is the pot-fueled paranoia of visually psychedelic moments where numb characters like Mike peruse the illogical schism between their presumed skill sets, or lack-thereof, and their sudden potential for rapid-onset murder. Wonky and tonally liminal, the film oscillates between trigger-happy fabrication and lazy-Sunday musings on the nature of the self. Mike’s house carpeting is hardly the shaggiest thing on display. And delivered with real empathy between a nervous-rather-than-knowingly-superior Eisenberg (the latter is his wont as an actor) and a genuinely connected Kristen Stewart, the off-its-rocker film has enough of an emotional rock to register a character-focused kick. Brandishing their actorly talents for a partnership that is more emotionally dynamic than merely droll, they imbue a disarming amount of pathos into the film’s implicit sense of figuring out one-self amidst the carnage of having one’s mind blown into reality, or in this case un-reality.

Accosting itself tonally with wild-eyed vacillations, the real problem with American Ultra is that it doesn’t destabilize itself enough. Despite its wish to make a mockery of and adhere to the spirit of the Bourne films, its musings on the subject feel inchoate and, perhaps not surprisingly, lazier (and hazier) than they ought to be. Very much of the same arrhythmic species as Pineapple Express, American Ultra isn’t as comfortable moving between hitting the couch and the heads of its opponents as that film. Plus, it lacks director David Gordon Green’s leisurely, spur-of-the-moment charisma fastened out of the leftover pieces from his low-and-slow art-auteur days. Gordon Green negotiated how to turn navigating the rambling emotional essence of rural Southern childhood on the outskirts of society into maneuvering through weed-caked days on the outskirts of sober lucidity. But the tone in American Ultra eventually stabilizes itself on the pillar of near-constant action that ultimately lacks the carefree indiscretion and zest for invention the film requires to hew closer to the sense of free-spirited tonal play it really aspires to. Which is to say: at some point, the sense of violence-as-counterpoint becomes violence-as-purpose, and the film strays from askew self-dissonance toward a more monolithic focus on serviceable thriller mechanics.

The film does rouses for one final tonally-disreputable charge in the climax where the camera visualizes the Tex Avery absurdity nascent in the production (more fully explored in the same year’s Fury Road). Not to mention, the climax engenders points for legitimately roughing up its protagonist into an absurdly bruised and battered version of himself, looking a touch like fellow stoner-slacker rocker Ty Segall sounds. (Although with multiple albums every year, Segall brings new vitality and forward momentum to loose and sloppy slacker rock).  But, elsewhere, Ultra plays by the book too often rather than ripping up the pages, or and its scribbling in the margins are too domesticated to register as more than passing amusements. Speaking of scribbling, the film should have studied the scraggly, cartoonish splay of the fantastically lurid end credits more carefully, or at least ingested some stronger and more hallucinogenic substances, before filming. Ricocheting between overdriven action and warped musings on laconic existence should forge an ungodly communion. But American Ultra is essentially content to chart a middle passage rather than throw itself into the garbage, the dirt, and gutter, the sort of rubbed-the-wrong-way location where it could truly forage for the deranged bona-fides it desperately needs.