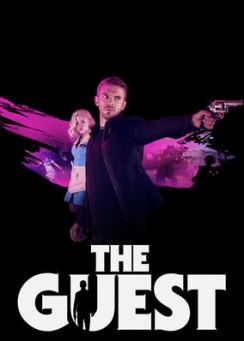 Adam Wingard and Simon Barrett’s sweaty cold splash of a film, The Guest, is a remarkable improvement on their previous collaboration, You’re Next, which was more of a conceited, self-hating concept in disguise as a sincere slasher. In comparison, The Guest is one or two fewer “explain the fear away” scenes away from a genuinely great, greasy slow-burn thriller that ignites for a climactic convulsion that is all rascally convulsive energy and Joy-Division-concert gloom. Whereas You’re Next was mostly just ugly and nihilistically neutral in its critical perspective (anti-everything), the pair of filmmakers has also ginned up an honest-to-god sense of tonal specificity this time around. In this case, The Guest is not only awash in reverie for that wonderful anxious-laconic tone of John Carpenter’s films (call it “strenuously relaxed”). But The Guest also secretes a variant of sensual sadness and even downcast sexuality straight out of Near Dark.

Admittedly, if originality is your game, Wingard as director and Barrett as writer aren’t really aspiring toward anything other than a knife-twist in the beleaguered home invasion or interloper genre. But they’re able to saunter between melancholy and chilling manipulation with such moxie, all while galvanizing their wry, witty screenplay with observations on the hollowness of domestic life and the desire to fill gaps in the nuclear family structure at any cost. The early goings are so sinewy and nervy that the film’s ultimate devolution into governmental paranoia territory can be excused. While the second-half of the film is neither as intimate nor as infernally menacing as the former half, The Guest is sharp enough of a tack to revitalize itself by marshalling one last martial charge toward a formally audacious haunted house of a conclusion.

When their recently-deceased son’s close friend from the military suddenly arrives in their small-town home bearing weapon-holstering good looks and a snake-oil slither masquerading as low-slung Southern charm, how could they possibly resist inviting this too-good-to-be-true replacement for their son into their lives? Drifting between the family’s bullied high school age son played by Brendan Meyer and the resourceful 20 year old daughter played by Maika Monroe (who, between this and It Follows, is making a career out of films that cross-pollinate erotic urges and bruised-Americana), the military man played by Dan Stevens insinuates himself into the family’s life. When his good-will gestures turn increasingly violent and bodies start piling up around the family, though, Maika’s character suspects there’s more to this guest than his glistening pectorals reveal.

Admittedly, compared to It Follows, an obvious improvement, The Guest is not as robustly alluring or sweltering with stimuli straight out of Carpenter’s toolbelt. (John Carpenter being the demon alter worshipped at by each and every one of these new-fangled two-parts sensory-suggestion one-part near-ethnographic-mood-piece films). Like many Carpenter descendants, The Guest keeps one finger on those Carpenter-esque synths that triangulate insidious, crestfallen, and erotic and the other finger on the pulse of the society for its time period. On the latter, the script finds time for pointed dialogue about society’s blanket treatment of the ex-military that suggests daring, uneasy resonances for how we may too easily, as a society, curate veterans in a hollow glow of verbal sainthood even as we deny them social opportunities. The film wisely also carves out room for nervous sexual energy between David and the family members. Elsewhere, the tongue-in-cheek screenplay never gives in to the ironic energy coursing through nearly every horror film’s veins these days, but it still teases and winks swiftly like a weasel rather than like a smugly overdetermined row of taxidermied horror movie masks. Like, for instance, a fox, a lamb, and a tiger, if we’re talking about the smugly overdetermined You’re Next.

Not without its hesitancies or over-judgements, the film’s climactic shootout reveals the still-young filmmakers in over their heads and eager to court the bigger bucks. But their hearts reserve pride of place for those lonely, woebegone exercises in sinister titillation from the mid to late ‘80s that seem to be on the verge of a cultural resurgence.  In this spirit, the film’s cult-in-the-making is much more likely to cotton to the more character-based second-climax, which pares down the grand arch of military subterfuge to the two siblings and Dan Stevens’ note-perfect villain (whose stare could melt a heart or scorch the earth). All of the plot contortions and government conspiracy intervention shenanigans lapse into “big cinema” and cast the film at a remove from its best self, the small-cinema pulse the rest of the film exhibits. But The Guest finally rouses for a conclusion that hoses down the fiery shootout before-hand, giving way to a more menacing, elastic confrontation set in a mist-ridden school Halloween party. Here, the cinematography really struts its stuff and Wingard/Barrett finally add to the horror movie echelon with a sense of weary fatalism rather than simply reiterating horror’s past a la You’re Next. Not an all-time classic, but nervy enough that you can’t wait to see who they’ll have knocking at your door next.