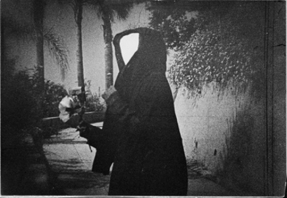 Meshes of the Afternoon

Meshes of the Afternoon, Maya Deren’s wildly deconstructive avant-garde experiment in motion, time, space, and memory, is a riotous and mangled oil slick of alchemic imagery and disruptive, positively unsettled anxiety. The images, roughly approximating the story of a woman rising stairs and encountering a deathly specter with a mirror for a face, haunt the liminal space between atomized abjection trapped in one’s own alienated soul and a more interpersonal desire to explore the precarious relationship of the self and society. Rearranging images and semiotic objects, the film is affectively charged with a spirit of dissent and a disaffection and frustration with the cause-effect linkages that structure Hollywood narratives.

Questions of fractured psychology, split personas, and self-alienation galvanize the images with irresolvable questions that may or may not link to Deren’s interest in Haitian Voodoo. (The linkages are certainly there for the scholar of Voodoo, with its fragmented and fluxional vision of personal consciousness opposed to Western rationalist constructions of fixed individual consciousness). But the questions speak for themselves even without the wider intersections between the film and political realities of the time period or comparisons to wider realities of marginalization. As Deren, who plays the main character in the film as well, confronts a vision of herself in death while wrestling with the forward progression of time so central to Hollywood narrative, the film emerges as a contest, a question, about the possibility of escape from and discourse with Hollywood style and the ideological presuppositions undergirding that style.

Death, the specter of Hollywood narrative style, always seems to test the would-be renegade, always leering around the protagonist’s back, and the main character’s failure to escape the jaws of Death suggest not only an existential angst about the place of women in mainstream society but also the ability of female filmmakers to reject the cause-effect continuity style of Hollywood so linked to notions of male agency and individual virility so often withheld from women. For a woman chased by a mirror-faced figure who bears the countenance of her own self, the antagonism and conflict of Meshes also suggests self-confrontation and the way women in Liberal society must self-police themselves to fit socially-sanctioned types. The protagonist is, in essence, confronting the patriarchic self within women in a world where men coerce women to oppress their own selves by conforming to both Hollywood’s rulesets and wider society’s.

But what really matters is not that Deren’s film externalizes oppressive formal mechanics in a character on screen, but that she embodies them in her own filmmaking act which is, in essence, a modernist psychological schism that tackles the inability of Hollywood convention to represent the complexities of modern human experience. Rather than nihilistic commentary on Hollywood’s inability to represent, though, Deren’s film explodes the rule set of representation and bends and tortures shots and edits to create a new kind of narrative or representation from the rubble. The writhing carcass of continuity cinema fails to keep up with Deren’s unholy matrimony of formal disobedience and disregard for narrative clarity. Ultimately, of course, her work is self-destructive; her character dies much as her film necessarily expresses how it is wrestling with a narrative it cannot escape form. In dissenting and disobeying, the film dooms itself to elliptical opacity and confusion, but part of the film’s argument is that ascending into stylistic confusion may be the only way to accurately pronounce how staid, settled, and domesticated a tool cinema had become for the will of the capitalist individualist narrative style of individualist cause-effect. Dissent by death expresses how deeply ingrained stylistic norms are, how formal breakage unfurls meaning until one becomes lost in the ever-present madness of fluid meaning and the pandemonium of questioning the self as an unguarded mind unprotected by stylistic rulesets.

That said, while the ending bears diegetic questions about the protagonist being haunted by a man she cannot escape from, the film’s gloriously unhinged stylistic rhythms even more vocally dissent from and destroy male-dominated Hollywood’s masculine causal-agent editing style. Which is, ultimately Deren’s coup: it is not an assimilatory gesture to feign male Hollywood’s stylistic contours but an artistic emancipator, an escape from Hollywood that turns absconding and fleeing from the powers that be into a bold, declamatory statement of protest and superiority. Deren’s film does not best Hollywood at its own game, destroying the master’s house with the master’s tools. Instead, it carves out its own stylistic niche, submerging the very idea of narrative in a swamp of such paranoia that a linear timespan or ideas of contiguous space – the building blocks of Hollywood narrative – seem all but impossible to reclaim.

A more conventional film from a female director might be sociologically meaningful, but hardly artistically so. But by not trying to scratch the festering Hollywood itch, by hurling visual molotovs into masculine, capitalist ideas of cause-effect editing and continuity narratives in Hollywood cinema (which by and large enforce masculine causal agency in the world rather than searching for alternate, more associative ideas about how to link images), Meshes is not only a vendetta against everything Hollywood holds dear and a film that exists way out on the edge of the Hollywood mindset but a statement to the possibilities of cinema to revitalize and recategorize human experience, to decry not only the industry of Hollywood but its ideological preconceptions of narrative agency, contiguous space, and Aristotelean time. 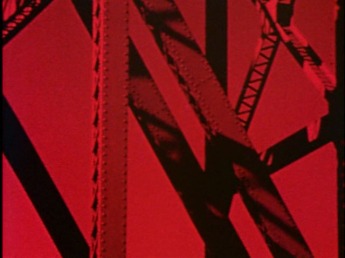 Winking at the Brooklyn Bridge with a cackling smile and camera mischief in its heart, Shirley Clarke’s Bridges Go Round is a humble gesture of cinematic revitalization through play, a work of Tati-esque renegotiation of public space, if Tati was a speed addict, of course. This wonderfully scatterbrained short exposes the filmmaking process and the ideological moorings that sediment the mind in unnecessary imaginative structures. Or, in more straight-faced terms: Clarke plays with bridges, and our heads spin round. Like most avant-garde masterworks, Bridges Go Round is primarily a theater of play, superimposing images with their ghosts, reversing the film negative, falsifying colors, and disintegrating mental shackles. It spasmodically ejaculates spurts of revisable brilliance, doubly inventive for its own refusal to sediment in its initial impressions of space or to contextualize its visual impressions in only one framework. This short, with new visions of bridge life by the second, is endlessly mobile both on screen and in the brain.

The three minute short film is repeated twice, the dense and dexterous interplay of color and shape imagined at first as a jungle of flux and improvisation backed by a jazzy intermezzo and then, the second time, as a haunted nightmare space dancing with sonic warbles and dissonant echoes we cannot call of this earth. Although the images are the same, the revitalizing burst of sonic difference ponders the intersection of sight and sound and douses the bridge in a flammable precariousness where its meaning may be molded or recast anew a second later. With the rambunctious, ricocheting energy of free-form jazz, the film ferrets us around a notion of city as synesthetic symphony, as polyphonic permutations galore, as urban dreamland, as candy-colored kaleidoscope, as un-synchronous hallucinogenic nightmare, as fair ground, and as intellectual freedom. But don’t you dare call it city as museum piece. Bridges Go Round is too daring, too uncontrollable, too dazzlingly, dangerously unwedded to assumptions about what a city is supposed to be to ever be curated for us. It covers the entire warp and woof of spatial existence, and then, not content to stop there, it invents new existences for dessert.