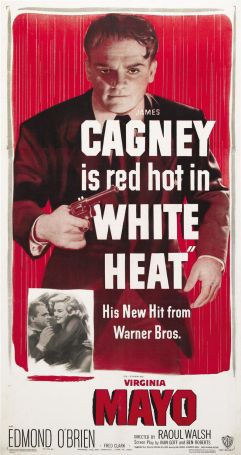 Raoul Walsh’s cold-blooded reptile of a late-period gangster picture finally stills itself only when the genre reaches its apocalyptic acme in the death-scented denouement, the fumes permeating outward off the screen. Even when the credits crawl, the film refuses to be dismissed.  The title doesn’t lie – shards and splinters of visual and sonic phosphorous sparkle right into your eyes with infectious charisma – but the punch and gusto are also counterpointed by chills of loneliness and murmurs of exhaustion. Released in 1949, White Heat evokes a genre’s last gasp, a style ready for a nervous breakdown, bracketing staccato bursts of violence to harried melancholia to disheveled, droll comedy. Gone is the wiry little slugger of star James Cagney’s youth found in the likes of The Public Enemy, replaced instead with a self-worrying work that examines its own rat-in-a-cage tempestuousness and ultimately embodies a missing link between Hawks’ Scarface and the downright pernicious onslaught to come in Bonnie and Clyde.

Released in the US amidst a nocturnal procession of cloying, dead-in-the-water “social issue” films like Gentleman’s Agreement, Raoul Walsh’s film comes locked and loaded with enough cinematic ammunition and, crucially, enough self-doubt to slap that “moral dilemma” A-picture soapbox stuff right off its high horse by showing them a true masterwork of self-immolating, existential terror. It is perhaps the last film to truly explore that nervous electron known as James Cagney, here stoked into an atomically charged fault line. He charges like a bull in heat right for the screen only to discover the increasingly smaller box his way of undomesticated, rebel-charged life is subject to in the post-war age of rising suburbia.

Written by Ivan Goff and Ben Roberts, White Heat is the apotheosis of the self-hating, self-conflicted gangster picture, a work of animal magnetism, volatility, and vitality that is nonetheless distressed and frayed by its own perpetual motion, as though sure that an end is around the corner. Even more frightening, in Cagney’s Arthur “Cody” Jarrett, the film finds a protagonist who may secretly be hoping for an end, any end, however and with however many bullets he can find it. Taking a rap for a lesser charge to keep the feds off him for a much bigger heist he pulled, he takes the opportunity for a few off-years of relaxation in prison (that he construes prison as a vacation is all you need to know about the panic of his daily life on the outside). Not to be outsmarted, the long arm of the government seeds a fed, Hank Fallon (Edmond O’Brien) in Cody’s prison unit, only for Fallon to become embroiled in conflict when Jarrett stages an insurrection and escape when the grapevine spreads news of his gang’s turmoil on the outside.

Playing like Angels With Dirty Faces’ rascally younger cousin, the narrative structure electro-shocks what would be swivels into full-on spasms, while mere jitters mutate into battered fractures. Wrinkles abound, most obviously the intervention of “Ma” (Margaret Wycherly, who chisels a grin into her stone face at one point that is the finest grace note in the film) – who man-child Cody is ever-close to – and who foregrounds the cinematic Freudian psychoanalysis that was everywhere in the waters around this time (even beating Hitch to the punch). This deeply troubled film plunges even further into the brackish waters of masculine brutishness implicit in the earlier gangster films, implying that men on the run are really just boys playing with toys all along. For its time, White Heat is playing things way out on the edges, never close to a vest it would rather straight-jacket itself with or shoot through with bullets than simply wear. By the end, the well-oiled machine of the classic gangster film (peaking in Kubrick’s still-to-come The Killing) flares into an out-and-out grease lighting fire.

Within, the inner workings of the gang themselves – a premonition of the pitch-black comic whispers of Bonnie and Clyde – suggest the coil and release dynamics of democracy, fashioning resonances for America at large as the film brings new meaning to the term nuclear family. An uneasy, deeply unstable camaraderie develops, but behind every phrase of good will lies a puncture wound in a glance or a tremble in the spine; the film invokes a perverted, anxious version of the American middle-class family, implying the contractual nature of human relationships under capitalism where every interaction, even between kin, is a scratch-my-back-and-I’ll-scratch-yours gesture. The film inscribes itself with a misshapen and bent but not unrecognizable resemblance of the American public, curtly murmuring the peril and the mirth of communal interaction. Every emotion belies darker undercurrents, with humor staggered by undertows of ambivalence about life itself as the film refuses to tame its impulses by subsisting on one emotion at any one time. To do so would be to imprison the film in stereotypes it would rather dynamite; this is a rebel’s picture, too unstable to accept the emotional rationalism you want from it.

Even without the metaphoric responsibilities foisted upon it, White Heat is formally stellar, especially in Sidney Hickox’s sublime chiaroscuro cinematography, stenciling something harshly lined out of the haunted inescapable darkness between I Was a Fugitive on a Chain Gang and Psycho, each of these films shadowing American normalcy with a grotesque facsimile of the same. Of course, any meaningful connection to WWII fear-mongering is more oblique than polemical, but the sheer affect of the style is indelible, especially when it drags the waters of the “old dark house” sub-genre to furnish a mid-film horror showdown out of the rubble of Universal Horror. The film marshals expressionism as a knife wound into realism without succumbing to any kind of obviously over-baked, degree-of-difficulty outré-style. As such, it’s best to emphasize the dynamic, robust filmmaking rather than to analyze the Freudian incisions the film offers for Cody’s maternal turmoil.

Still, when his tempers and tantrums get the better of him in the prison mess hall and Hank has to rub his neck to calm Cody down (like his mother used to), the film finds a fascinating wrinkle on the homoerotic angle and mother-incest question by bending them until they are right next to one another. Hank’s final betrayal accrues an interest that balances the knife edge of tragic and perverse because he is friend, lover, and mother all in one to Cody, who by this point has lost everything and has no choice but to climb as high as he can. He’d rather burn out than fade away, and he’s forced to confront the fact that he already faded long ago. Like an unforeseen accident, the film always manages to pile on a new kind of damage out of the wreckage of modernity; as a film, it refuses to fit like any kind of glove known to humankind. It’s the death rattle of the old genre, and it goes out in style.