With The Little Prince on Netflix these days and Kubo and the Two Strings out soon enough, stop motion is making a comeback. You know what that means.

If  we’re on the subject of stop motion, especially pre-Laika stop motion, the little hamlet company of Aardman Animations, bearing all that classic British handcraft and roguish charm, is really the go-to golden child. Chicken Run, their earliest feature-length film and their first dalliance with Hollywood, doesn’t forsake their homebrewed British scruffiness and the plasticine but soul-bearing charm. A cauldron of whimsy and old fashioned cinematic know-how, Chicken Run is a lovingly makeshift ode to the long forgotten wonder of genre that faded from the cinematic present long ago.

Although, as Chicken Run reminds, it never faded from the cinematic consciousness.  With an elegantly ramshackle, simple story to match the homey, outsized style of the animation, this is the tale of Yorkshire chickens and their yearning aspirations to escape from a chicken farm sketched like an industrial complex. Scrawled out in appropriately broad strokes, the rough, approximate form actually stimulates the unglamorous, quiet sense of desire at the heart of the tale by affording it a melodramatic sensibility. It’s a gregarious film all told, comforting in its disinclination to append any stakes to the material beyond the core humanity at the center, evocatively suggested (even announced for those unafraid of melodramatic obviousness) in classically composed shots like two chickens in the foreground, looking on at layers of a dense, fable-like background, the depth of focus suggesting both the tactility of this world (within reach) and the unforgiving, variegated separation of the different layers (without of reach, or not yet attained).

More than anything, the overwhelming sensation of Chicken Run is the affable familiarity of a tall tale, more cheeky and convivial than cunning. Not given to the sort of knowing references and misapprehensions of false cleverness dotting, and in some cases laying the mortar of, most later Dreamworks films (this being a creative coproduction, or at least a monetary one with Dreamworks), the film is blissfully unaware of unthinking, pretentious references for audiences to establish ersatz connection to. Or, more often than not, for audiences to invoke their superiority to by “getting” the references in pat, pseudo-clever bursts, turning cinema into a private mental tennis match where the film lobs nods to other films and the audience fires back to prove that it can best the film’s references. This turns cinema into a conceited, self-aggrandizing act of mental gymnastics where the goal is not to imbibe in something beautiful, thoughtfully wacky, or lively but to prove your valor.

Awakening the spirit of not only The Great Escape but the likes of Willis O’Brien and Ray Harryhausen who pioneered the stop motion style (along with Lotte Reiniger, who directed the canonical first feature-length animated release), the film admirably wipes its hands of the need to indulge in specific microwavable nods to scenes from other films. Instead, it aims for evoking the imaginative ethos of other works rather than letter-of-the-law references. Without the sort of over-worked, ever-active brain of most animated films that still somehow confine their activity to prescribed pathways and channels for success, the film does at least speckle itself with cultural contrast comedy, severing its American money at the knees in the boisterous character Rocky (named after an all-American archetype, and played by Mel Gibson, who was, at this time, the platonic ideal of the American leading man, as hard as that is to think about today). Even still, the comedy doesn’t aspire for an intellectual shrewdness but a much more inspired (in this day) semblance of casual sincerity and low-brow, down-home shagginess. For anyone concerned at the time that Aardman would sell out, rest assured that Chicken Run is no cinematic Judas; the influx of budget doesn’t outsize anything here, except the heart. 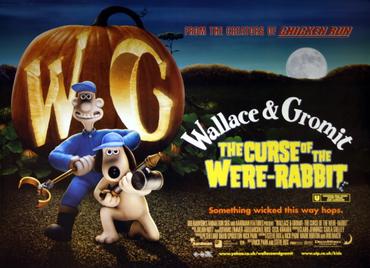 Wallace and Gromit: The Curse of the Were-Rabbit

The company’s Hollywood bona fides proven with Chicken Run, the natural course of action for Aardman Animations was a feature length extension to their bedrock: Wallace and Gromit, a classic comedy duo of over-eager buffoon and consummate, exasperated straight man with the moxie to match Laurel and Hardy or Abbott and Costello (and, in the case of Wallace and Gromit, one of them can’t even speak). But the potential for misapprehending the value of a feature-length Wallace and Gromit was well beyond likely. I mean, sure, Chicken Run saved the day and all that back in 2000 when Disney was faltering at the box office and tripling down on animated releases (the only valuable one being the least experimental, and consequently, most comfortable one, The Emperor’s New Groove, a manic screwball buddy comedy not unlike Wallace and Gromit). But that was Chicken Run, a new, untested, and not sacrosanct property. The Curse of the Were-Rabbit has to bear the brunt of uncloaking the company’s big guns from the ten year moratorium they’d been subject to. So the company’s best interests were to treat their prized possessions with stingy, gingerly care, to say the least, and the fallout if they failed…

Doesn’t matter, because they didn’t, even if the film shows its stretch marks compared to the tensile strength of the intimately shaggy 25 minute trio of features the characters were famous for initially. Those shorts all whipped-up the efficiency and casual mastery of comic timing and filmmaking mechanics that Charlie Chaplin’s earlier films, shorts themselves, utilized. At over three times that length, there’s indigestible roughage around the edges here, and not exactly to the benefit of a style that is at its most incisive when excised of enormity. But the spirit is as irreverent as ever, up to and including the way it bears the same structure as the original shorts. Beginning with home-brewing inventor Wallace’s latest invention, most of the film details the construction and application of a mind manipulation device to brainwash rabbits into not liking vegetables (in hopes of saving the town’s carrot supply and vicariously pacifying the tensions in Wallace and Gromit’s humane, no-kill rabbit hunting business in the process). Naturally, things go awry, and the vastly more intelligent Gromit (Wallace’s pet dog) must chart the right course.

Gromit, a Keatonesque bedrock tethering the madcap mania to the ground, is the standout, as he always was in the divine trio of short films released roughly ten years before The Curse of the Were-Rabbit. Voice actor Peter Sallis intones Wallace with a casually flustered British middlebrowness, but it is Gromit’s brow that rings truest. Not gifted with a voice, he is nonetheless the most expressive character in the film, significantly more expressive than your average (or any) Dreamworks Animation character of the more computer animated variety, and significantly more substantial than the traditional live-action movie character, even one bearing the dulcet tones of a George Clooney or the like. His singular brow, second only to maybe Graucho Marx (who also had a cigar, a fake mustache, and his venerable wit to abet him too, so Gromit’s brow is more singular still), is a reservoir of every emotion known to humankind.

Without all the cinematic acid of too much event, Curse is braised with a mania without ever becoming maniacal in a descent into a sudden onslaught of unwarranted complication. Even celebrity guests like Ralph Fiennes and Helena Bonham Carter slip easily into the home-cooked nature of writer-director duo Nick Park and Steve Box’s off-handed pleasantries, lengthened here but still wonderfully devoid of delusions of grandeur. With all respect to Wallace and Gromit, these two writer-directors are the real comedic twosome to worship here.