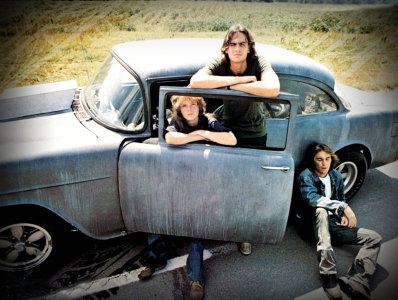 Released two years after the New Wave volcano of Easy Rider, Monte Hellman’s Two-Lane Blacktop visualizes the tattered remains of America encroaching on its own emptiness after the acid-freakout of ’69 disrupted the old ways and left the scattered ashes of the American populace reaching for new ones. Following two desecrated human carcasses played by James Taylor and Dennis Wilson as they coarse through the crucible of the American road, they search for the contours of a narrative or a life that doesn’t seem to exist anymore. We watch in vain as they grasp onto the only hope they have left: a desperate, disheveled odyssey to find compatriot-combatants to race cars with them into oblivion. Each character wanders around like a James Dean simulacrum searching – literally – for a semblance of the youthful confrontation and auto-shop phallus-comparing that they see as the embodiment of the renegade American Dream.

Monte Hellman’s film suggests the raffish, anarchic liberation of the late ‘60s now corrupted into the post-coital death throes of hopelessness. The errantly wandering path of Easy Rider is now as thick as asphalt and even grayer. The drive to find meaning in the American West, in this case the physical drive down route 66 but also something more allegorical and mental, is ruptured by the inability to discover any alternative except the abstract idea of an alternative (the two men’s search for auto-racers eventually evaporates into a vague fugue state with no goal in particular except the need to keep moving around). The communes, beacons of a theoretical new form of life, were now sharded, serrated, evaporated prisms spreading outward in disparate directions searching for new meaning, lost to the need to find anything else. The tragic irony in Two-Lane Blacktop is that this search becomes an Ouroboros. Ex-hippies spiral outward into the future by looking to ingest the American past of car culture, sabotaging the theoretical progressivism of the rebel dream by reclaiming the classics rather than actually investigating a new future.

Resurrecting the motor culture of the ‘50s two years before George Lucas’ American Graffiti enshrined a new generation of sock-hoping youths that would culminate in the likes of Grease and Happy Days, the continual hunt for other cars in this film transforms into a thirst for conflict and combat as the two pseudo-protagonists confront the older Warren Oates and engage him in a cross-country race. A race that soon devolves into an Antonionian nightmare of modern malaise constantly disrupted by potential others – potential humans to interact with – that the heroes only ever reject. They derive pleasure only from their single-minded quest to breathe new life into the cadaver of motor culture as the world around them passes by, their voyage spinning outward in a life ever in search of crystallization. The US roadway is a corporeal marker of the country’s search for a life, a mid-century opportunity to facilitate new connection and meaning by opening up pathways to new people. In Two-Lane Blacktop, this possibility is smothered by the totalizing and complete failure of the American populace to apply this construction to anything resembling actual human interaction. Potential channels for connection curdle into narrow corridors for insulating oneself while pretending to explore the world.

Fittingly then, the film drowns out the circumstantial dialogue – small-talk and road culture bebop –  in an acid-bath of rust-metal noise and flaring tires that eventually engulf the humanity of the road, corrupting the romantic loneliness of travel into a violent orgasm of unending, unnerving white-noise. Somewhere in here is a startling prefiguring and rebuttal of the road culture of the ‘70s epitomized by the likes of Smokey and the Bandit. Blacktop ponders how one heads “eastbound and down” on a toxic, directionless sludge of road that derails signals or orienting principles. The industrial soundscape borders on morbid, siphoning away the theoretically bountiful energy of life on the road.

The same sense of mangled futility is deeply inscribed in Hellman’s visuals. The cocky but lifeless personalities of the racers are themselves unwound by Hellman’s cocky visual schema that typically shifts from cosmic wide-shots – ostensibly erotic cars now victims to the vacancy of the landscape around them – to perforating close-ups of the gangly human faces trapped within a metal encasing that no longer resembles an automotive contraption at all. The glorious mid-shot – visualizing with crystal clarity he halcyon days of Bullitt where metallurgical weapon and the human predator operating that weapon existed in harmony – is almost totally absent. In Hellman’s film, cars become artifacts, circumstantial presences at best, with no visual intermingling of the metal beasts and the men who are supposed to wield them. The volition of the protagonists is a sort of sand constantly slipping away from them.

Indeed, the connection between the ostensible countercultural rebel man of the ‘70s and the hyper-institutional Big Three industry of the post-WWII period is the focal point of Hellman’s film, a deathless commentary on the way nominally revolutionary men seek refuge in the reactionary institutions of the past. Rather than discovering a new America, they run away to faded markers of American greatness they claim ownership over. The absurdly gorgeous cinematography by Jack Deerson occupies a tenuous placement in a film that is both piercingly aware of the beauty of the outside world and necessarily circumscribed by its awareness that the men only dare glimpse this world through the cars that become embankments against the existential threat of leaving the car and thus abandoning the version of American know-how they’ve precariously scaffolded their lives on top of.

Prefiguring the desecration of Motor City right at the onset of the decade of Detroit’s eventual destruction, the film depicts the failure of American industry and the American core as a catalyst to the aimlessness of the voyage of the American outsider. Obliteration begets obliteration, with the road-soaked rebel simply another corollary arm of the desecration of the core. Throughout the film, Laurie Bird imbues a girl on the trip with a knowing disaffection undercut by wistful romanticism; she is the only human to consider the beauty of the landscape as more than a vessel for a car to invade (and the few shots of cars rampaging down the landscape linger with a tear-ridden sangfroid on the landscape after the car passes, the emphasis now on the natural world the men failed to notice rather than on their empowered agency to disrupt that landscape with their cars). Somewhere out there the thickets of their lives are ensnared in decades of Americana history, but whenever the thickets come to them – as in the many disruptive intrusions of other characters throughout the film – the main characters just whizz by, life in their rearview mirror. Or trapped on the other side of their front windshield.