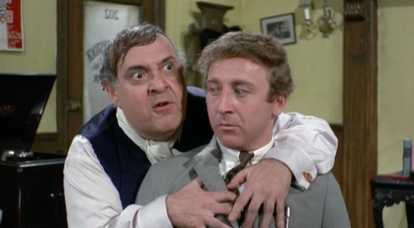 Mel Brooks turned a gloriously-still-kicking 90 years old this week, and as a happy birthday I’m sure he’ll never read, a review of his debut feature length film.

With Mel Brooks’ directorial debut The Producers (naturally, the writer-by-day writes as well), his most hostile, and therefore best, gesture is to perforate and embrace the Borscht Belt fascination with the essential and unerring failure of life itself. Its mantra being the incompatibility of the self with any semblance of success, the film’s bent is that even in attempting to fail, the only possible outcome for the universe to right itself is for you to inadvertently succeed. And, naturally, fail at your goal of failing. It’s high-concept-y, but more or less to The Producers’ benefit, Brooks plays it all low-brow, helping the film’s philosophical scripture feel more carnal and low-to-the-ground than presumptuous and high-minded.

The individual volition narratives of the American canon – rooted in Enlightenment value constructs far older than cinema – are inverted and rendered hostile in The Producers, a film governed by the question of what happens when two people reinterpret success in asocial, abnormal terms?  If they try to fail and succeed at that, they’ve still failed according to society’s expectations, proving Hollywood’s success-drive false. But if they fail at failing, then they succeed in spite of themselves, the rules of the Hollywood narrative surrealistically – and tragically, inescpably – swooping in to correct the two characters’ implicit challenge to the mental structures of cinema.

And not to spoil one of the most famous endings in all of film, but the Hollywood regulations prove too rigid to break. In the film’s conclusion, the try-and-succeed structure of individualist life, the governing principle of the morality of most of our entertainment, is forced back onto the characters like an attack dog, flattening their scheme by remaining firm and forcing them to conform to success in spite of their desires to burn that success to smithereens. The assumption that everyone will succeed if they try, an assumption Brooks correctly assumes to be a surrealistic joke, becomes a villain sticking its teeth into two people who intentionally try to fail and end up succeeding in spite of themselves. The film essentially mocks the liberalist  narrative assumption that success has anything to do with intentionality, that Enlightenment cause-and-effect are norms we can bend to our own will rather than prisons within which we are imaginatively held hostage.

If the Old Hollywood ideals assumed character success to be an unerring rule at any cost, then on the eve of the New Hollywood in 1968, the cost was 25000% of the profits of a play the two non-heroes of The Producers desperately wanted to fail. Acountant Leo Bloom (Gene Wider) discovers that Broadway producer Max Bialystock (Zero Mostel) could theoretically overfund a disastrous flop – if he was sure it would fail – and abscond with the investment money (since returns are paid out in percentages of net gross, so if it takes a dive and makes no money the returns won’t outweigh the investments, and the IRS will more or less look the other way on a flop). An early cinematic bromance, The Producers is a clever larceny not only from Jewish verbal comedy but Jewish visual comedy – which means Marx Bros. anarchy in practice – and decades of Old Hollywood romance pictures and melodramas Brooks was obviously as fascinated with as the genre pictures he would embrace soon after.

From there, Brooks’ film is the progenitor of the Brooks machine, suggesting his particularly euphemistic, personalized version of conventional narrative flow where individual scenes are vastly more important than interstitial edits or the connecting fluid (which are largely rushed by in a whirlwind as Brooks displays less interest in narrative than in chaos and joke-orchestration, which is an essential good as far as comedy is concerned). Certainly, Brooks is no Monty Python or Luis Buñuel, but the often limiting, nullifying demarcations of narrative and causal structure are liquefied in The Producers,  exhibiting a strain of anarchic thinking Brooks would pursue in more full-bodied, capricious terms soon after.

Elsewhere, The Producers displays the nascent form of his deceptively dispiriting, semi-surrealist deadpan world where the only viable solution to existential terror may be the doldrums of grim, mild-mannered acceptance to the status quo (another very obvious semi-rejection of the often-oblivious American belief in try-try-again and success as the only goal in life). At one point, the two protagonists approach an apartment looking for their ex-Nazi-but-actually-still-a-Nazi playwright (the clunker they’ve picked out to lose the day is a musical romance between Hitler and Eva Braun called “Springtime for Hitler”). Wilder and Mostel are greeted with an old lady whose only humanly response to them is an unprovoked, matter-of-fact, just-another-day:  “I’m the concierge. My husband used to be the concierge but now he’s dead. Now I’m the concierge.” Again, there’s an almost disarming sense of perpetual loss and failure hidden from the mind by acceptance and rolling with the punches, which for Brooks would not only form something of a mantra, but provide the justification for his comedy (as many have argued is true of the reaction-to-loss at the heart of Jewish comedy altogether).

Counterbalancing the concierge’s violent placidity are Mostel and Wilder, a vituperative pile of greed and a hurricane of barely hidden anxiety attacks respectively. Although Brooks is no master stylist, the punchy screwball antics of the opening credits – Mostel wooing an old lady and being unceremoniously felled by her – are authenticated by the nearly abrasive sudden impact of white bars on the side of Mostel’s round head, freezing on his face to announce his presence in the movie (or the producers, the writers, you get the deal). In a moment of flummoxed terror, he is about to be crushed by the credit bars themselves. Here, and everywhere in the film, the script is galvanized by his unfurled eyes and always-craving, hungry line deliveries that nearly brutalize the screen with violent desperation and charisma. This intro is light-hearted, sure, as is the film, but there’s a pin prick of chaos in Mostel’s performance and in Brooks’ odd framing choices, the violent white bars being just the cherry on top of the cake.

Wilder, on his way to comedy fame mostly via Brooks’ ’73-’74 reign of terror, is more panic-stricken but no less fitful and restive, similarly evoking a terrified animal of an inner soul trapped in a plastic white life, corrupted by greed and flexible moral outlook only due to his deeply human mischievousness to discover an escape plan that unfurls into an outwardly spiraling inescapable plan. His persona as an actor was an improbable mastery of ambivalence, leaving audiences in suspension between cock-sure panic, cock-eyed desperation, and whimsical melancholy, like he could slip into hysteria (of the frenzied, not comic kind) and dispassionate compassion at any moment. Although this isn’t necessarily his best performance, it is his most emblematic, a prism through which to view the modern male in all his disarmingly amusing and terrifying facets.

Brooks’ best edit, from a directorial standpoint, is a perverse scene of realization on Wilder’s part that his life has been a wash, backed by a glamorous outdoor fountain that ejaculates water upon his coital arousal. It’s the ecstasy of conceptual self-realization embodied in Hollywood grandeur and then disrupted by the petrifying boredom of cramped, cluttered reality as the shot cuts to the two men reading bargain-basement scripts till dawn. Together, the two men are a screwball pas de deux of closeted beasts whose success-drive becomes almost vicious, especially at the conclusion of the early moment in Mostel’s apartment where the men writhe around on the floor in some unholy matrimony of pain and pleasure that turns hysterical into edge-of-sanity hysteria.

Word to the wise: The Producers is also on the timid side by Brooks’ standards. His best films feel like wonderful malfeasance, schemes more or less, but The Producers is neutered, somewhere between misdemeanor and petty theft in an obvious attempt to test the waters of cinema before discovering the genius within him five years later in a duo of two of the most incisive cinematic state of the unions ever released. With The Producers, Brooks was still somewhat reined in by the Old Hollywood ways of subscription to the sedate cause and effect logic and assumptions of normality that he would reduce to ash nearly five years later with his twofer of Blazing Saddles and Young Frankenstein. The Producers is in the Brooks lexicon but it doesn’t quite yet have the specifics of the dialect down in full.

So, Brooks’ The Producers is never quite as impudent as they claim, embracing more milquetoast ribaldry than genuine filmmaking chutzpah or socially disobedient heresy. But if this has kept most of Brooks’ films buzzing vaguely below the top tier of comedy gold, the forced uncool-more-than-uncouth nature of the productions keeps them semi-popular over time. More or less, Brooks is an old-soul pretending to be a youthful discontent. He’s too lame to really be cool, and his heart lies in the mostly classic genres and Broadway melodramas he notionally parodies. If this reins him in from genuine pop-art genius, it may also be the secret sauce to why everyone has more or less liked him throughout the ages. He’s the quintessential cinematic dad joke, a semi-embarrassing head-scratcher you love more or less because he’s so happy being his tired-old self.