Borrowing the narrative efficiency of director William Friedkin’s previous film The Hunted but inverting the no-emotion-allowed melancholy and frightening objectivity, Bug is an affectively charged full-on assault of sticky predator-prey dynamics and visually and aurally hissing subjectivity. By some definition a head-scratcher, Friedkin’s adaptation of Tracey Letts’ esteemed play (here scripted by Letts as well) gallantly avoids the nullifying narrative histrionics of most ‘00s “screw with the audience” cinema. Rather than throttling us with narrative momentum and thereby affording his film no breathing room, Friedkin visualizes the subjective mental combat of the material by ricocheting us around a stylistic, mentally expressive pinball machine.

Shockingly reticent for a stageplay adaptation (Letts obviously knows how to cede control to the person whose day-job it is to operate with cinema form), the dialogue is diffused outward into the visual entropy of Friedkin’s single-set mental pandemonium. The architecture of the film’s subjectivity lies somewhere in the sickly, sinister blues of the cinematography and the obviously disturbed editing that feels like a lightbulb of the mind flickering on and off. No morass of stilted “spot the meaning” moments, every image is a question mark wrapped in an exclamation mark and every statement of commentary is a tightly-winding inflection point defined primarily by the nervousness of a jittery camera that questions meaning more than announcing or clarifying it.

Trapped in a hotel room under the sneaking suspicion that her brutal ex-husband is out on parole and may be on her trail, Agnes (a career-best Ashley Judd), the film’s scenario begins when her nominal savior – Peter (Michael Shannon bringing his especially nervous concoction of twitchy passivity and barely-together friction to the role) may turn out to be the last tick on her path toward insanity. An ex-soldier, Pete is afflicted with an unquenchable belief that he has been infested with Government-issue bugs in his body, the reality of which is more or less irrelevant in a film that is invested in the more important questions of agency and human relationship between the two principles as they bond over a shared, and possibly demented, outsider status that ebbs and flows like the torrid waters of Friedkin’s manic, frenzied camera.

Less a body horror film or a mindfuck (as it was advertised) than a dalliance between the body and the mind where the dancing happens to be particularly unhinged and malignant, Bug is primarily a descent into stormy psychosis ensnared in Friedkin’s iridescent craftsmanship. A study in the limits of empathy, the audience can’t but register concern for the two people as the camera around them both visualizes their inner torment and fractures their own world. Nearly free-associative incisions – images not unlike the gross shots of festering meat that pinpricked The Texas Chainsaw Massacre – terrorize the two figures, threatening their composure and their mental balance as this unquiet film destabilizes their unquiet beings.

The film doesn’t only intimidate the two people irresponsibly though; it perforates into their loneliness and splinters their mentalities, spreading their minds all across the screen. Bug isn’t a masterpiece, nor is it actually a great film, more a symposium in exploitation style than a stone-cold killer. But, after the critical misfire of The Hunted, Bug is a smashing little devil of a closed-casket psychological thriller where the screen’s eye, the film’s form, is the mind of the film itself. It’s hostile and agitating – but, you know, so is schizophrenia – with expressionistic sound constantly deteriorating the characters’ mind, and our own, by the minute and disrupting the assuredly minimalist, theatrical nature of the set. As a study in churlish codependency, the psychotropic Bug is a totally immersive experience in unhesitant visual tyranny that feels gloriously harebrained and mentally unsupervised, a work that irks only because it has something to say about lonely minds that are as uncomfortable as the film itself. 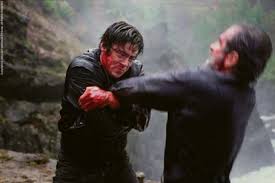 Misunderstood upon release, William Friedkin’s essentially amoral chase film is the nihilist, swampy cover version of the decade-before The Fugitive, also starring Tommy Lee Jones in the role of a morally uncertain hunter. While that film, Hitchcockian in its innocent-man-wronged propulsion, preferred visceral to moral stakes, The Hunted embodies a modern world where viscera is essentially a replacement for morality. Sickly looking and jaundiced, this ostensibly pedal-to-the-medal chase film is deviously terrified of its own amorality, leaving the essential moral worth of its antagonist unquestioned as a harsh statement about a world so often without time to question in the first place.

Friedkin’s film is the platonic modern embodiment of his ruthless ‘70s films – hell, the man directed The French Connection after all. Nominally a chase film, the two principles are Benicio Del Toro, essaying the murder rampage of an ex-military soul with cunning vacancy, and Tommy Lee Jones, the man who taught Del Toro’s character everything he knows and is now called in from the respite of his retirement to bring his former student down. Friedkin’s momentum-focused style is too implacable, though, to characterize the two men as haunted lost souls, displacing Jones’ moral qualms about killing his former student to the actor’s impossibly weary eyes. Rather than nullifying though, this lack of emotional reflection is bracing and disarming, a frightening depiction of men of action whose lives are so devoid of alternative emotion that the idea of reflection is never acceptable for them. In the few cases where Jones intimates possible regret, the film proposes that the world doesn’t have any breathing room for men like them to consider what lurks within them.

Minimalist as a virtue and a statement of identity for men who live via minimalism, The Hunted is almost pure cinema, a film of violence-as-movement devoid of the wishy-washy male posturing and macho-poetics of most mano-a-mano cinema, choosing instead an exploitation-film-worthy emphasis on lean, mean filmmaking virtuosity and the feral chops of Friedkin’s camera. Del Toro’s motivation playing a character who has spontaneously burst into murder is left untouched or only suggested, turning the story into one of impact and tragic consequence rather than cause, the film knowing full well that it can’t clarify something this frighteningly ambiguous so easily. Rather than attempting to divine the essence of his character, the film silently sheds a tear of creeping awareness for the fact that the effects of his actions – at least among people more concerned with punishment than understanding – necessitates only brisk, brutal response.

Friedkin’s film is all the more melancholic without the explanation, displacing the film’s worldview for the camera to quietly investigate almost sans wordplay. The introductory character moments, both principle characters depicted in action, are palpably asymmetrical as the film establishes the conflict implicitly via the contrast between the murky, neo-realist camera as Del Toro takes out a target and the pristine but placid, pointedly empty whiteness of Jones disarming a wolf trap. Words are irrelevant for people who live via movement and stillness, realizing their identities in their gait and eyes rather than utterances from their mouths. Friedkin’s lens registers grisly movement and the soul-rotting mud textures of violence with a pointed arbitrariness.

What little dialogue there is happens to be terrifyingly utilitarian, implicitly sounding off for a frayed, harried world where utility is the only premium and time affords for nothing else. The words also bear witness to a complacent, creeping finality devoid of any poetics – every conversation in the film is suffused with a hollow arbitrariness that is existentially unmooring, suggesting that everyone’s actions can’t but approach the same depressing conclusion. The nasty worthlessness of everything in the film is corroborated by the serrated camera that is energized and unhinged in the forest when the two men fight and timid in so-called civilized society to showcase the main characters’ natural state away from the built-up world around them. The fetid, primordial green forest is more alien than earthen to us, visualized in harsh contrast colors opposed to the sanded-down look of the populated human world.

Ultimately, The Hunted is one of the few films about the army as dehumanizing machine that tasks itself with embodiment rather than commentary: the film is the primal idea of the dehumanized killing machine, devoid of breathing room to speak or explain or qualify itself. Rather than having a theme, the film is its theme in a frightening display of form and content in unforgiving harmony. This isn’t art with theme, but art as theme. Primeval in its refusal to negotiate greater conflict or inlay meaning or enhanced stakes, this film is frightening in its fundamentally hollow, to-the-bone nature, a void with no meaning. Although it aims for the carotid, the action renders as desperation, with a finale feeling not like crescendo or climax but like the arrival of a creeping finality, a bitter fact fearlessly devoid of manipulation or meaning. Like the film, it’s just a kill.