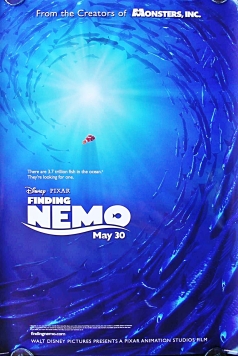 Let’s just say I think the reasoning for this one speaks for itself.

With candor, Finding Nemo really is a case of the old nuts and bolts more than a phantasmagoria of unprecedented, delectable delights, which is just fine when the nuts and bolts are this well nutted and bolted on.  Pop Daddy Production Company Pixar’s reputation has gotten a little ahead of itself over time, with the disappointment of their recent slate of films erected mostly against the assumption that their run of early films are unimpeachable masterpieces, which is itself a presumptive claim. Personally, WALL-E is likely the only film in their canon that legitimately earns that superlative in the way that, say, a Wellesian motion picture might, and frankly, there’s no pretension in that statement. Not every film needs to b a masterpiece – the spit-fire implications of such a term only weigh down on films that aren’t really trying to be, anyway. Ratatouille is divine Chaplin, Up is a startling Douglas Fairbanks adventure mixed with Warner Bros. anarchy, the Toy Story films are all impeccable each in their own way, and Finding Nemo is a technical powerhouse emboldened with the flirtatious, often rapturous beauty of ani-magic. Why does it need anything more?

Plus, it’s enlivened with a deceptively mature prognosis about flailing adulthood in a desperate papa-bear panic, opening on a genuinely frightening mini-movie that details, almost sans dialogue or exposition and in primordial visual blasts of energy and shifting framing, lighting, and camera pace, the death of Marlin’s (Albert Brooks) family. All excepting the runt of his prodigious litter, Nemo (Alexander Gould), who Marlin erects as the only remaining pillar of his self-worth with an almost terrifyingly imperious anxiety and control over Nemo’s life.

Of course Nemo goes missing, which catalyzes a sort of long-night-of-the-fish for Marlin as he, with memory-challenged friend Dory (Ellen Degeneres, manic and animalistic in the best way), goes on the hunt for his son’s whereabouts. Naturally, this is the impetus for Pixar to have a cow with other bite-sized chunks of an essentially episodic road movie narrative about desire as a sort of essential compartment of human being, the building block upon which we construct our “must push on” lives no matter how foolish the quest or implacable the opposition.

Oddly, in this way, Nemo is a progeny of not only decades of American animation but the corpus of Wim Wenders, that German chronicler of wide open spaces and geography as a vacant lot we architecturalize with possibility, need, and our interest in making meaning out of the endless potential around us. Physical and mental space are a dialectic, each crystallizing, pioneering, and structuring the limits of each other. And if Nemo isn’t exactly up to Paris, Texas or Kings of the Road levels of philosophical hurt and resplendent visual pangs of suffocating but outward-spreading emotion, well, that’s not a standard any film really needs to live up to in the first place. All of this means that Nemo is mostly a deceptively lithe, personalized, intimate film where we expect something of a mythic, gargantuan adventure; in the Wenders spirit, it’s a story about how the grandest adventures are the ones most closest to the heart.

But anyway, any worthwhile theme is the repercussion of craft, and Finding Nemo is at times a divinely crafted film, even if most of the decisions are of the straight-up film-school “make it good” variety rather than the “how do we mess up the medium” one that something like Wall-E inches perilously near to. The opening is, as mentioned, a tight little masterclass of perfect, if obvious, screw-tightening worthy of Hitchcock, and the film drifts toward “peerless” from time to time, even if it is mostly content to define peerless in relatively conventional, non-specific ways. Certainly, it has tone down like gangbusters, not so much swiveling between moods as imbuing the whole film with dueling pensive melancholy and incandescent revelry, with an ever-creeping doom and capital-A Germanic Angst just lurking right outside the film’s safety zone threatening to invade it, which the film gallantly affords for with points of existential crisis ingress all around.

More elementally, it’s a looker, which no one will likely deny, but its rhapsodic color fantasia is never gaudy or garish, always tethered in – but not reined in – to an emotional front. The camera is graceful but not safe, spastic but not overbearingly spasmodic, and the colors pop without sacrificing the purpose or the tactility of the space. The shot selection – insofar as shots are applicable terms for animated features – is an indelible mixture of straightforward but inarguably correct notes that deviate from fugue to rhapsody on a moment’s notice. The acme is an expressionistic, primally-lit deep-sea trench sequence where a nightmare guising itself as a fish attacks Marlin and Dory, but nearly every scene is the perfect version of itself, even if that self isn’t exactly perfect. What the film renounces in experimentation, it recompenses in quality and calibration.

If the Pixar wizards are the heart and soul of the film, then Brooks is the lungs. Or, I guess, gills. Whatever. Brooks is divine in the role, exuding a broken-down, schlubby, fatherly loss that is quietly heartbreaking without really indulging in any of the sort of capital-A Acting we get in many melodramatic animated fables. The obvious themes about letting go and trusting in your children abound in Brooks’ everyman voice, but the most incisive offering here is wrought from the wonder of the film’s episodic nature: the beauty of difference, or discrepancy, of personal foibles, and of different species and selves interacting and bettering themselves not because of their willingness to elide their differences, but the potency and courage to embrace them. The semi-structureless narrative becomes a paean to the structureless charisma and shifting energy of embracing the tangents and the adventures of unplanned entropy. As Dory at one point intones like the best Yogi Berra malapropism the legendary player forgot to utter, “You can’t not let anything happen (), then nothing would ever happen ()”. Finding Nemo is very, very good, and we should champion that absent any gossamer fabric pump-ups or delusional claims of majesty. Bluntly, Finding Nemo doesn’t really need masterpiece status.