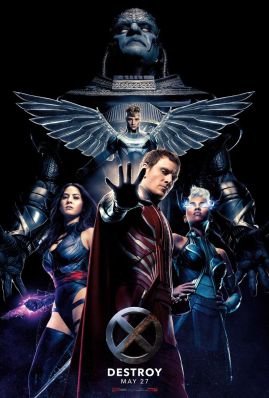 Would that the rambunctious punk attitude halfheartedly flaunted by X-Men: Apocalypse in a few of its extremities (hair, costumes) had descended into its major organs as well. A structural makeover, with a rebellious narrative more fascinatingly fractured than the milquetoast clash-of-kings promised here, could have made Apocalypse more than the competent, if bog-standard, throat-clearing exercise it ultimately is. On some level, the film retreats from the structural excess of previous film X-Men: Days of Future Past , where an overlapping, byzantine time labyrinth sometimes got the best of the humans trapped in its machinations. The longer but ultimately leaner (read: simpler) Apocalypse is a little more punk and less Rush this time out, despite the de rigueur world-ending climax that’s more or less accepted by this point in superhero cinema history. But it never attains the snotty, vituperative snarl of the Sex Pistols, the discombobulated comic brio of the Ramones, or the stylistic omnivorous brashness of the Clash; instead, it expends quite a lot of energy wallowing around in a state of blissful neutrality, not accomplishing much but doing an acceptable workaday job arriving at its mostly trivial end-goal.

The band references on my part aren’t arbitrary; a great deal of the screenplay (shockingly, the first two-thirds of the picture), is expended preparing for a proverbial battle of the bands (getting the old crews back together, infusing some new blood, that whole thing). By the time our two sides first clash, the production is nearly on its merry way out the door. The just-one-more-mutant parade is, in this case, not the film’s interstitial comma but its main clause. Most of the film follows ancient mutant overlord Apocalypse, arisen after a 5000 year slumber, gathering his four lieutenants in preparation to lay waste to the world (Why four? Good question). Ensnaring Michael Fassbender’s Magneto (returning for the third film in a row) and Alexandra Shipp’s Egyptian weather-wielder Storm (a sharp new addition), as well as two less important figures in the form of Angel (Ben Hardy) and Psylocke (Olivia Munn), the only obelisk in his path is Magneto’s old sparring-partner Professor Charles Xavier (James McAvoy) and his merry band of gifted youth.

On Xavier’s side, at minimum, the-now-possibly-famous Nicholas Hoult returns on drums as Hank/Beast, the only mutant with the animalistic impulse to give Dr. Teeth and the Electric Mayhem’s stickman a run for the money. Tortured, inherently individualistic shape-shifter Raven/Mystique (Jennifer Lawrence) is back as Xavier’s singer/band leader after disappearing for a decade (the nature of her tentative relationship with Xavier is one of the two major subplots grasping for air beneath the murky hammer of we-must-end-the-world, the other being Magneto/Erik’s desperate plea for belonging in a human world that just keeps clogging up his works). A cadre of youthful newcomers shore up the ranks, the de facto “most important” of whom are Tye Sheridan as Scott Summers/Cyclops – who can expel protoplasmic rays from his eyes – and Sophie Turner as Jean Grey, the only mutant (Apocalypse aside) who can theoretically match the cue-bald Prof. for mental dexterity in the form of telekinesis and mind reading. If the analogy fits, maybe they play electric triangle and mellotron, respectively? In this film, it is the ‘80s, after all.

After six films, it’s faintly depressing that the writing has yet to overcome the series’ contentedness to occupy a liminal space between vaguely humanistic plea for the exceptionalism of supposed “others” and the questionable “talented-tenth” dominion of the series’ insistence on catalyzing everything around the “best” mutants as the saviors of both all mutants and mankind. That the series continues to insist on the importance of this theme has yet to translate into meaningfully descending into its thornier regions or actually excavating new crevices of the topic. One wonders if the supposedly less-exceptional mutants who can’t measure up to their leaders might be more dramatically potent protagonists, but this takes us down a rabbit hole of more immanent problems with the superhero genre to begin with. At least, thankfully, the film isn’t as mired in respectability politics as Days of Future Past (mutants no longer need to “prove” their worth to the world, or at least, this is no longer the moral imperative of the film).

Ironically, Apocalypse’s inability to actually massage the  “will humanity accept them” pillar of the series theoretically provides extended breathing room for the characters to explore other personal crises among themselves. That said, the film isn’t necessarily invested in pursuing that line of questioning either, at least not when there are metal-pyramids to erect and Eurythmics songs to be played (the latter, by the way, serenades the film’s one true moment of cathartic, kinetic delight, precisely because it is the only scene where the burden of validating the series is nothing but a distant rumor in the face of the film’s sheer joie de vivre and free-spirited spunk).

While Fassbender is recalibrated as little more than a hired goon for the waning half of the movie, he is unsurprisingly the most effective actor in the pack, masquerading his character’s negligible role (and the functional dues ex machina he represents at the end) in a cloud of quivering internal conflict. McAvoy is given less to do, but his passivity and befuddlement at the hands of Raven’s return is a nice personal tick. As per usual, there’s dwindling room for individual effervescence in the deluge of new characters, but Evan Peters, as Quicksilver (a gimmick in Days energized and sculpted into a genuine character here) and Kodi Smit-McPhee, as the German devil-bodied Nightcrawler, emerge relatively unscathed as the best newcomers here.

The same cannot be said of Oscar Isaac’s Apocalypse, who tries in vain to transform a swamp of blue makeup into an emotional frontline, a herculean task given the nature of the screenplay. Newton Thomas Sigel’s neon-tinged cinematography is appropriately garish as both a smirking suggestion of the nebulous 1983 setting and as a conduit for the film to submerge itself in near-horror when Apocalypse is little more than a hooded shadow or a Boris Karloff impression early on. But the emergence of the character as a pro-wrestler-cum-demagogue by the mid-point sacrifices the mystique Isaac might have lent to the role. Plus, his brutish charm as an actor is impossible to work into the walking plot device of a get-everyone-together-for-the-next-film oblivion-tempter.

Not quite going-through-the-motions, Simon Kinberg’s screenplay for Apocalypse nonetheless boasts little charisma or panache to sell any sort of peculiarity or personality beneath all the mass destruction. Fox’s X-Men franchise has, fan-boy opinions aside, always hovered somewhere within two standard deviations of the superhero norm; the third film, The Last Stand, is somewhere around 40% power for a superhero film, and its predecessor, X-Men United, enlivened itself to just close to 75% (although the increasing homogeneity of the Marvel machine raises that number up a few degrees every year). Yet never before or since has a film in the franchise seemed so content to wade around on the line between shallow waters and the deep end, to exist in a state of perpetual détente when something more hostile – in either direction, good or bad – would be more cinematically interesting. Very little is actively wrong with this film, but it is hemorrhaging precious few strengths either.  With Apocalypse, a film with more of a vested interest in the franchise future than the here-and-now of this film, the usually reliable Singer is relying more on the implicit threat of violence than any real impact.