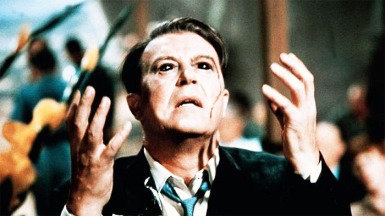 Roger Corman’s films and their narratives were typically barely masqueraded Cinema of Attractions spectacles, experiential flights of fancy rooted in an insatiable thirst to expand the human eye itself. What Corman understood, something many a better filmmaker has conveniently sidestepped, is that cinema lives first and foremost on the surface and with the eyes. The brain, the mind, the heart; they all draw oxygen from the senses, not the other way around. So many filmmakers ladle their cinema in a bath of surreptitious symbolism or overly-curated suggestion that they exist only, exclusively, in the abstract nebula of the intellect; the beauty of the art itself is often the aesthetics of appearance that prefigure and often elude the capacities of our mind define them. In attempting to explain everything, to append meaning and content to the deliciously provocative uncontainbility of nature and the senses, these filmmakers fail to grasp what is right in front of them for the taking. As Susan Sontag so eloquently wrote, in searching for the truth beneath the surface, they fail to see the thing at all.

Corman kept his films on the surface, much to the disdain of more intellectually minded critics, and with X: The Man with the X Ray Eyes, he arguably gave those critics the proper burial he felt they deserved. Quickly dispatching with Dr. James Xavier’s (Ray Milland) insatiable quest to test a new formula that allows him to see beyond the realm of the physical, his film turns into a ruptured lament for the surfaces in our lifes. In Xavier’s increasingly torrid ability to see beyond the surface, the film locates an expression of the terror of being granted the freedom to see everything, and in doing so, losing track of why one wanted to see in the first place.

Of course, what matters more than the vendetta Corman may have had against this conceited ego complex is the actual surface of X itself, a garish fantasia of imagery and camp threatening on the frontier of terror. Early on, the external surfaces of the film are domesticated and trivial to the point of suffocation; the barren, crestfallen, purposeless deluge of sickly colors contrasts with the more fluorescent, primary-colored images of Milland’s new sight, with the film investing in the latter as a form of  liberation and freedom. Milland’s new sight literally quenches our parched throat for visuals that pop rather than stagnate.

But the colors that race before our eyes eventually sputter out in a careening nose-dive off the cliff of Lovecraftian oblivion. Milland’s ability to glimpse the unglimpsed only allows us to grasp the brutality of knowing everything to the point where knowledge, meaning, itself becomes a predordained cavern of known facts devoid of the mystery that may give life its meaning. Throughout, Corman not only expands Milland’s ocular sensibilities until they plunge into an abyss where nothing is immediately discernible, but he clutches tightly to Dr. Xavier’s ever-decreasing grasp on the very external world he pines to surpass in the first place. His disinterest in the will of other humans, as well as his inability to consume the humanity of others, is palpable from the beginning, suggested in his urgent, clipped reticence to accept the words of others and his need to control conversations. His discomfort in an early dance sequence enshrines his insularity and his inability to actually interact with the world, intimating that his investment in seeing beyond that world is rooted in the disarray he finds in the world in the first place. His desire for new order only plunges him into chaos.

Over time, the pallid greys, jaundiced greens, and vaguely heartbroken pinks of everyday life that once refracted the triviality and malaise of the surface for him take on a more homely, refreshing aura in contrast to the increasing grotesque and lurid extra-sensory experiences known only to Xavier’s new eyes. We start to seek comfort in the plain-clothes realm. Sanity slides from a quest for the subcutaneous toward an appreciation of the surface; the everyday visuals that were once so trivial now attempt to diffuse the increasingly ornamented, narcissistic burden of Xavier’s psychotropic sight-beyond-sight that begins to hurt our eyes with its kaleidoscopic movement. That which provoked ecstasy now feels oppressively infernal; the battle for screen economy between the once-disreputable casualness of the surface and the ever-migratory delusions beneath them corporealizes the territorial fight between our human appreciation of the surface and our undying pangs of need to discover that which is, in reality, perched on the precipice between saving us and diving us into everlasting chaos.

At one point, Milland, granted the gift of seeing human illness in their organs, intones that a woman’s ailment is simply “tiredness and age and nothing”. The statement might as well apply to his increasingly forlorn, disheveled performance that undercuts the campy overtones of a script and curdles it into something nastier and grimier. His killer instinct for new possibility soon demonically lays itself to rest on a bed of hollow, unfruitful nothingness. We expect loopy inanity, and we get a weary melancholy.

Early on in X: The Man with the X Ray Eyes, Xavier exhales his one and only breath of fresh, insouciant life. In the hospital, surrounded by sterile and assumedly arid clinical trials and the stunted, straight-lined single-purpose equipment, he flickers with utilitarian charisma when he off-handedly uses a Bunsen burner to light a cigarette. The detail is unstressed, glimpsed almost as a periphery flutter that emerges from a cut-on-action and dissipates just as quickly. But it’s the sort of seemingly trivial detail that Corman proposes may be the life-stuff of everyday being. It’s not the kind of sight Xavier thinks he wants, but it’s a more delightful vision than he ever achieves again; the ability to see past the surface in a different way, to acknowledge the constructedness of objects around him and to imaginatively birth new purposes for them without denying their essential tactility, their place in the world. As time goes on, viewing everything only makes him invisible to these possibilities; objects become not repurposable but purposeless. The surface is no longer malleable and wonderful, but a distraction from a truth that, to Xavier, becomes nothing but a series of twitchy colors floating around with no meaning. The man, once able to divine new meaning out of objects, now can’t even acknowledge their presence in the first place.

Throughout the rest of the film, as he is suffocated and the farsight of glimpsing all kindles into the nearsight of losing the surfaces and tactility that define life to begin with, the girders of having to see everything and anything not only restrain his sight but sacrifice his capacity to flexibly find any new meaning at all in the world. Or at least, any meaning that doesn’t conform to his increasingly regulated mindset, a frontier that he hopes will acclimatize him to new truth but in actuality denies it. The possibility of new sight has become a penitentiary. His imagination, his real idiom for new possibility, is lost and moot. In opening himself up to new possibilities for the world, he has only curtailed his ability to ever connect to the world as it exists.

How good is it?: 4.5/5 (Quite, actually, joining the likes of last year’s Scream Blacula Scream for legitimately well-crafted cinema benighted by the swamp of B-cinema disregard)

Sure, but how “good” is it?: 2.5/5 (too nasty to actually elicit “so bad it’s good” chuckles, but they would be a shame anyway; this is cinema we should appreciate for its quality, not its accidental silliness)