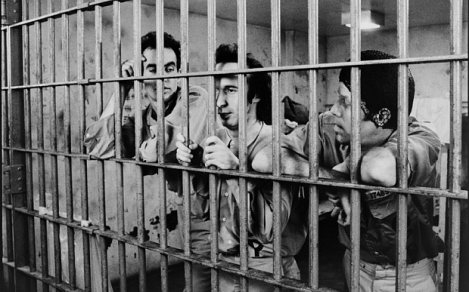 So, a great many of the films I wish to discuss for the Cannes Film Festival series are exceedingly difficult to come by, so we’ll be keeping things fluid around these parts. I plan on, hopefully, fulfilling the series by the end of May (that’s a review for every year of the festival until the present) but the order of the reviews is, as of this point, up in the air. I’ll be keeping things fresh, skipping as I see fit. It’s just the way it’s gonna be. Think of it as a way to keep us on our toes. Speaking of which, and speaking of today’s subject, not a better film exists for the subject of toes and keeping us on them like we’re dancing on hot coals …

Jim Jarmusch’s breakthrough, Down By Law, doesn’t give in. Murky noir, comedy of manners, and boozy interpersonal implosion masqueraded by a not-a-prison-escape all wrapped in the tendons of an adult fable about the momentary sinew of life, Down By Law not only defies expectation but makes a thesis statement out of defiance as a virtue. Present-mindedness, attuning to the fluctuations of experience as the only avoidance for the death throes of daily doldrums, becomes the only vaccination against the virus of stagnancy and ossified narrative structure. Call it The Night of the Hunter for the warped promiscuity of the adult mind.

Set in New Orleans and with a caliber of the Gothic gumbo that has clarified the mental imagination of that portion of the American landscape so entwined in the American mind, it would have been easy for writer-director Jarmusch to submerse himself fully in the slumber of swampy, molasses-thick milieu of Southern despondency. But Jarmusch’s vision isn’t quite so monomaniacally ghoulish. The opening camera tracks of New Orleans life don’t avoid the grime and grotto of this imaginative space, but they also acclimatizes us to differentiation in the flutters of life from the swamp to the inner city street to the stadium, depicting a city ensnared in its own distress even as Jarmusch’s jittery edits resist a pure solidification under this duress. Like the film, the cuts are always jumping, always unthethering themselves, always attuning themselves to new possibility and perspective even as some of the people in the frame remain stagnant.

How fitting that Jarmusch would a decade later, with Dead Man, and then a decade after that with Only Lovers Left Alive, take as his subject matter the curated museums of the imaginative American past, be it the Western or the vampiric call of Universal Horror and rusty but not rattled classic vinyl and material culture. Down By Law plays in similar imaginative spaces, drawing on sultry jazz for its spry, limber qualities as well as its sensual ones and applying Robert Muller’s beautifully monochromatic cinematography as a tipping point between a noirish nightmare of the John Huston school and a liquid, unkempt John Cassavetes throw-down, to name the filmmaker early Jarmusch most obviously changed guard for. Much like Jarmusch’s later films, Down By Law is intimately aware that it couldn’t exist without the vise grip of its own past.

But, if the film expects us to recall these various Americana influences, it ultimately transgresses them via liquifying them through supple gallows humor and a tone that defies the programmatic. The early portions introduce us to a duo of interlopers, pimp Jack (John Laurie) and DJ Zack (Tom Waits), wallowing around in a misery of ennui. A slice-of-life tale, we expect, but then happenstance conspires to arrest the two, and before we know it, we’re with them and murderer Roberto (Roberto Benigni), who find themselves ensnared in the same prison cell for what, presumably, shall shift the film into the realm of chamber piece. But Jarmusch resists again, vanishing us into an escape movie that isn’t.

Yet the gear shifts that don’t pull their punches are the ones that defy the purely narrative; for a film so emblazoned with the spirit of its own past, Jarmusch’s spit-fire, malleable attitude toward influence is uncontained by any one forebear. He quotes the obvious dozens of alternately chilly and hot-headed noirs and genre pic prison films alighting the underbelly of American cinema from the ’50s through the ’70s, but he even finds time to stop-over in the two most famous art-prison movies of all time (revealing Jarmusch’s peculiarly European variant of the American aesthetic).

Specifically, Jarmusch’s intercommunal tracks and pans, as well as his interest in external persona and theatrics as a viable, pliable prism for understanding the fluid human self reveal the Renoirian Grand Illusion as a cascading progenitor here. But that film’s diametric opposite, Bresson’s insular A Man Escaped – where physical space is an expression of the internal soul – isn’t far from view either (especially in the emphasis on doing rather than thinking and the surfeit of tickling pasts inscribed in the walls of the prison cell). Down By Law is cinematically literate then, but its attitude toward its inspirations is not to view them as chains weighing it down but gaseous ghosts floating above it, energizing it, embodying it for a moment only to be traded out improvisation-ally in a from-the-hip, run-and-gun, don’t-look-back (Pannebaker’s mitts are all over the piece too) film aware that the greatest way to pay homage to inspiration is to refuse to be destroyed by it.

Subversiveness abounds, from the way the black-and-white visual aesthetic feigns austerity and detachment but instead creates an existential funk around us, counterpoising the chilliness with a hothouse of steamy human movement always threatening for control of the screen, teetering the film on edge. The Tom Waits’ songs are similarly ambidextrous, bellowing, howling, and plunking like a soothsayer of the future, a siren beckoning the present, and a scribe of the past brandished as tempestuously as Neil Young’s vibrant, lacerating Weird West grunge caterwauls in Jarmusch’s later Dead Man. The multifaceted, slantwise tone of the Waits music is perfect for the material: melancholic but trippy, sordid but earnest and disconcertingly sweet, morose and macabre but flippant and fun. Tones don’t so much contrast as swirl around in a black hole of insouciant charisma.

No scene better sums up Jarmusch’s film than a static shot of the three men, the DJ and the pimp on either side of the murderer, lined up behind the bars of their cell – it’s the oldest trick in the German Expressionist book to divine bars out of thin air and shadow to coil around the human form, and we expect it from the film due to its steely black-and-white. Yet here, for the first time in the film where the bars are literalized, the three juggle a voluminously bouyant conversation, the murderer – the angel of death – categorically the liveliest among them.

Soon enough they’re prancing, chanting, playing, and ponying around where they had been prowling in the primordial muck of life (it’s a categorically Renoirian gesture of human theater as a portal to understanding our inner souls). Played by Benigni like a man unchained, learning emotion as he goes along (indeed, the vivacious present-tense nature of his performance is abetted by the fact that he was literally learning English as the film was being made), the Italian man bridges the two loners and their muddy trek through the past. He attunes them to a humanity of action, of the present, of the moment so that they can finally escape not only their physical prison but the world-weary passivity that had subsumed them throughout life.

But Down By Law is a work of formal escape, formal present-mindedness, rather than simply thematic freedom. Thus, the beginning of the narrative escape, cheekily, is denied us by the film in another peyote-tinged, beat-inflected jitter or record-skip that roughs up the smoothness of a narrative as old as American cinema, perceptually locking us in the present tense, making us pay attention to the temporal realm, even as the film is playing around in styles of the past. It’s a perfect embodiment of Jarmusch’s upturned Americana – like David Lynch without the sometimes goading sensationalism.

The style would flower more fully in Dead Man, a gnomic acid-Western with a grayscale morality and a makeshift, pantomimed vision of a limbo West where the dialectic between man and nature played out as a bristling monologue between an impassive, already-taxidermied corpse of a bear and a hysterical, delusional Robert Mitchum. That scene is a potent and provocative metaphor for the American imaginative past playing out as a one-sided jeremiad between the male ego and a falsely-conjured image of the past now represented as stagnant materiality. In Jarmusch’s vision, we embalm the past as object, often a film (it’s what consumer capitalism does best, after all), and then live out our present by recreating the facade of a continuing conversation with it that we definitionally can’t lose, because we control it – we make the films – and it can’t respond back.

Dead Man, of course, is really about how that vision of the past – that rigidity that defines our fictional imaginations and comforts us with conservative dreams like Westerns – controls us as well, weighing down on us until it’s all so much artifice and theater before our eyes (thus the film forces its characters to stand around with the cadence of a statue, as if being presentationally carted around to hit their beats on command and without freedom). Where Down By Law differs from Jarmusch’s later films is that it not only imbibes in this control, but proposes an out. Personified in Roberto – an absurdist injection of an Italian clown with a prodigious interest in Walt Whitman – and stylistically embodied in Jarmusch’s rambling circus, Down By Law imparts the wisdom of flux onto us. We expect low-slung Southern grits, and he gives us a gumbo with constantly reorganizing parts, the chewiness of alligator skin, and the nimble, cavorting quality of a crawdad. It’s an unquantifiable beast of a motion picture that revels in the unquantifiable quality of life, tracking mud through the limbo of two characters’ lives before introducing them to an inferno it chooses, through sheer force of will, to envision as paradise.