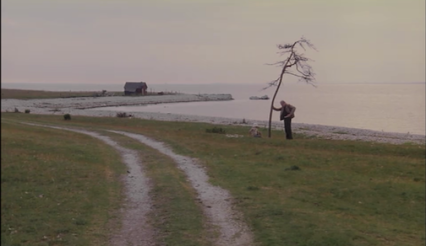 Andrei Tarkovsky’s final film is not his greatest work, but with the weight of his passing hanging over the piece, it emerges as something even more notable, even more trenchant. The Sacrifice remains a foremost reminder that the cinema’s most pressing, most exploratory wanderer left the world the way he would want to: without an answer, still wandering and exploring. For, unlike most of Tarkovsky’s contemporaries (excepting maybe Terrence Malick in America), the Russian poet’s films defy answers, riddles, destinations, or arrivals. They laugh in the face of finalitude, they eschew completeness, they stage a coup against the idea of conclusion because their very caliber as cinema is inextricably tied not to the arrival at knowledge, as every other film stresses, but to mechanisms of knowing and to the experience of feeling. For Tarkovsky, how we sense the world is the divining rod to what we sense.

Despite the voracious appetite with which scholars have devoured his films, writing about Tarkovsky remains a mystery, a chimera, a dare; he is one of the few, perhaps the only modern director who fundamentally cannot be boxed in or contained in even the most thoroughgoing, novel exegesis because his films denounce the idea of analysis in favor of the raw, the sensual, the radiantly sensory. Watching a Tarkovsky film isn’t a means to learning a set of data points, but a treatise on how learning functions. His canon is nothing short of a Rosetta Stone for the medium.

If the holiest of films are those where form and content are in perfect harmony, Tarkovsky’s films are works where content does not exist, where form is the content, so to speak. Characters amble about the screen in The Sacrifice, reductively viewed as a tale about a collection of people in a house in an unstated locale, a limbo or a premonition more than a real place. But the people, antithetically to modern cinema, are representative of nothing; Tarkovsky conspires to no preconceptions about how the world works, he relies on no outside knowledge of society or experience, but instead constructs his own. Tarkovsky’s cinema is cinema in the way that Faulkner’s writing is writing; not as a statement of fact or a mechanism but as a mission statement or an expression of existence, so inextricably tied to its medium that the thought of it existing in any other artform not only reduces its value but renders it unquantifiable and unimaginable.

The sonorous texture of The Sacrifice’s cinematography, courtesy of Ingmar Bergman’s partner-in-crime Sven Nykvist, embroiders the film with a hallowed-ground embrace that evokes the supreme evanescence of a dying man’s final words. Set during a birthday that will prove our foreground for the baleful coming end of the world, Tarkovsky’s film denies us the hothouse peril of a carnivalesque thriller and instead silently laments time by stalling its linear passage altogether, submersing us into a subfuscous stillness and sangfroid. It’s a doleful but not dismal twilight hour for the world backing Tarkovsky’s own nearly complete life. On one hand, Tarkovsky proposes that harmony arrives in not knowing what comes after the end, and on the other, he dourly doubts the pitiful humans on screen whose squabbles are like termites ignoring the elephant of sudden-onset apocalypse in the room. More than anything, Tarkovsky’s frail state during filming sees a filmmaker approaching his own apocalypse with a filmic cataclysm; there was no lame duck period for this filmic explorer.

Existential turmoil looms large over The Sacrifice, which perches itself on a tonal precipice that defies logic and complacency; scenes can encompass fidgety holocaust, Renoirian farce, and caterwauling, banshee-like cry into the night as the physical space around the characters unstitches itself before our very eyes. Tarkovsky prefaces the diegetic nuclear fallout with a potent, lurching unease that signals melancholy and perfidy even before any nominal desecration is afoot. The opening passages of the film are replete with an aural-visual dissonance that suggests a heretical cinema lying to us, mendaciously off-centering images without comparable audio or inviting us to hear aural specters – birds, religious hymns, human voices, mechanical warbles – that don’t conform to the visual diegesis we witness. The world doesn’t need the fallout then – it’s steadily, steadfastly undoing itself at a sensory level from the beginning.

Tarkovsky’s camera doesn’t walk through the screen; rather, it haunts the ethereal spaces, taunting us with an askew perspective of interpersonal conflict where the senses exist in consternated conflict. More obvious narrative ques of sensory overload and dissonance do reveal themselves for those who don’t look elsewhere: a man recites a jeremiad sitting against a treetrunk, trapping himself within his words, only to find that his mute son has disappeared from his vision. But the more telling instances dotting the landscape are purely formal; the house, for one, is a cornucopia of dashed expectations and discordant senselessness. We intimate secret desires and lusts as the characters subliminally pine for one another, but the failures in their communication, the gulf between their reality and their dreams, is sublimated to the film’s communication with us. Every image and sound is a dialectic with the audience’s capacity to grasp its fluctuating, undulating, fascinatingly ephemeral whispers of truth.

Specifically, as Tarkovsky glides around the house, characters walk in and out of the frame, speaking to individuals who disappear from view only when we aren’t hearing disembodied, incorporeal voices wash over the screen coming from outside bodies not privy to our visual imagination at the moment. The Sacrifice is a case study in cinematic semiotics, distorting and dissecting the barest notions of how people relate to one another, and how we interpret cinema. Discrete, disparate sensory experiences seem wholly and violently set against one another.

And in discombobulating the harmony of the senses, Tarkovsky teaches us to attune to our normative mechanisms of meaning-making and to not take them for granted. He imparts on us the awareness of our present as the blood of life, and a sense that life entails a composite of the positive sensory impulses as well as the negative. Late in the film, after a character restores life to the world, Tarkovsky gives us both the shimmering radiance of water and the tactile bruise of stubbing one’s knee. Life here involves the acknowledgment of the instances of human chaos, accident, squabble, and sensation that course through it. It’s not a surprise in Tarkovsky’s paean to embracing the world that the only man who embraces it enough to save it is seen as mad while everyone else continues to argue blithely among themselves, remaining oblivious to what is happening around them.

Which speaks to a molecular understanding of cinema as an experiential art form on Tarkovsky’s behalf, as well as a conspicuously controlled but never dictatorially subdued expression of how meaning is processed. It’s not only a cinema-first approach but a cinema-exclusive approach. Prepackaged chunks of meaning doesn’t sit atop a procession of edits to be discerned through dialogue, narrative, or totem-like visual ques and symbols that draw lines of connection to real world concepts outside of the film. Where Tarkovsky stands apart is the way that meaning is intimately injected into the very edits and shots themselves, inextricably entwined in the innards of the film; the “experience”, the disillusionment, the uneasiness of the floating, nebulous audio contradicting the stated intent of the languorous, delicate images is itself the value of the film. Knowledge, or information, is replaced with experiential perception and mechanisms of perceiving, which humbly denotes Tarkovsky’s elemental awareness that all films are subjective nomenclatures of lexicons for interpreting experience rather than harbingers of the real, classifiable world.

That world, that sense of the real, exists in the complete, the found, the objective, and the existent, while Tarkovsky’s films dare to leap off the precipice into the unknowable and the waiting-to-be-discovered. As a mausoleum to humanity’s hopes and dreams, it also stands as a sepulcher to the cinema of the old and, of course, a monument to the cinema of the new, a cinema that, thirty years later, nary a director has even attempted to envision in even their wildest dreams. The Sacrifice is the cinematic void, all the more tellingly so because it is aware that untold realms exist beyond it – with its endlessly subjective camera movements alive with not only incandescence but the humility to suggest that it is but one perception, one interpretation of existence. This humility stands as the towering achievement of Tarkovsky’s understanding of both cinema and the world.

This is filmmaking without a stable perspective, always rereading itself and distorting the notion of experiential feeling and sensory experience – how seeing and hearing disagree and disembody one another, while also forming truths more awestruck than either in the rare moments where they exist in heated harmony. It’s too tempting to discuss Tarkovsky in terms of the icy chill that persists over his work, but this is not the detached intellectualism of Kubrick at his most diagnostic and meticulous. While Kubrick’s films sometimes make the mistake of feeling that everything can be connected, understood, and explained away, Tarkovsky throws up his hands into the ether and accepts the senses around him, living for the present while ruminating on whether anything we can do as a species is truly living at all. It’s a contradiction, but contradictions are where cinema is most alive.

The trouble with most films, timid of feeling, is that they replace a life of the mind – a sensuous intermingling with the unknown of nature, a brave mental foraging for new perception in the unknown external realm conjoined to the internal through the faculties of the filmmaker – with cause-effect, if-then narrative formulations that speak to social issues at an intellectual rather than sensory level. They exist in a head-space, conceptually, at the level of events rather than perceptions and sensations; they have been codified to mean and program before the camera even laid eyes on the subject to be filmed. Rather than life emanating out of the tangible intangibles of earthly realm, the moral quilt-work of these films preclude any open space. They are mirages promising the secrets and answers of the universe but entirely unwilling to flow with the shape and temperature of human experience, to feel out the unearthly glow of interacting with an idea too unwound and too complicated to be completed by a single work of art. Unlike most cinema, The Sacrifice is held together by expressive empathy with the world, of pointing the material camera to discover an immaterial energy radiating out of nature and human contact. With no crude narrative formulations or “solutions” tying it down, a space of iridescent meaning unfurls across the frame, a pointillist collage where every inch of screen space emits an unsettled energy, like the whole film exhibits a low hum of perpetual feeling and energy unshackled by any specific mental framework. This is the platonic ideal of open cinema with no preconceptions about how the world functions, a cinema of humility rather than hubris, and among the most sincere films ever conjured into existence but that sculptor in time, Andrei Tarkovsky.