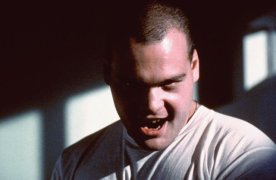 A review apropos of nothing in particular…

The resurgence of Full Metal Jacket in Stanley Kubrick’s inimitable oeuvre arises, perhaps necessarily, in similitude with society eschewing Kubrick more generally. As the cryptic, obstreperous director wanes, his forgotten films wax. With this shift, valuable discoveries abound in a film that was largely manhandled and left for the scrap heap upon its initial release. But just because a film leaves breadcrumbs for the picking doesn’t mean it is a full feast. Valuate Full Metal Jacket, cinematic minds ought to. But it should not be sacrosanct. A simple comparison to the films released on either side of it reveals Full Metal Jacket to be a wanting trough in between two peaks of modern Western cinema. Kubrick’s Full Metal Jacket is an incisive film, but hardly the singular competition-vanquishing achievement that many now proclaim it to be.

A surface-level pass overhead reveals that Full Metal Jacket lacks the byzantine, baleful malignancies of Kubrick’s prior work The Shining, still the apogee of his career, and that it fails to exert the elliptical, ethereal radiance of his dozen-years-later final film, Eyes Wide Shut. Frankly, Full Metal Jacket is the weakest of his mature films, largely because it is the most redolent of his already established aesthetic and the bluntest in its elucidation of systemic entropy. While the stylistic grandeur of Kubrick’s other films serves as a statement to boldface cinema and a tightly wrapped treatise primed for uncoiling new revelations on a per-minute basis, Full Metal Jacket’s enormity feels more mercenary than mercurial. It feels a little like the director is showing off, flexing his cinematic muscles like an impressively mounted, ultimately hollow dime-store weight lifter rather than imbibing in carefully curated, judicious exercise.
Case in point: although the introductory 45 minutes are often considered a Kubrickian tour-de-force, they’re heavy on pummeling and light on the nimble surreptitiousness that usually cohabitates with Kubrick-the-force-of-nature in his earlier films. Admittedly, the film’s defenders have an easy out: the prelude to the back two-thirds is supposed to be an exercise in cinematic dehumanization as ossified as anything Kubrick ever made, the de facto argument for and against the director depending on whether your hand raises for “dictatorial malcontent” or “cinematic savant”. Not a single scene in the early moments accomplishes any goal outside of Kubrick’s parochial expression of the military as corporate bureaucracy, and the mechanical, anti-fluid nature of the images is exceptionally effective as a beast that engulfs and devours the audience’s humanity. Sure, the right-angles are effectively astringent and the anti-individualist storytelling that tacitly wanders between characters rather than singling out any of them is a marvel in its own way. The depth-of-focus, suggesting the fundamental anonymity of military life by positioning dozens of men in the background of shots that ostensibly enter into the mind of one person alone, is notable as well, even if it is borrowed from decades of non-English filmmakers (Ozu, Renoir, De Sica) who mastered the trick well before Kubrick.

On its lonesome, however, the early segments of Full Metal Jacket are also aridly rote, sleek affairs that emphasize the bludgeon over the scalpel – they have very little to say about war that Kubrick and other filmmakers hadn’t already expressed more fully and with greater discipline, rather than simply punishment. Ironically, the errant messiness of the final two-thirds of the film – when it shifts from a war training camp to an impressionist collage of combat – is the very textural contrast the opening clause of the film requires to earn its galling torpor.

The body of Full Metal Jacket is hardly perfect, but watching Kubrick struggle to retain his militial order amidst the rambling deviousness of the screenplay is like a cinematic lexicon for understanding mental collapse. Filled with churlish consternation, the aimlessness of the film’s back portions – the very cause of almost all of the film’s castigation and censure over the years – is the bull-in-the-china-shop that gives Full Metal Jacket its capriciously entropic, fascinatingly self-conflicted personality. As the film unfolds, we find ourselves observing Kubrick setting himself up to fail, relying on camera angles that choke and suffocate the film while also enforcing a rambling, unordered narrative structure that drips off the screen, punching holes in the camera as it escapes Kubrick’s bid for autocracy over the film. It’s like the surfaces closing in on a target in a room when escape holes are already punched through the walls in the first place. Without a cohesive identity at a structural, architectural level, the film elevates into an expression of entropy and metronomy at war with one another; the film becomes an image, itself, of its broken characters, torn between brass order and antic chaos.

So it is a broken film, but not a waste per-se. Kubrick’s chilly, downcast serenity over the subject butts heads with the white-hot viciousness of the material – if the film is a test of sorts then, it is rigged against the director in a particularly daring way. It’s a film that draws and quarters itself and sits back to watch the flesh pulling apart. Calcification and gaseous incoherence entangle, and so do weakness and strength. Every moment that fails as traditional drama also buttresses the film’s scorched-self anti-energy. Ironically, the closest approximation in the Kubrick canon may be the self-sacrificing AI, the unfinished ugly stepchild of Kubrickian machination and Spielbergian innocence; neither film is a coherent object, but their almost willful failures are beguiling case studies in cinematic construction precisely because they reveal the fissures and bandages tentatively coagulating the chaos of filmmaking into a cinematic order in the first place.

Abstracted from experience, then, Full Metal Jacket is a bruised beauty of the highest order, even if it is an almost purely intellectual order. More troubling, however, is Kubrick’s flat-footed attempt to sand-off the structural discombobulation of the piece with comedy. The sarcasm and satire, for one, feel like Romans thrown to the Kubrickian-fan lions waiting for another Dr. Strangelove, a superior concoction of contradictory style and tone and more scorching than the overweening dialogue of Full Metal Jacket can manage even on its best legs. The ostensibly possessed camera pathways through the doleful conflict outmaneuver the script’s dialogue most handily, meaning that a screenplay that can be salvaged at a structural, scene-to-scene level often buckles within individual scenes. Meanwhile, the mournful cinematography fares better than the prickly dialogue, but it’s hardly as contemplative or as confessional as in Kubrick’s most incisive works, nor as wicked and cunning. It’s almost enough to redress the dialogue. Almost.

Full Metal Jacket is a ham-fisted effort, then, a fever dream salvaged only by its own willingness to unstitch itself and peruse the space outside of its own body for evidence of its failure. In the end, this flawed but essential film doesn’t seem to have much of a body left at all, but that’s because of its willingness to enter a collision-course with itself. In a world where most films are sanded-off and pat in their identities, a self-propagating fire calls for fixation as much as caution; it’s something to study, not to shirk.