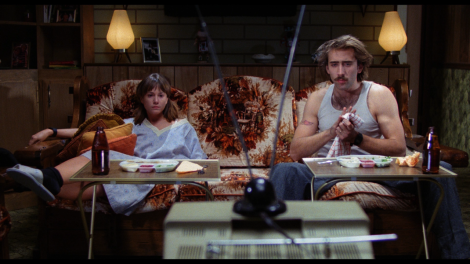 With the release of Hail, Caesar!, a look back on some of the Coens’ previous comedies is in order.

Had the Coen Brothers not entered into the directorial world with the sublimely unremitting, cold-blooded grit and sinew of the Southern blood hound Blood Simple, it would be an easy gesture to write their sophomore feature Raising Arizona off as a sloppy-seconds slump of easy-going Americana by an adolescent, nascent talent still waiting to fill in its own shoes. It is true that better things would await the world’s favorite two-headed director within a few short years; Raising Arizona has none of the snidely, combustible genre exegesis of Miller’s Crossing or the frenzied philosophizing of Barton Fink. In light of the hurtling digressions of the films surrounding it, Raising Arizona’s reputation as the red-headed step child of the pre-2000 Coen canon seems justified.

But within Raising Arizona’s spuriously arbitrary facade lies a raving-mad exercise in the hysteria of everyday life that both upends the harrowing spook-fest of their debut and proves a deceptive revitalization of that film’s inner core as a reflection of American madness. Admittedly, the tone of Arizona is as off-base from Blood Simple as the bounds of an art form might allow, but the fractured-mirror excess of warped Western iconography (both the cinematic and the geographic variations) remains as deliberate and pressing as ever in this, their most underrated film.

Certainly, the shambolic first third of Raising Arizona is arguably the highlight of their career; it is certainly the de facto highlight of editor Roderick Jaynes’, spitfiring material like he has two pairs of eyes and hands to cut and paste rather than the human species’ typical limit of one. Perhaps it is unfair then, but the discombobulated editing of the oddly impressionistic prologue finds the most delirious possible slantwise application of the malevolently tight editing of Blood Simple: in a potently demented, Hawksian screwball comedy. Hawksian, I say, but if the slippery rhythms of Carter Burwell’s persnickety score corroborate that influence, then the viscous underbelly of Nicolas Cage’s laconic narration swampily throbbing through the needlepoint intro like molasses is about as far removed from the conventions of the manic screwball comedy as filmically possible.

That Frankensteinian meeting of odds and ends is essential to the spirit of the film, though, with the gleeful onslaught of merciless repetition in the images disturbing the domesticity of the voices like a clan of devil worshipers in corn field. Cage, a dynamite actor in his early days, locates a stubborn temper here totally at odds with the fervent insanity of his later roles yet no less distressed. As criminal H.I. McDonnough who marries police officer Edwina played by an equally impressive, more pointed and precise Holly Hunter, he personifies the wry humanism in all Coen films, that sense of people in a mad world just trying to keep the gonzo, askew outside from getting to them.

Upon discovering that Edwina is infertile, the two steal one of the five quintuplets of furniture tycoon Nathan Arizona – content, in desperation, that he and his wife have four more similar pairs of vacant eyes – and the couple must confront the reality that trying to introduce domesticity into their fringe-dwelling life isn’t as easy as it looks. A certain laughter at despair necessarily functions, but it is no albatross around the directors’ necks; their film also exposes genuine compassion for everyday people turning to whatever mechanisms they can to conform to society’s weighted expectations of them (just take a look at the final montage, one of the most sparklingly humanist moments in American ’80s cinema). The formless, episodic narrative matched to the near-violence of the editing rhythms evokes the fleeting humanism of life passing by and days experienced in the periphery, whilst also cutting through the misguided perception that the Coens are misanthropes like an empathetic knife through poorly-informed critical butter.

Admittedly, you’d be hard-pressed to expose a Renoirian vision of provisional human decency in Raising Arizona – the enhanced reputations of the films around it are deserved. But the gallows, hellbroth absurdity of the film runs headfirst into the waiting wall of genuine human empathy lurking all throughout the film. It doesn’t bear the fruit of the adventurous formalism epitomized by the deathless No Country for Old Men two decades later, but little subcutaneous formalist ticks abound. Twinges of Joel’s days editing Sam Raimi’s work encircle the film in a demented scene where two of H.I.’s friend fly the prison coop (not to mention a few breathless camera movements borrowed from Raimi, with George Miller another obvious progenitor to this film’s cheeky American-Southwest-as-proverbial-Apocalypse texture). And each and every scene featuring the Jodorowskian presence and presentation of a villainous biker prefigures the waiting terror of Anton Chigurgh, the Coens’ greatest character, with as much malice and pandemonium strutting through a modern-day West that benefits from so much space to lose one’s mind in.

Elsewhere, cinematographer Barry Sonnenfeld, right before shipping off to direct his own blockbuster comedies, proves a real find rug-burning Western imagery, just as the Coens’ script fragments the American frontier-theory consciousness without necessarily condemning it. It’s more a film where the little delights percolate and bubble, rather than a tract or polemical where the gusto of the filmmaking bowls you over. But the resignation to the dustbins of cinematic history don’t suit this fine, feathered example of the Coens’ days in the blazing cinematic wilderness at all; it remains one of the finest modern applications of their Kafkaesque comedy as an expression of a world tilted on the wrong axis.