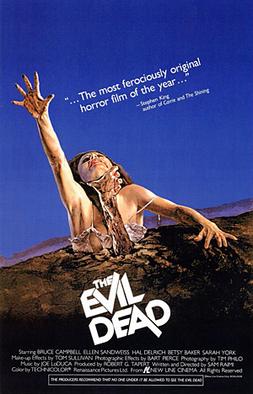 What with Ash vs. Evil Dead trouncing the television world, a review of the film that started it all is in order…

First things first, The Evil Dead is not Evil Dead II: Dead By Dawn, although it is infinitely tempting to compare the two. A comparison isn’t unfair; Evil Dead II practically invites the comparison, being a quasi-remake of Sam Raimi’s debut feature. By 1987, when he made Dead by Dawn with only one other film post-Evil Dead to his name, Sam Raimi was at a more confident place as a director. He had Stephen King’s nominal backing, and, whatever the questionable merits of that false poet, Stephen King was just about the king of the commercial horror world in 1987. With Evil Dead II, Raimi was primed for a daring, pugnacious deconstruction of the very limits of horror and comedy as emotionally tinged experiences. In 1981, when the original Evil Dead was released, he was a more humble independent director without anything to his name but a Michigan backwoods, a buddy with a noble chin and a subtle wink, and all the ingenuity a first timer raised on a steady diet of Italian giallo pics could muster.

Accordingly, we should treat The Evil Dead as the amateurish product it is, and be weary not to overstate its worth. It is no masterpiece, and it does not openly force a dialectic with cinematic genres as forcefully as its sequel would. Thankfully, considering The Evil Dead as an amateurish production also means steering full throttle into its strengths: the outsider-art, outlaw amateurishness of the production ensures that The Evil Dead is still shambolic cinema proudly standing up against the realist principle. It is thoroughly aggressive, gonzo, impulsive cinema fired from the hip, as deeply and dementedly provoked by warping human flesh as Freud himself was, yet also a pointed riposte to Freud in how the film threshes those bodily analytics through the disruptive cracked lens of the Looney Tunes. It is a film that would condemn the very words of milquetoast realism and common sense, if the film had been released into a world that knew the meaning of those words in the first place.

Watching it all these years later, it is shocking how The Evil Dead provided the raw girders for Raimi’s career to stand on; the pop-fueled haze of the first Spider-Man should pay penance to the rambunctious, vertiginous camera of The Evil Dead, and Spider-Man 2 directly quotes The Evil Dead in its horror-infused surgery smorgasbord. It is not for nothing that Raimi went sour with his most commercially successful franchise when he tried to modulate it to a glum post-Batman Begins world, sacrificing his earnest lunacy and pop-psychedelia in the process. His heart is in the adolescent world of comic books, and not the adult-infested regions of the graphic novel. Whether those comics were tales from the crypt, as in The Evil Dead, or mighty marvels, he always found a home.

But, you know, amateurishness. And we must confront the singular problem of The Evil Dead, where its giddy failures as conventional cinema slip from deliciously warped screw-the-rules filmmaking to uncomfortably incompetent filmmaking: the screenplay. Not only is the much-vaunted tree rape scene pitifully devoid of Raimi’s usual directorial wit, but it is representative of the film’s tendency to let exuberance sour into misogyny. More generally, the film’s five characters – if you don’t know the story, it saws down slasher tropes to the bone with five characters in a backwoods cabin being summarily stalked and turned into demons by an unseen, omnivorous maelstrom of a demonic force – are barely-written ciphers on paper, as rudimentarily sketched and haphazardly acted as any slasher characters in cinema history. Had Sam Raimi not directed the film, The Evil Dead surely would have been sucked hazardously into the twisting nether of slasher nothingness.

Yet, the fact is that Sam Raimi did direct it, and if The Evil Dead isn’t quite a one-man show, it is almost uniformly successful due to Sam Raimi’s incomparable genius. In terms of secondary figures, young Bruce Campbell brings a not-quite-ironic, not-quite-serious tilted line delivery style and fully committed sense of physical timing to the role that would make him a cult star, but the film’s secret weapon is Edna Ruth Paul. Accompanied by a young Joel Coen (yes, that young Joel Coen), her incongruous, slanted editing style deliberately disrupts the continuity of the film in the spirit of the best giallos, transforming the film’s sloppy narrative into a bold and transfixing rejection of narrative. With editing designed to befuddle and destroy, the film applies nightmare logic to construct narrative bones out of boisterously illogical parts. The narrative failure manifests as a malleable critique of continuity narrative.

Still, The Evil Dead is Sam Raimi’s show to the bone, with the director’s incomparably dizzy sidewinding carnival barker show out-classing any modern horror-show of slickly overproduced chills and taking horror back to the outskirts of the world where it belongs. Some of it is as simple as Raimi’s knack for unchaining his camera in homage to Dario Argento, but it doesn’t end there. The shot selection – diagonal monstrosities that slice through you like a weaponized femur bone, upside images that hang you like a noose – is uncommonly disconcerting and disquieting at a cinematic architectural level.

The cabin – a location that is never granted the vocal safety of continuous space in the film – remains an ominous, unknown force, a tactile house of horrors that nonetheless feels positively unreal in its amalgamation of grandiloquent Gothic dread and scruffy DIY spareness. Despite its unassuming nature, every shot is dedicated to ensuring we never understand the location as a real place, a physical entity in our world; it feels positively unholy. Call it the summer sauna of H.H. Holmes, or the winter getaway of Aleister Crowley. We are treading on, and invading, unsafe ground with every camera movement. Raimi’s gruesome and ghoulish cinema of unrestrained self-exploration ensures that we stay that way, warts and all. He would evolve as a filmmaker, by all means, but The Evil Dead is a dark prayer, a twisted, unmuzzled paean, for the primordial beginnings of us all, an ode to the cinema of flesh and bone.