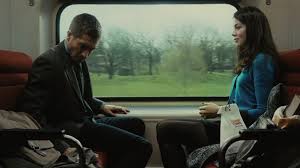 There’s really a lot going on in Source Code, no small curiousity in light of Jones’ previous feature, the introspective, nearly impressionist one-man-show sci-fi of Moon, which was about as slow and delightfully spare a film as you could imagine in the modern era. While Moon was wonderfully confident, Source Code gives off the appearance of something struggling to overwhelm with pummeling breadth and complication at the expense of depth. Without spoiling much, we have a military man (Jake Gyllenhaal) waking up a different person on a train traveling from the suburbs of Chicago into the city. Caught in the grip of coming to terms with his new identity, the train blows up. He wakes up again, now his old self, albeit strapped in to some variant of military device, and he is told by a pair of high-ranking officials that he will have to repeat the exercise, given eight minutes a time, until he finds the location of the bomb and identity of the bomber. The bomb having actually gone off that morning, our hero’s mind had been transplanted into the brainwaves of a teacher that was on the train to solve the mystery and prevent the bomber from deploying any further weapons. How’s that for a high enough concept for you?

High-concept is always a questionable affair, with most films buckling under the weight of the premise and wielding that idea less as grounds for a survivable feature film than as a cop-out for actually creating a narrative and genuine characters. On the surface, Source Code compounds this problem by trying to be too much movie for it to handle. We never let up, and the movie is constantly adding to the rush. We move between the train and the Source Code project room, the tones of each section being markedly different, and we skip back and forth so much it ought to induce whiplash. On top of this, we have ramblings upon ramblings going on in the film’s head, alluding to and eventually openly stating metaphysical questions and hinting at ethical themes a mile wide in underdeveloped but admirable ways, and this is all in addition to the unimpeachable basic thriller mechanics of it all. There are hints of romance, and the package eventually induces a certain quality of human parable about the soul persevering over all that would do Rod Serling proud for being sweet and a tad overly saccharine while stopping just right at the moment before it becomes truly cloying.

All of this should come crumbling down post set-up, but somehow, and I think that somehow has something to do with our old friend “honest-to-god genuine filmmaking”, it never does. Jones has a deft hand, but he isn’t the sort of egomaniac auteur many new talents aspire to be. He likes to bolster up his confidence by surrounding himself with talents far and wide, assembling a sort of crack team of sharp, focused movie-making delights that never insist on themselves stylistically but quietly serve and add pulse to a tale that sounds a bit daft on paper. Naturally, as is true with any barn-burning thriller, the editing has to be top-notch, and Jones has his man on the reel with the indifferently great editor Paul Hirsch keeping things ever-rolling down the celluloid stream from beginning to sugary end. Source Code doesn’t really have a lot on the mind, even though it thinks it does, and it is to the credit of the filmmaking team that it moves so briskly and unobtrusively so that we never really stop to question all the nonsense going on behind the surface.

This is especially true during the film’s always-present but seldom-obvious exposition dumps, and the sheer rush of the film. Its skill in couching discussion and metaphysics in action and reaction, does wonders for hiding how dense the whole thing is. What we end up with is something that really ought to be cumbersome and drag interminably but is assembled with such a crisp level of skill and concision that the necessary complication of the film only occasionally rears its ugly head. Thankfully, for this sort of entertainment, what matters is less “does it hold up in retrospect” than “how does it feel in the moment”. And as an admittedly transitive experiential film rooted in watching, it’s a fairly satisfying series of moments, never talking down to us and always understanding its own limits. After all, entertainment is less about being smart than in convincing us it is smart for the time being, and Jones proves fully capable of it here.

Another small pleasure of the film: Jones never quite cheats, even when the film does its worst to make us think he does. He’s savvy enough to know we all expect a twist, for instance, and so he gives it to us much earlier than we expect so that it both surprises and has a little extra time to sink in and become part of the thematic texture of the film. It’s allowed to shape the narrative and the characters rather than just screwing us over at the end like a sick accompaniment to a better idea.

There’s also a slurry of solid performances to boot, and they’re not even reserved for the main roles (Gyllenhaal and co-star Michelle Monaghan are both plenty solid on the train though). Vera Farmiga adds an almost ungodly amount of complication and depth to her role as the person sworn to brief our hero every time he returns to the military complex, and the always-great Jeffrey Wright carves out the wonderful sort of ticks-and-idiosyncrasies loony scientist performance that he would later bring to The Hunger Games. They’re all so busy selling a questionable product on paper that it’s kind of lightly amazing at points. Which really captures the whole thing in a nutshell, actually. It’s a film that probably shouldn’t work on paper and feels like a rehash of so many other endlessly convoluted Christopher Nolan affairs matched to a turn of the century action-masquerading-as-intelligent-sci-fi schlock piece. But on celluloid, what do you know, it crackles from beginning until damn near the end. Then, isn’t that what cinema is ultimately for? Taking something leaden and tedious on paper and enlivening it with craft and conviction and just enough human passion that it all comes together in spite of itself. I’d rather have Jones loose in the art-house sci-fi realm any day of the week, but if pop fiction is the order of the day, I for one am glad he is around to do it justice.