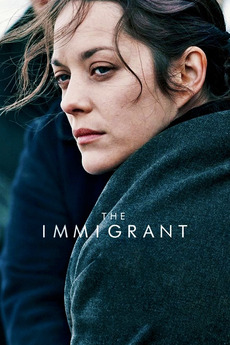 James Gray’s 2013 melodrama The Immigrant is not much of a story, but then, the same can be said of so many of the very best films ever made. How many of the classically-ornamented melodramas The Immigrant so obviously recalls boil down to one or two now-cliches (and tropes that were, rest assured, cliches in the 1940s as well) hammered home with worldly, elegant filmmaking? Many, quite a bit more than we may think, but here, as it is true there, the factor so often missing from plot summary reviews is that a plot summary is not a film, and that magisterial filmmaking makes a film, not its plot outline. We do not need another story about a prostitute with a heart, one of the most well-worn tropes in film history (and a sexist one, for it implies that a normal prostitute does not have a heart). But we have one, and if it isn’t a magisterial work of storytelling, its solid, and that, in the end, is all that matters.

Certainly, if we’re talking solid craftsmanship, the cinematography by Darius Khondji is sharp, pointedly messy, and suffused in an alternately Romantic and world-weary golden-yellow hue. It’s not revolutionary, per-se, but its extremely effective for the drained classicism of this film which ably recalls not only the time it was made but the mid ’70s spirit of recalling this particularly grimy period of the American memory (the yellow hues undoubtedly have the effect of distancing the film off in the past, giving it a certain mythic form of dirtiness, and capturing the spirit not so much of the past as of the films made in the past).

Generally, it’s solid filmmaking, finding the spirit of the otherworldly, wooly wild that was the strange, uncomfortable, rickety world of American city life during this cramped, unsure time period, and Kondji and Gray don’t go the obvious route of dour realism to capture this essence. Instead, they focus on a misty sense of ravaged beauty, an alien grandeur that isn’t so much lovely as beaten-down and savage, finding dirt and crumpled, jagged, messily packed spaces less out of the real world than harsh nightmares. Gray’s work is right there, even if it only turns luminous in one scene: a police beat-down in a tunnel, rendered like the depths of hell in a battle of pure blackness and galvanized, piercing golden light both saving us from the dark and blinding us further.

Thankfully, Gray follows suit with this backward-looking spirit by resorting primarily to some particularly well suited visual storytelling, finding moments in the background details that convey the characters and narrative more fully than the formal script ever could. The way in which a major character’s profession is revealed but never explicitly stated early on is particularly satisfying. The simple act of him saying hello to an unknown female and discussing money in a vague sense, matched to the wide space in between them to suggest that he doesn’t emotionally care about her in a personal sense outside of her capacity to earn for him, tells all.

The only truly transfixing element of Gray’s film, however, is Marion Cotillard, giving what may yet be her greatest performance in a work that studiously recalls the mixture of naïve and knowing so common to female characters in films from this time. The story of Ewa Cybulska, an immigrant woman fresh off the boat in New York from Poland, forced to prostitute herself as the only means of money she has to save her sister from deportation and sickness, is painstaking and affecting almost entirely because of Cotillard. Certainly, it is a performance entirely indebted to the powerhouse female roles of the era, finding in her awe-struck eyes the beauty and raw, even alien passion of Louise Brooks in GW Pabst’s Pandora’s Box, and telling everything of her character in simple, pinpoint gestures of the face. It’s a powerhouse performance, downright brilliant when it needs to be, and generally something great when it doesn’t need to be. It’s fitting that Gray privileges her mightily in shots, granting her plenty of close-ups to allow her eyes to fill the frame with fear and wonder.

His visual eye is also, perhaps, a tacit reflection that the other performers in the film, the men, fare much less well. Phoenix is a particular disappoint, trying hard to retain the artifice so lovely in so many films from this period but coming up a tad stuffily over-baked, and Renner isn’t any better. Admittedly Renner isn’t afforded much to do, while Phoenix has an honest-to-god genuine character, equal parts feigned concern, a genuine belief in his own paternalist helping hand, and a raw explosive passion lying in wait underneath a timid, superficial exterior. On a good day, Phoenix is the best working American actor today, so at least the pass is well-earned, but his style doesn’t work well for this grandiose melodrama and comes off as unnecessarily broad and effortful.

In the final analysis, The Immigrant works in exactly the way so many films from the era it depicts thrived: as a bald-faced manipulative melodrama telling a grand old tale of classically hard-edged drama. It does not redefine the world, or reveal any mystifying secrets about the state of human nature. It isn’t an intellectually satisfying work about gender constructs or about the state of a patriarchal society ever crushing good-hearted women, but it is an emotionally satisfying one. It doesn’t have anything to say about classical film or gender or masculine society, and it doesn’t properly “dissect” much of anything sociologically (it misses a notable opportunity to tackle the intersection of a more freewheeling form of early modern capitalism and gender oppression, even if it occasionally makes gestures to this effect). At best, it reminds us that prisoners of society are so often informal, and that “good” men in power are often simply the lesser of two evils, legitimizing themselves as “good” only because they use their privileged oppression in slightly more generous, insidious, ways than others who resort to more open corporeal violence. Yet if the themes are well-worn, the film tells a timeless story well, and it seems aware enough of its timelessly told stature. Sometimes that, and one absolutely devastating performance, is all it takes.