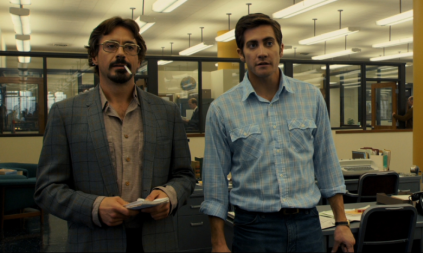 Doom-and-gloom maestro David Fincher has taken the 2000s and 2010s as his time to find respect, and as we all know, that is one of the worst things for a filmmaker to do. Mainstream success is one of the surest trains to cinematic acquiescence, and there ain’t nothing like acquiescence to numb the lifeblood of cinematic passion. Sure, 2008’s The Curious Case of Benjamin Button was his only overtly Oscarbaity film, and he did follow it up with his second best work, 2010’s The Social Network. But recent years have seen him look back to his lurid earlier days with nostalgia and a drive to recreate his darker and more nihilistic earlier efforts, and his efforts have proven one thing: slick has replaced sick, and Fincher’s desire to find commercial success has smothered any breathing room for his pitch-black cinematic treats to truly submerse themselves in operatic melancholy and deranged lunacies.

The results haven’t been less than good, but the magic of the hungry, go-for-broke Se7en, produced on the fringes in a special place of not-quite-social-acceptance, have given way to a corporate variant on midnight cinema, an overly safe interpretation of something that absolutely should be nowhere within striking distance of safety. The Middlebrows want to get dark without actually going to a dangerous place, to drive to the edge without going over, and to witness human wrath and envy from the safety of their home, and Fincher has made the mistake of obliging them.

Fascinatingly however, Fincher’s first attempt at melding the dirty and the squeaky clean not only worked, but led to his greatest film, a lightning-in-a-bottle work of crime fiction that dissects with clinical fluidity the entire idea of crime fiction, and thus subtly indicts everything Fincher’s works have stood for. The ’90s and early 2000s saw Fincher growing up, but after 2002 he took a nice long break to recollect on his adulthood and look back on his youth not with a lame desire to recreate past success (as we’ve seen recently), but with frustration and worry, with a need and a thirst to flip his entire youthful canon on its head and to take all that had been naïve and boyishly nihilistic about Se7en and Fight Club and gut it from the inside out

The film he produced, Zodiac, is a disturbed, strenuous film that seems to sweat at the seams of its tireless search for justice in the face of a nihilist world, and it intentionally looks back on all that was “hip” about Fincher’s previous films and finds them in a difficult place, emphasizing their unendingly mundane and suffocatingly frigid qualities to create something that not only feels like a lively bit of a cinema, but a directorial self-critique of the highest order. He’d gone clean, but he’d rubbed the edges off until they became stifling and fitted that stifling quality to the needs of his story. Here, he doesn’t try to hide the too-clean slant on trash he would soon exhibit in The Girl with the Dragon Tattoo and Gone Girl – he accentuates the slow lethargy and the lack of kinetic energy at the heart of the film, scrubbing away the lurid thrills not to the point of safety but to the point of willful difficulty. This is not an attempt to create lurid thrills from the calculated throne of respectability, but to be honest about the calculation, to center it, and to go as far with it as possible. It is Fincher swinging as far away from his roots as humanly possible. It was in his later period attempt to swing back to the middle, to have it both ways, that he went awry.

While his other films were obviously the work of a music video director, Zodiac is, essentially, an art-house film with a big budget. And unlike Fincher’s other films, instead of passion and action, it emphasizes inaction and hypnotically chilly dreamlike cinematography (by Harris Savides) that contrasts rather explicitly with the Fincher’s previous nightmare-like excursions. One could say the film, visually, is antiseptic, and that is precisely to its benefit – even the murders are cold and detached, giving us nothing to grasp on to in our quest to feel safe by letting us know the movie wants us to be a part of it. We are left cold and alone.

As are the film’s characters. For, ultimately, Zodiac is less about the identity of a killer than the personalities of the men who devote years of their lives to finding him to no avail. It opens up as the story of three San Fransiscans, Robert Graysmith (Jake Gyllenhaal), Dave Toschi (Mark Ruffalo), and Paul Avery (Robert Downey Jr), on a years-long hunt for the identity of the Zodiac Killer, then terrorizing the city less with a multitude of specific murders than the ever-present thought of unkempt murder left hanging in the air and pushing down on the city like a foggy, moist decay. But the killer is presented as a myth, an enigma, the kind to be puzzled around and never understood. The film gives us ideas, but we’re also painfully aware that the clues the detectives have are predicated on their desperate desire to grasp onto whatever slim straws remain after years of flailing around aimlessly for something to hold on to. Eventually one key suspect emerges, but the suspicion is as much a product of the desire to find someone to be the killer as it is on any evidence. Like another 2000s masterpiece, Memories of Murder, Zodiac is ultimately a film about the inability to identify evil and the hopelessness of the quest to do so.

To this extent, Fincher uncharacteristically emphasizes long, unbroken takes that capture the passage of relentless time and favor tedium over event – the film is long, and it takes pains to emphasize just how long it is. Yet unlike so many films with long takes, it never shows off its bravura filmmaking, for even this would give a viewer something easy to grasp on to. Stylistic flourishes are painfully rare – these men, all caught up in the doldrums of their jobs, have no time or care for style anymore. It is not, unlike Fincher’s other films, interested in being a breathless rush to the head – Fincher wants us to feel the years and the anguish that comes with them. Even more damningly, he wants us to feel what happens when anguish turns to malaise and one man becomes less invested in capturing the killer for justice than in his own abstract concept of personal closure.

There’s a lovely reversal late in the film that, for me, summaries everything that is chilly, Kubrickian, and brilliant in Zodiac. Toward the end of the film, our primary detective is almost certain of a suspect, Fincher’s camera capturing him stalking the guy through the same sedate horror imagery Fincher used earlier in the film. The only difference: there, the stalker was the killer, and here he’s the detective. But lest you worry: Zodiac astoundingly dodges the broadest, roundest, shiniest bullet in the world and somehow doesn’t turn the whole damn film into one of those “men going so far into the mind of a killer they become killers themselves” films all so popular today, and for this, more than anything, I have to give Fincher credit. It would have been the easiest thing in the world to go to this form of catharsis (for reference, Memories of Murder avoided it by turning the whole film into a dry, grotesque comedy).

Fincher, however, isn’t here to force us into the detective’s now deranged mind as he prepares for the kill. What he captures is far more subversive, and far more rewarding in this day and age of no-real-Kubricks: that the detective may find the killer and do nothing, for, with the passage of time, any social relevance to the killings is washed away. The detective isn’t vindictive; he is tired. This, more than anything, curdles the film into a lumbering, slumbering three hour punch to the gut that we can’t even comprehend until we stop to notice the bruise. It’s a steadily opening flesh wound of a film, a punishment that will never go away, taking Fincher’s mechanical, ruthlessly chilly aesthetic to cryptic, sinister new heights of intellectual detachment. It is uncommonly rewarding, a full-scale assault that turns monomaniacal method into malevolent madness.