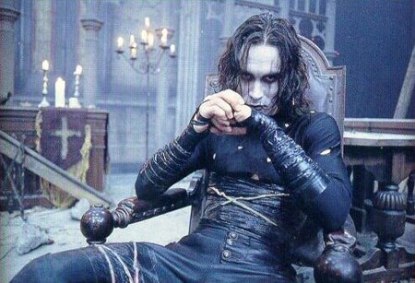 Jurassic Park saw classic ’80s blockbuster entertainment give way to the even sheenier, crisper branch of corporate ’90s filmmaking (very similar to ’80s blockbuster filmmaking, but much more interested in pushing the intersection of destruction and technology to its limits). For this reason, we find ourselves at a particularly strange place as we float on by 1993 and into the dark depths of the mid-90s. Cinema was only growing more indulgent, but the strain of American indies that had given light to the darkness of 80’s dramatic cinema was now entering its brightest stage of popularity and ubiquity. With corporate genre tentpoles and the distinctly dirtier world of ’90s indie filmmaking rattling around in a sort of cesspool, the two streams couldn’t but be crossed sooner or later.

It is with this that we arrive at 1994’s The Crow, an unlikely candidate for a ’90s blockbuster, but an important cult film nonetheless and a work which reveals the presence of a particular strain of ’90s filmmaking for all to see: the intersection of indie style/indie awareness of film history with the monetary aspirations of a blockbuster and the general desire to be things like “entertaining and actiony” to teenage males. If anyone needs more evidence as to this film’s peculiar placement in film history: it was released by Miramax films, the independent cinema distribution studio operated by the Weinsteins, right at the cusp of their becoming the film distribution company du jour throughout the back half of the ’90s. Indie cinema was being re-purposed into something corporate, and danger was assimilating into safety.

The Crow fits in to this  period for more diegetic reasons too, making the behind-the-scenes corporate stuff of the film, its relation to the ascension of Miramax as a gluttonous indie behemoth, background gossip at best. The fact is the film speaks for itself, being one of the first truly “popular” releases in one of the absolute “it” genres of the mid-to-late ’90s: the dark-hearted noir excavation matched in its indie-fried pastiche of cinema’s past only by its dripping desire to be “cool” and “edgy”, to be popular among a certain kindred collection of social outcasts and utilize its “The Cure meets Alice in Chains” aesthetic to have its cake and eat it too. It wanted to stick it to the hypothetical corporate man that so dominated the cinema of the mid-90s, but to get his attention to.

It is for this reason I choose to end the ’80s with The Crow, for, of all things, it is the first film in this ’80s series that genuinely could not exist in the same manner in any other time period except the 1990s. Everything from the comic book urban decay (different from the more observational and less mythic urban decay of the 1980s) to the post-Burton pseudo-expressionism meant to capture the after-effect of a nightmare, to the film’s rather explicit and unmedicated case of the dark and drearies, to the Gothic-gone-punk tone of the whole film, couldn’t have come to fruition in the opulence and shininess of the 1980s. Yes, there are tones of the ’90s in Point Break, Batman Returns, and even Jurassic Park (those jeans, huh?). But all of those films, with only minor swaps, could have retained their core visual and aural sense, and done just as well for themselves, at the tail end of the 1980s.

The big difference between The Crow and the populist genre fare of the 1980s: the glossy plastic high had keeled over into something more anxious and gloomily dejected and crestfallen. If the early 1990s were the the 1980s waking up and finding  itself in a back alley of a particularly grungy, seedy part of its own nightmares, The Crow is exhibit A. This sort of seediness was awash in the 80’s hangover that was the early parts of the ’90s, before eventually giving way to something more glib and over-polished as the latter part of the decade gave way to the 2000s. The Crow sees this transition in full force, and by existing on the cusp of both it attains a certain fascination no film on either side could have achieved. After all, is there anything more ’90s than corporations appropriating genre film styles and pressing and packaging them so they are just so off-kilter to remain invested and interesting without ever truly being all that dangerous or abnormal. The Crow exists right at the heart of this shift, repositioning hard-noir as the Coens had done twice before with Blood Simple and Miller’s Crossing for a less heady, more visceral youth. Only here we find the sucking noise of a corporation figuring out how to market this style as a big mainstream success rather than an art-house flick. The Crow isn’t really Miller’s Crossing meets  Point Break with a dash of Batman Returns’ screwy style thrown in for bite, but the DNA of the trends which epitomized all these counteracting early 90’s films can be found deep within The Crow’s dark heart, galvanized with just enough grunge music to make you absolutely certain of the early ’90s, if for some reason you weren’t already convinced.

It is at this point that we return to Batman Returns. Make no mistake, The Crow is very much a post-Burton effort – I’d go so far as to say it could not exist without his success, never more popular or artistically satisfying than during the five year span of 1990-1994 when the ’90s was still figuring itself out. This film’s cityscape is very much the expressionist, contorted, angular, harsh nightmare of that particular director’s succulent, ripe Batman films. Yet what it lacks is the opulence that defined the ’80s and which Burton had re-cast in a more mythic light to resemble an in-egalitarian nightmare out-of-time, equal parts ’20s Art Deco,  1980s pop-grandeur, and something more timelessly Gothic. Instead, Director Alex Proyas, who would go on to do more with the retro-noir aesthetic in the more artistically ambitious Dark City,  brings us something very much inspired by the early ’90s: feedback-heavy grunge, urban cynicism, and the smoky-sax noir of the erotic, sensual thriller genre so hilariously of the early 1990s one can’t but stand up and cheer a little at its go-for-broke ambition and complete lack of good taste.

And noirish the film undeniably is, undoubtedly submerging itself in the arcane decomposition of urban life, creating a decidedly plastered on, pointedly empty cityscape that justifiably looks more like a soundstage than a city yet still conveys the essence of a rock ‘n’ roll nightmare better than any more realist set design. This gnarled up, grungy goth-rock aesthetic descends to the level of core narrative to. Within, a man, Eric Draven (Brandon Lee) awakes as a walking ghost a year after he and his girlfriend Shelley were murdered by four criminal underlings. Draven, accompanied by a seemingly life-giving crow who remains at a distance, seeks revenge on them while announcing himself as a sort of avenging angel for the city itself.

Director Alex Proyas, making his feature film debut, undoubtedly understands mood and atmosphere, and he wrings life and pathos out of an underpopulated cityscape the likes of which no one could survive. He boasts an undeniable visual sense, one that would go on to prove thematically and intellectually fruitful in Dark City before he went awry with commercial success. The Crow is animated, tireless, and eager, if not quite fully-formed, and it’s clearly enjoying itself like few other films. It’s ardent, fiery visual filmmaking ready to collide with your senses and take no prisoners, announcing itself to the world with a caterwauling wail and delighted to do so.

Brandon Lee also proves himself a talent in a role that could have signaled a solid career in major motion pictures, had tragedy not intervened. He’s snarky and caustic without ever losing his humanist core, nimble and loopy in the way that action movies often require. But there’s a difference: this would-be jokester imbues the temper and the costume with vigor and melancholy. He captures in twitches of the eye and his fluttery showman’s sense of scale a diabolical ghost of a character filled with rage and torment, channeling his crooked, warped lost soul’s thirst for vengeance into something passionate without ever losing sight of the fundamental fact that Draven is too an agent of this harsh society. He’s an alarming figure struggling to maintain any sense of humanity amid his own personal monomaniacal drive for vengeance (if anything in the film pushes back against its fundamentally fascist, pro-vigilante core, it is he).  I don’t much know he could have been some sort of thespian for the ages, but it’s a nicely modulated, invested, caring performance that bridges naughty and nice with ease and usually balances itself in the best place, right on the knife’s edge between the two.

The Crow humanist aspirations are less successful than its cold-hearted bid for vengeance (scenes featuring a young girl, a past friend of Eric’s, in particular struggle to stay on the right side of the heart-warming/cloyingly sentimental divide, and end up feeling like a waxworks show lifted from another movie). There’s also the fact that it’s essentially completely straight-faced about its grubby, glorified vigilantism (in this regard, at least, it’s the best Punisher movie ever made, but a wholly unjustifiable moral work for the same reason). Important scenes misfire (such as an awkwardly spliced-in bit where children trick-or-treating – why they would be trick-or-treating when Devil’s Night in this city involves all kinds of nebulous murder and mayhem is never addressed – pass by Eric and “inspire” him to continue on). But for everything that misses, there’s a lovely grandstanding bit of gloom like the cut from Lee above a giant fire-lit crow, doused in hard blacks and reds, to an archly grey-and-brown gravestone in the muddy daylight. It also, thankfully, never goes very far down the “he’s an avenging angel for the whole city” angle that would turn the film away from its abrasive, vitriolic directness. If The Crow sees the cinema world a bit surface-level in its darkness, it is not nearly the hellhole of superficial, safe, corporatized noir its many successors would become. Perhaps because it exists at the cuff of this trend, where we can only see the loose edges of big money ready to grip its hands around the film’s throat, it seems forever twitching its muscles in defiance and noir-resurrection. It feels exciting while its many followers quickly grew rote and stale, but that is a conversation for another time.