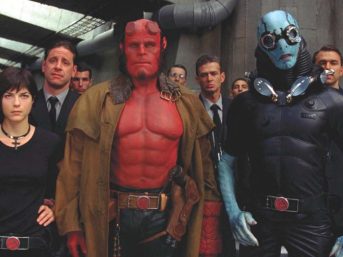 If, as I am increasingly inclined to believe, every Guillermo del Toro film is a “Guillermo del Toro idea delivery device”, Hellboy 2 is right up there with his best works. This is to say, if a Guillermo del Toro film is all about the Guillermo del Toro visuals he can imagine for us and transfer to the screen, which is not necessarily the case but has some value for his highly and pointedly surface-level films, then Hellboy 2 is a hell of a film. It’s weighty yet zippy, filled with consequence yet light on its feet, it’s buttoned-up in all manner of cozy, boisterous lights and sounds, and it has a dreamer’s streak a mile wide. Many blockbusters attempt to find a center in their visuals, some of which succeed and many of which crash under their own superficiality. The visual splendor on display in Hellboy 2, however,  exists on another level – its images do not merely heal the eye, but they achieve genuinely transcendent emotional heft all their own.

The first Hellboy was a bit of a missed opportunity. Ron Perlman was superb as the no-nonsense titular character, and the film was funny in a low-key, sprightly way, but whenever it made an attempt to tell a story – which was too often – it was muddled and inconclusive. Virtually every character other than Hellboy himself was underdeveloped, and the film always seemed to stop short of the imaginative heights it was hopeful to achieve. Del Toro’s heart was in the right place, but the pressure, or production push-back, for his first big del Toro blockbuster kept things too close to the mundane side of the fence, and too invested in the film’s relatively tepid, over-explained screenplay (exposition being the mark of a movie struggling to make good on its imaginative ideas without the courage of its convictions). It was on the knife-edge between conventional, everyday blockbuster and visually splendorous off-kilter del Toro fantasy, and the mix was as often messy as it was effective.

The sequel, in comparison, is much more assured in virtually every way. It still maintains some of the trappings of being a Hollywood film, but the resplendent imagination and quirkiness one  associates with Guillermo del Toro, who has directed the likes of The Devil’s Backbone and Pan’s Labyrinth, has seeped through the seams to create a much more fully-rounded, direct slice of everyday fantasy. Curiously, it is both more tightly-packed with imagination and arcane energy and far more streamlined, efficient, and straight-forward, giving it a nimble fire lost to the script contrivances and mundane dialogue of its predecessor. And because it’s much more indebted to del Toro’s left-field weirdness, when it does become … indulgent … it comes off less confused and more deliriously kitschy and fascinatingly rough-around-the-edges.

Ron Perlman is back as Hellboy who, now more comfortable with his devil-born origins and in a much more stable relationship with Liz Sherman (Selma Blair), still knows no respite from the daily dialectic of helping out humans (who know very little of him and seem to think him a menace) and maintaining his own identity. Today’s magically beastly challenge: the after-effects of a long-broken deal between humans and magical beings to remain separate. Human apathy to the deal has convinced Prince Nuada (Luke Goss), an elf prince, to retrieve the three pieces of a crown which could, if combined, release the dreaded Golden Army and punish the human race for its inability to uphold the bargain. He takes one piece from his father, the king of the elves, and retrieves another (the one piece that went to the humans) from an auction-house (resorting to violence yet again, this time in the form of some lovingly manic, macabre tooth fairies). But his sister, Princess Nuala, escapes with the third and seeks the help of the Bureau for Paranormal Research and Defense. Which is, naturally,  where Hellboy and friends come in.

The second Hellboy movie is a visual treat; as expected for a summer movie, effects are prominent throughout, but there’s a certain physicality and pathos to them here lacking in most summer fare. It’s no secret Guillermo del Toro has a mind for creative creature design, and many of those creatures make their way into Hellboy 2 in one place or another. One particular scene, located in a troll market, is a feast for the eyes and the mind, a smorgasbord of cheery, lovingly crafted beasties that feel physical and present in a way so few blockbusters even attempt.

Other standouts include a horror-infused, demonic little ditty with the aforementioned tooth fairies – Hellboy’s twisted fairy tale at its most sublime – and a showstopping smack-down in the streets against a giant plant creature that achieves an operatic grandeur and ends with one of the most humblingly gorgeous images in any 2000s blockbuster, resonating with a hauntingly melancholic majesty rooted in an awareness of poetic impermanence, the transitory nature of all things. Above all though, the special effects carry weight and emotion, alternating between wonder, horror, and even melancholy. We get the sense that the beings we encounter have stories and lives outside of their “greatest hits” like appearances here, and that del Toro is simply privy to their existence and letting us in on the secret.

What really takes the movie into the fantasy stratosphere, however, is the real heft del Toro imbues in the whole thing to keep its nimble curiousness from ever seeming truly light-weight. Some of this is script-based, with the screenplay attempting a sort of ethical quandary and doing a passable job of it. Prince Nuala himself is a strong villain in the distinctly modern vein, heavy on nuance and ambiguity. But it’s the little things that speak loudest, like the way Hellboy’s apartment is given a lived-in physicality or the gushingly and unapologetically sentimental sing-a-long that captures the film’s innocent, beguiling spirit at its most unadorned. There’s a bitter-sweetness to the film’s situation, a realization that there aren’t really any winners or losers, but simply those who have a little more time with friends.

Of course, the real pathos is reserved for the main characters in a film that takes the time to develop them as, of all things, entirely human. Ron Perlman, who was the best thing about the original Hellboy, brings his A-game as the cynically minded jokester demon with a tough exterior that likes cats and tries to hide the fact that he has quite a substantial heart. The real growth is seen in the secondary characters though. For starters, Abe Sapien (voiced and performed by Doug Jones in a stunningly cohesive combination of the visual and the aural) is given much more to do, developing an emotional attachment with Princess Nuala that gives him a more expressive personality than he had in the first film. Selma Blair is also a marked improvement as Liz, more pained but less dour than in her debut. And Rupert Evans is gone as a human agent who served exclusively as a punching bag for unnecessary exposition last time around. Through all this we get a real sense of this group as a team rather than just a collection of individuals. They’ve worn years badly and quarrels – physical and emotion – even worse, and there’s a tired, existential aura in the air. They do care for each other, however. After all, the family that slays together …

Essentially, the finished product is superior summer entertainment, and a wonderful fantasy sequel to a film I didn’t realize needed one. In fact, it’s quite a bit more than summer entertainment; it’s a genuine showcase for film as a medium of art, and that’s a rare beast. It may be hearsay, but it stacks up to del Toro’s widely assumed masterpiece, Pan’s Labyrinth, for splendor and heft, and may be the best American fantasy film of its decade. Maybe that’s hyperbole, but del Toro is a director that inspires hyperbole, and if Hellboy gets the heart running to where the head can’t and shouldn’t follow, there’s a place for that as well. Del Toro carves out that place and makes it his own.