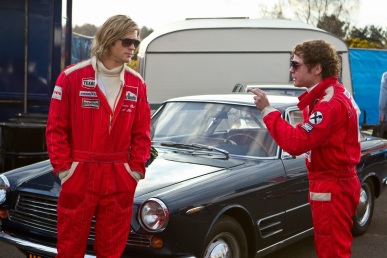 Ron Howard is not much of a director, but that doesn’t necessarily mean he’s a bad one. Instead, it means something quite a bit more literal and less qualitative, something more objective: he does not so much direct his movies as he produces them, passing them from the script to the screen. He’s a deeply functional director, archly competent when he needs to be, but it’s always been obvious he’s subservient to his material rather than demanding or deconstructive with it. He acquires scripts and actors and sets them in place, without fundamentally changing them. He’s not an artist, but a craftsman, and even then he doesn’t really show-off his craft as much as he lets it exist.

This isn’t entirely a bad thing, if he’s got a good script and good actors that push him in the right direction, and thankfully with Rush he does. More importantly, he also has an unexpected script, one that transforms car racing into an almost mythic study of ego, the male personality, and human difficulty. Deep isn’t quite the word, but its two-character interplay is surely not the modern Rocky it deeply looked like it aspired to be. It’s not meaningfully manipulative, and more shockingly, it doesn’t remotely ask that we like either of its two central characters, as much as we understand their aching humanity and anxious incompleteness. Again, not a drama per-se, and certainly not Ingmar Bergman trying out a new genre, but as a piece of pop-craftsmanship, it’s surprisingly interested in alleys that more closely approximate “pop-psychology”. Plus, it’s not the least bit didactic in doing so, instead choosing to exist as its characters do: in terms of action and reaction.

James Hunt (Chris Hemsworth) and Niki Lauda (Daniel Bruhl) not only race for a living; they live to race, a point the film makes with some measure of nuance and credibly extends to deeply obsessive levels. Hunt is all swagger and ego, a hot-shot showman with pizzaz and charisma to spare, all flesh and sweat and heart and no nuance. Lauda is a methodical, deeply anxious, eerily self-confident computer masquerading as human flesh. They’re fire and ice, and in 1976 on the Formula One Circuit, they had their way with each other before they could even realize they were spinning their wheels all along.

It’s fitting for a story of two men who use action to define worldview that the film not only replaces substance with style, but uses style for substance’s sake. In addition to Howard’s suitably sleek style, the film self-consciously reflects on the chintzy fakery of the sports film by rendering its composition less out of reality circa 1976 than pop-art masquerading as 1976. Technically, I have no idea if this was the film’s intent, but either way the colors pop with genuine energy and throttle us along like the men at the center of the film who long ago replaced personality with strut and style, and then used strut and style to double back and define personality. In particular, the film goes back and forth between visual styles to delineate the two characters, and then molds them together when they become more and more like each other.

Which in turn speaks to the fact that this is Ron Howard’s best film in a good long while, ever since he lost his way to druggy, draggy Oscarbait a long, long time ago. It’s fitting for a story about brash men who thrive on kinetic energy that he let his hair down a little and just let the wind fly through it. That’s what I meant about Howard and his scripts and actors; when he has material that requires a little muscle-flexing and at least one actor known for his pretty-boy swagger, he finds his place in line and follows suit. This is him at his most unchained, not nearly as interested in exposition and pointless sentimentality as he normally is. Indeed, the film seems less likely to insist to us how great and worthy and meaningful it is, largely because it’s far more busy demanding that we pay attention to its more fiery, free-fall kitsch and delightful verve. The film isn’t meaningfully subversive even in its style, but it doesn’t much want to be either. It’s got pizzaz, and for a director so tired and mundane these days, that’s enough. It’s all a lot of fun, even if it’s never more than a big ol’ slick piece of cake. It’s just a really well baked and decorated one, thought through with love and care.

Marketed as both a thriller and a heroic survivor’s tale, Flight is not really either, even when it occasionally thinks it’s the latter. Instead, it’s essentially a message movie in modern duds, and the fact that this message is devoutly old-school (the dangers of alcoholism) makes it seriously fascinating in today’s movie world. Yet it’s not so much surprising considering director Robert Zemeckis’ career. Always a man interested in using new-school technology to enhance and coat-over traditional narratives (and to re-read them at a visual level), even his most technologically advanced films looked to classic literary works, classic film, classic Americana history, and mostly just classic sentimental drama and gee-whiz adventure for inspiration. He’s not, then, a radical director, but he knows what he’s doing and knows how to get it done. Except when he doesn’t…which is usually when he gets too serious and thinks he knows how to direct something more than a campfire story. Curiously, Flight is his most serious movie to date, yet it’s unlike his earlier live-action dramatic efforts in that, while those films are meandering and portentous, this one is lively and mildly energetic. It’s not great filmmaking, but it’s loaded with nice touches both small and large, and that’s often enough.

Zemeckis’ story is that of Whip Whitaker (Denzel Washington), a deeply alcoholic, self-excusing man who exudes laid-back personal charm as a gossamer mask for a far deeper, more existential soul-reaching malaise. After he steers a careening, descending plane on the path to self-destruction back on course, and is heroically received, he’s tasked with similarly readjusting his own life course. If this sounds sentimental, it is, but who’s to say sentimentality can’t be well-made, or mutually exclusive to genuine depth? As filmed, Flight is the rare Oscarbait picture that manages to be pensive and melancholy without dipping into pointless solemnity, largely befitting melodramatic origins it’s never really meaningfully interested in hiding. If the film has, essentially, nothing new to say about, well, anything, it says it with flair and competence, if nothing close to gusto.

At the same time, Flight also tries to do a bit too much for its own good, especially toward an ending that moves more toward ethical legal-thriller than mournful, anxious character study. Of course, the film’s at-times questionable tonal shifts also give it an energy it would otherwise lack – John Goodman’s deliberately broad character (Whip’s supplier), for instance, has no place in the film, but Zemeckis’ direction also highlights that he, and the self-consciously loopy zaniness he rides in on, don’t belong in a film far too static for him.

Meanwhile, a late film scene plays binge drinking for delirious comedy zest when we must, due to the film’s dour tone, expect something different. But the scene immediately preceding the binge is completely non-comic, and even anti-comic. In it, we have Zemeckis’ wide-eyed, shocked-into-place camera pushed right up against a tiny alcohol bottle and staring and staring at it until it becomes a sort of holy grail, an item so beset by both fear and hopeful satisfaction that it would be a herculean effort to lift the weight off it and pick it up. We know someone lies right off-screen waiting for it, destroyed by the dissonance it reflects. And we would jump onto the screen to stop him if we weren’t as transfixed by its horrific majesty ourselves. In other words, this juxtaposition of dramatic horror and comedy is somewhat sloppy filmmaking, but sloppy can actually have the effect of loosening the screws keeping Oscarbait so rigidly safe and contained. Here Zemeckis comes close to achieving this goal.

The film’s opening quarter, however, is its best, with two scenes that rank among Zemeckis’ best. The showier one is, of course, the plane crash, which sees Zemeckis dialing up all the notches to 11 as he ravages our soul to the core with every trick in the book (and, if anything, Zemeckis is a man with a bag of tricks as deep as his money pockets). The scene is both a punch to the gut and somewhat pointedly distant, capturing us in the moment of the chaotic crash and a more poetic reflection of our precise inability to ever truly exist in this moment.

The film’s best scene, meanwhile, is its first, a wonderfully sublime piece that blends impressionist clinical distance and a poetic naturalism and gives us dozens of little-big details about Whip and the kind of man he is purely through slight visual moments in the scenery and composition. Within, Washington’s weary, hyper-lined face becomes one with the background, as though it had been in that hotel room forever and Zemeckis just caught up on a particularly sprightly day.

But these scenes are exceptions to the rule of general competence in the directing department, a shame for a man of such talent as Zemeckis. It’s a great pleasure then that he hooked up with Denzel Washington for this role, his best in ages –  when Zemeckis isn’t quite up to the task of moving from being a storyteller to being a dynamic storyteller, Washington is there to pick up the pieces, or at least to distract us so we don’t notice them. Washington is one of the rare combinations of movie-star charismatic swagger, deeply-felt chaos, and raw intensity and power, and he gives his best performance in a long time here. He implies more than he insists, and he bleeds the tired, intense, and charming with equal curiosity, like an old man trying to pretend he’s a young man and finally realizing that the wear and the years lived won’t go away with a put-upon smile. It’s at times a showy role, but it’s also deeply pensive and melancholy, essaying Whip as something far more deadening than a man beset by conflict: a man so torn apart by his conflict he can’t even be bothered anymore, a man who’s forgotten what internal debate even means. He’s the mesmerizing center of a film that often finds itself less interested in mesmerizing than in existing (thankfully, it certainly isn’t interested in moralizing). It’s a work of impressive moments that never manages to form itself into something as deceptive and dangerous as it could be. It’s, essentially, a “nice time at the movies” with a hell of a bedrock. But then, if the thing tying your movie together is its only truly wonderful feature and  is surrounded by competence, that’s hardly the worst thing a movie can be.