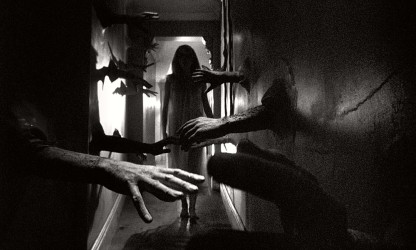 Roman Polanski blew down the doors by galvanizing psycho-sexual fervor with heated religious fire-and-brimstone when he asked us to pray for Rosemary’s Baby, but his three earlier films carve out a cavern of their own in the film world. They each build on one another, gnawing and preying into Polanski’s particular and peculiar form of bellowing salacious night-sweats. His debut, Knife in the Water, is a casual work that reveals itself a formalist’s dream, a monomaniacal machination of Deep Focus emptiness and harsh angle-populated mise-en-scene that finds in its very visual bones the piercing acuteness of his class parable. His follow-up, Cul-de-sac, maintains this carefully delineated limbo-like location-work and adds its own doses of jangled nerves, introducing a particularly controversial and transgressive dose of blackened humor to Polanski’s already darkly playful attitude toward human sexuality. END_OF_DOCUMENT_TOKEN_TO_BE_REPLACED

The supposed final directorial effort of Steven Soderbegh, huh? That’s neither likely true nor obviously false, but it’s also neither here nor there. Right now, Side Effects can stand on its own as a deliciously twisty, proudly old-fashioned, passionately constructed thriller that works largely because it’s having so much fun working us over. It’s a cinematic screw-over, and in this regard, like many others, it’s quintessential Soderbergh, and one more reminder that the famously eclectic, genre-hopping director really does have a very particular aesthetic after all. That this aesthetic is sometimes “not having an aesthetic for the sake of experimentation and letting the wind of the film follow through on whatever I want to do at this particular point in time” only makes him all the more fascinating.

END_OF_DOCUMENT_TOKEN_TO_BE_REPLACED

Equivocation, whatever it can do to abet the mind, can stultify the stuttering soul. Hyperbole, once or twice, may be the essence of wit. Permit me to speak to the winds without bourgeois constraint or prudence; it is what Charlie Chaplin, one of the most untrammeled purveyors of unrestricted emotion as a principle of good folk, would have wanted. City Lights may just be cinema’s greatest gift to the world: a truly, unabashedly sentimental masterpiece. By 1931, the time of the film’s release, Chaplin – a decade into his celebrity and his most prodigiously productive period – was confronting the flux of the world around him: in cinema, the shift from silent film to talking pictures, and in the world, a post-WWI decay threshing national boundaries into nothingness and instigating a worldwide depression. The only salve for Chaplin was the often sour sting of excessive sweetness, an emotional delicacy or an after dinner mint for some films that Chaplin preferred to envision as a main course. .
END_OF_DOCUMENT_TOKEN_TO_BE_REPLACED

Chinatown has two lead characters, and as dictated by the logic of the film noir genre, one must be male and one must be female.  And they too must share something, usually a sense of loss, an alienated nature, and a distance from society. Chinatown’s male lead is JJ “Jake” Gittes (Jack Nicholson), a private eye initially contracted by a woman claiming to be Evelyn Mulwray to find proof of her husband’s infidelity. Soon enough, he thinks he does so, only to learn he’s in for something much deeper and scarier. The lady who had presented herself as Mulwray was pretending, and when he meets the real Evelyn Mulwray (Faye Dunaway), she insists on his involvement in a different aspect of the case, one involving her husband’s now-dead body. Complications and complications arise, as they do in any noir. And this is a plot out of any noir. It’s been done hundreds of times before and since, and it seems appropriate to start here because this is Roman Polanski’s jumping-off point for paying homage to the noir genre while turning the whole thing on its head with Chinatown.
END_OF_DOCUMENT_TOKEN_TO_BE_REPLACED