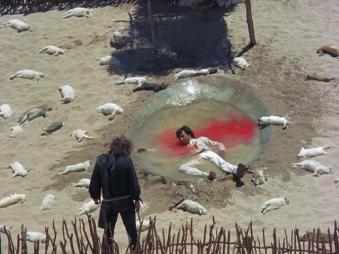 Update upon another viewing in 2017:

Is El Topo pointless then? Or rather, is it depoliticized? Or is chaos and ambiguity political and purposeful in an age of order? Simultaneously earthy and beyond the grave, the characters of El Topo do not effuse logic or purpose or even desire, but they do implode with the chaos of uncertainty, of the crushing weight of their totemic status as archetypical figures bounded by unclarifiable laws of desire and need and want they are unable to do anything about. They wander through a mass of centrifugal emptiness, never for or to or from anything; such liberal teloses hold no sway in this anti-rationalist mindspace that reveals, conclusively because of how vague and inconclusive it is, how arbitrary various masculine desires are. Or rather, how a life governed by the compulsion to complete goals is so often defined through the runaway assumptions of capitalist conclusiveness where one finishing line is the starting pace for an even faster act of running in circles. Most Westerns create male spaces of desire, empty and virginal worlds ready to be deflowered by a male character’s conquering, ordering phallic motion through space linking the edits and giving reason to this world. A contrapuntal riposte, there’s nothing to fill up in El Topo, nothing to complete, no oasis of purpose to stretch thinly across the randomness of the world in hopes of masquerading. In this sense, if the film dodges conventional meaning or any normative point, it also explodes the oppressive certainty of a social order which bounds and demarcates meaning to that which can be conventionally construed through only that order’s logic.

Writing about Mulholland Dr. recently, I began with an explication on the film’s wonderful arbitrariness, its cluster of contrarian images and sounds which existed for no reason other than to bemuse and titillate, to enrage and befuddle, and to please David Lynch. I then spent most of the review coming to terms with the fact that my opening paragraph, all praise for Lynch’s film existing for the sake of itself, wasn’t really fair: the director’s 2001 anti-film does nothing simply for the sake of itself, for it had more to say about film as an object of corporate culture and voyeuristic gaze than any film of its decade. It is not an arbitrary film; it is replete with intentional, textured meaning, and it is a masterpiece of commentary on film as object of invention and sociology.
END_OF_DOCUMENT_TOKEN_TO_BE_REPLACED