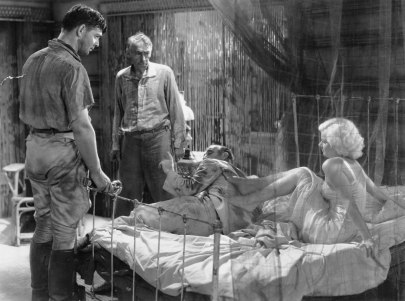 One doesn’t exactly go into a “Victor Fleming Production” and expect a kind of trashy wail covered in barbed wire. And one doesn’t get it with Red Dust, but it still feels like a specter from another world, the Pre-Code Hollywood world to be exact. In stark contrast to his one-two Gone with the Wind, Wizard of Oz punch in the most golden of Hollywood’s gilded years, 1939, the trim, rough-housed Red Dust never aspires to greatness, and as such, it is never strangled by an imaginative affinity with histrionic hyperbole run amok (the latter mode being MGM’s most cherished tone). Instead, this earthy, husky MGM film is a vortex of lusty, vulgar brashness and disreputable puncture wounds. Unfortunately, though, it’s all haunted over by the never-ending specter of colonialism  in an Orientalist world authored by the West to serve as a presentational backdrop, even a manicured garden, for white subjects to battle out their own individual problems while towering over darker faces that are little more than part of the museum-quality scenery. I suppose you can’t change everything that was part of the conservative MGM claw.

As a B-picture, it’s proud to be the nasty sliver on the back of the golden MGM Grand. Matching the steamy, salt-of-the-earth types Dennis Carson (Clark Gable) – who runs a rubber plant in Southeast Asia – and Vantine Jefferson (Jean Harlow) – a sultry, renegade prostitute – Red Dust does double-duty on the individualistic working class morality by counterposing the couple with bougie twosome in Gary (Jean Raymond) and Barbara (Mary Astor), who are visiting the plant for irrelevant reasons. Gable instigates a tempestuous romance with Barbara, but the film’s deterministic morality, where like types belong together and the aristocrats aren’t capable enough to survive in this rough and tumble jungle land, is set in stone from minute one.

And, in this case, it’s a Western-world fantasy land as well, relatively unobstructed in its treatment of the exotic Orient as a play-palace for Gable and Harlow to prove their morality by foregrounding their physical virility, adaptability, improvisation, and ability to control their own agency through physical externalization, an agency that implicitly grants them the right to control not only their own souls but the land around them. And in this fantasy, yellow faces are undoubtedly part of the land, objects for white protagonist control rather than men and women, or subjects, all their own. With only one (horribly stereotyped) non-white personality, the even more insulting force at play is the mass of insignificant “others” depicted in the background, broached with no personality except mere placement in the mental geography of this theater of the white soul. In Red Dust, the colonized world is an ahistorical setting devoted to romance between individual characters whose social control of the land and the “others” is a given assumption and an unquestioned backdrop rather than an overt question worthy of interrogation.

At least Red Dust has the aesthetics down. Gifted with two all-time cinematographers in Arthur Edeson (fresh off of All Quiet on the Western Front and Frankenstein, two of the all-time Pre-Code films) and Harold Rosson (eventually of The Wizard of Oz, Singin’ in the Rain, and my personal favorite The Bad Seed),  Red Dust rips beauty from the jaws of the imperialist mindset. From the dreamlike, star-struck soft focus to the hard-lined chiaroscuro underscoring the sexuality wafting through the night sky, Red Dust is always inching toward glimmers of beauty without sacrificing its essentially rough, even grotty, proto-sexual exterior. Which is to say, this is the kind of film that cognitive dissonance was invented for, with an unshakable apprehension of its racist undercurrent not-so-quiescently incubating in the recesses of plot beneath the antic life of the protagonists who captivate the screen.

That captivation is abetted by Gable and Harlow at their most insouciant and steamiest, ensuring that even when the usually squeaky clean MGM went dry rather than sudsy, the company still managed to get wet in some unmentionable substances strewn about from their stars’ libidinal impulses. In one of his earliest starring roles, Gable already boasts the irrepressibly robust but punctured and world-weary charisma he became famous for, as though his every smile was cobbled together piecemeal by internal loneliness he feels the need to mask over. Harlow meanwhile is as deliciously, categorically urge-driven as she always was. But her patter avoids droll routine status through the fragility she evokes in her demeanor, likewise essaying a battered loner with a desperate hunger for the kind of real companionship hewn out of hard living that Barbara and Gary can only ever approach a simulacrum of. The morality of Red Dust is that of diamonds formed under pressure, glistening only because they’re rubbed in dirt.

And, again, the morality is backed by non-whites who are distinctly denied this possibility to glisten, resolved instead to the background where the artificially constructed set lives, a set that intimates the essential fantasia of a production that reifies the individuality bestowed upon normative whites for whom race can be a mere facet of their personality rather than the crux or wide swath of their being. The physical space of Red Dust is cultivated as a curated slice of the imagination for whites to test their moral beings within rather than as a social space to digest the discursive question of colonialism or social oppression. The individualization of the story, in the classical Hollywood (and soon to be neoliberal) tradition, allows the writers to claim depoliticization while conforming to white value structures; a real leftist rabble-rouser, a Treasure of the Sierra Madre, this is undoubtedly not. The antithesis of the sterling MGM formula, Red Dust instead opts for a low-slung gutter-trash vibe, the stressed, strained knife jab to their usually radiant, flourish-ridden fencing routines. Even if this film is still somewhat middle-of-the-road anyway, it’s ultimately happy to head for the ditch, in all the ways that entails.