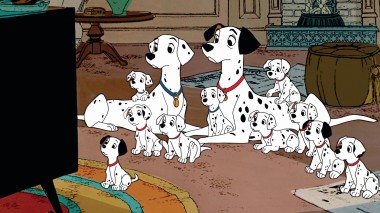 It is a go-to pocket complaint of modern Disney that, at some point, they lost interest in the mythic and left the magical by the wayside. From the dark days of the 1960s until darn near the embryonic stages of the 1990s, their films were marked by increasingly poor animation quality and a loss of exploration and heart to match. One Hundred and One Dalmatians holds the unfortunate distinction of being definitively the locus of this three decade dalliance with ground-level storytelling, the period where Disney turned its back on the skies. All of this circles around one point: One Hundred and One Dalmatians is a crying shame, and one of the most disappointing Disney features every released.

Except, against all odds, it isn’t. In fact, it is one of the best Disney releases ever, and the single best film from their wheelhouse from the 1960s until roughly Beauty and the Beast, a work which may to this day be the single-greatest Disney film ever, so saying this about One Hundred and One Dalmatians is no short shrift. The reason for the success? An animation style that would later serve as a mark of defeat here serves as an inspiration for change and difference, and a technique that would later crash haphazardly with a renewed interest in grander storytelling here is entirely smitten with the story doctoring it up. How did this style come to be? As with so many great accidents in the Disney canon, its root is in near-failure and a company at the edge of itself, crashing and burning as they madly strove for the next and newest thing to save them and restore their former glory. Or at least allow them to sleep and eat for another few months.

With One Hundred and One Dalmatians, the drunken stumbling and frenetic search for something, anything, to pull them up to their feet, worked. Maybe it was luck, maybe it was divine intervention from the animation gods. But one likes to think it was something more peculiar, more entirely fitting to the first few decades of Disney’s existence: the desperation of a company on the edges knowing full well that it absolutely has to bring its A-game next time, or less, for all they knew, their well would run dry, and that would be it. The previous feature of this particular company, Sleeping Beauty, in this case, had failed miserably at the box office. This was nothing new, but it was something of a buzz-kill. Disney had met with unmitigated failure many times before – Pinocchio and Fantasia, maybe their greatest duo of films ever, both failed to set the box office alight in 1940, and Disney was saved, arguably like the American economy writ large, by the onset of WWII. Uncle Walt, ever the old-school Americana buff and proponent of Main Street USA, wanted to do anything he could to help the war effort, and Walt the old-fashioned ruthless capitalist (naturally, he was an Americana buff after all), didn’t mind making a quick buck while he was at it.

What resulted were a series of pleasant one-offs, none particularly notable today except for their flirting with the fugitive Warner Bros. Animation entertainment very much on the rise at the time, and very much a Cartoon’s Cartoon company that cherished show business, vaudeville, and surrealist screwball antics. These ’40s films were Disney’s lightest features for quite some time, and if the 1950s saw a return to their more well-budgeted, ambitious early efforts, the failure of 1959’s Sleeping Beauty called for an intervention again. Thankfully, a whiz kid at the company and the resident mad scientist, Ub Iwerks, had been hard at work toying around with a xerox technique that greatly reduced the cost of animation, removing the painstaking texture of the inking process for something cheaper, more streamlined, and more deliberately scruffy and limited as far as detail goes. It preserved a certain lined quality that made the drawings look, if anything, like pencil sketches, a far cry from the lush (sleeping) beauties of old.

This was all well and good as far as money was concerned, but what about a film to match? Surely, an old school storybook dream of castles and magic wouldn’t do; the technical weaknesses of the animation would stunt the growth of this magic. What to do? And then, filled with a little magic of their own, Disney figured out how to do what Disney did best: turn a weakness into a strength. Bill Peet, a writer for the company, had been fiddling around with an adaptation of Dodie Smith’s book on dogs and their spots, and Pete (or someone) thought the slight, slap-dash nature of the material, and especially the randomness of the black-and-white dog spots, would pair well with the rough-hewn, unfinished style of this new animation.

And what do you know, it worked like gangbusters. Smith’s book, about a human couple and their two dalmatians whose pups are kidnapped by a dog-smuggling ring, had exactly the jazzy, improvisational quality necessary to sell the rough-lines of the story without asking for something more fleshed-out. In other words, the technical inferiority of the animation and its inability to transport audiences to a fully realized other world would only help secure the freewheeling, snappy upstart spirit of what was essentially a Cartoon’s Cartoon set in the modern, mundane world. By the looks of things, namely by the look of the opening credits which show sketches of everyday London quickly filled in with hashed, even deconstructive lines, this snap, crackle, and pop was intentional. One Hundred and One Dalmatians was released at the onset of a decade of American film that was only really any good at pop (like the 1980s at that) and had little to say for genuine stakes and dramatic art, and when in Rome…

Thus, the lounge-like, late-night cool of Dalmatians was born, openly flaunting Disney’s goofier tendencies with a zany cartoon story of fluffy dogs and capers; it lacks the sense of almost funereal seriousness pervading some of Disney’s more deliberate attempts at telling a story with weight. Dalmatians has no weight, and it is completely overjoyed at this fact. It almost has the air of a breathy sitcom, except there is sly cunning and deviousness to some of the underbelly. Take the songs, for instance, with the main male human’s own “Cruella de Vil” functioning with oil and syrup in equal measure and boasting a thick baritone kick to it; there’s a spice here, a naughty quality we hadn’t seen before in Disney. Or some of the television programs and ads, like a wonderfully subversive “What’s My Crime” TV show that may be the most genuinely inspired, most devious social critique Disney ever laid its hands on, evoking and indicting the commercialization of life in the 1960s and the burgeoning suburban culture such that a crime would now be a thing to create a game show for the middle-class out of.

And who can forget Cruella de Vil herself, one of Disney’s finest villains and the most uniquely rendered, if admittedly the most openly misogynist in construction. While the rest of the film is busy sauntering, she’s hurtling around the screen like an almost amorphous car wreck of angles or a collage of random shapes the likes of which were more prone to the more challenging, experimental UPA animation studios around this time. She is an absolutely wonderful, spirited, even cruel character design, and a design that is challenging at the level of raw contrast – her bulbous coat and her skeletal body – as well as a design that is inescapably poking fun at the commercialized, empowered women of the age. I mean, this isn’t Cinderella levels of gender-reductionism, but the distance between the artistic achievement and the morality of this character is Disney at its widest.

Still, in the end, it is hard to deny that One Hundred and One Dalmatians is a wonderfully cohesive Disney film. Cohesive, mind you, with a style no one had ever tried before, and cohesive in a way that would have broke most animation studios. Indeed, it is wonderfully cohesive with a deliberately non-cohesive, workmanlike style, and that contrast, more than anything else, sums up the genius of One Hundred and One Dalmatians, Disney at its snippiest and most off-the-rails. It just pops.